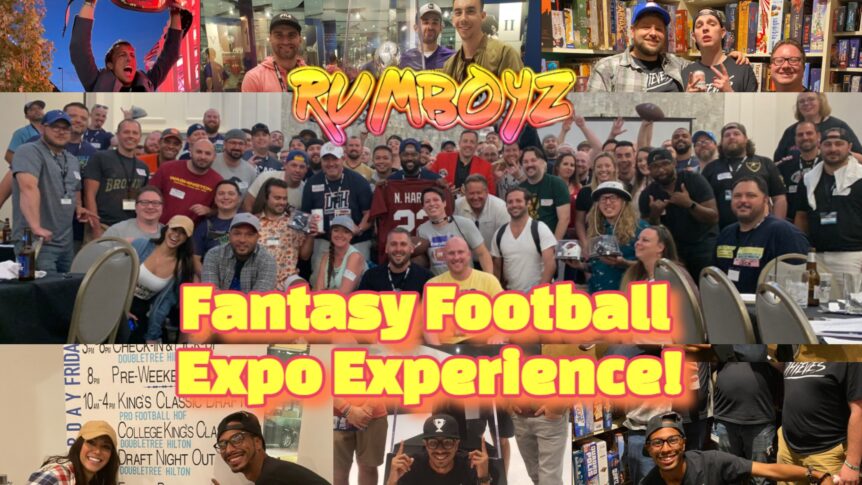 As I currently sit elevated at 50,000 ft in the air on my way home back to Colorado Springs with Kevin Gates – “Cartel Swag” playing on my headphones, I can’t help but reminisce about the amazing weekend we all had! Lifelong bonds and friendships were made and forged over a game surrounding a game, more than a few brews, karaoke, board games, and just the overall love of football.

This is my 2021 Fantasy Football Expo experience!

I didn’t feel the nerves anymore after waking up Friday morning to catch my 6:00 AM flight, so I was just ready to go. Rumboyz After Dark has featured some of the biggest up-and-coming names in the industry, so I knew for the most part at least everyone’s face, height was going to be a completely different story. The expo was held at the Doubletree, and upon pulling up, roughly 40 Fantasy analysts greet me with beers and cheers of Robbbbiiiieee, followed by more beers and check-in. After hours of everyone getting checked in it became evident it was time for the party to begin. 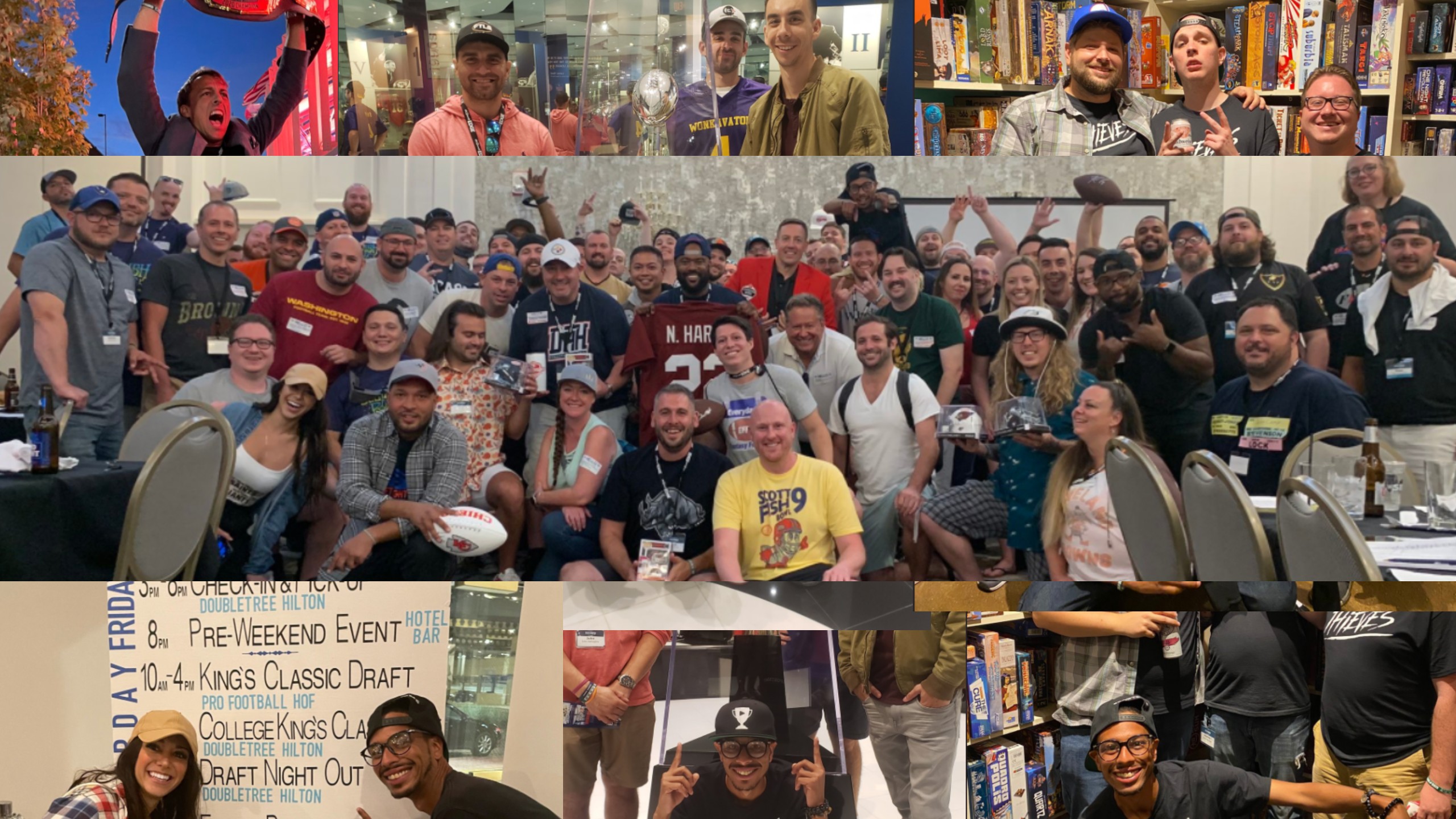 My brotha Troy King (@TKingMode) had been on site for about 2 hours now, and the Thieves Fantasy Football family had a surprise all prepared for him! Stephen Johnson (@Stephen_Roto) and I raced upstairs as night fell in Canton only to execute the single greatest rendition of a Thirsty Thursday song while Stephen danced in a Furry Fox costume. What are friends for right? We would continue the night at George’s (local dive bar) where shots of Rum and Tequila would take over for the night!

Day two introduced Draft Night Out to the world! As I woke up Saturday morning I understood that I had a responsibility to bring the energy for the draftees in attendance. A quick shower to wash off the night before and it’s time to lock-in. I dawned my headphones grabbed my “handler” and best friend John Batts (@FTLS_JBatts) and he begins escorting me to soundcheck like I’m Mike Tyson ready to walk in the ring. As I sit crouched down and zoned in our DNO lead Hus (@HusTheProphet) gives me one look. I do the warm-up speech and boom! Doors open and nerves leave my body in an instant! The microphone gripped in my right hand I begin getting the crowd going and sharing cheers. The drafts had begun, which meant some jokes and love about picks went out. Everyone was patient with our wait staff and beyond impressed with the prizes that they won. It truly made me believe that this is the future of live drafts. The night would take us to Jerzees (another Canton bar) where Bob Lung had multiple bar stations set up and lots of cigars, which was a nice touch if I may add. It was here I would meet Matt Walsh, Founder of Trophy Smack (@mwalsh_ventures), and what an incredible interaction it was from business talk to tequila, and him shipping Davis Peng (@pengpicks) a set of grillz! 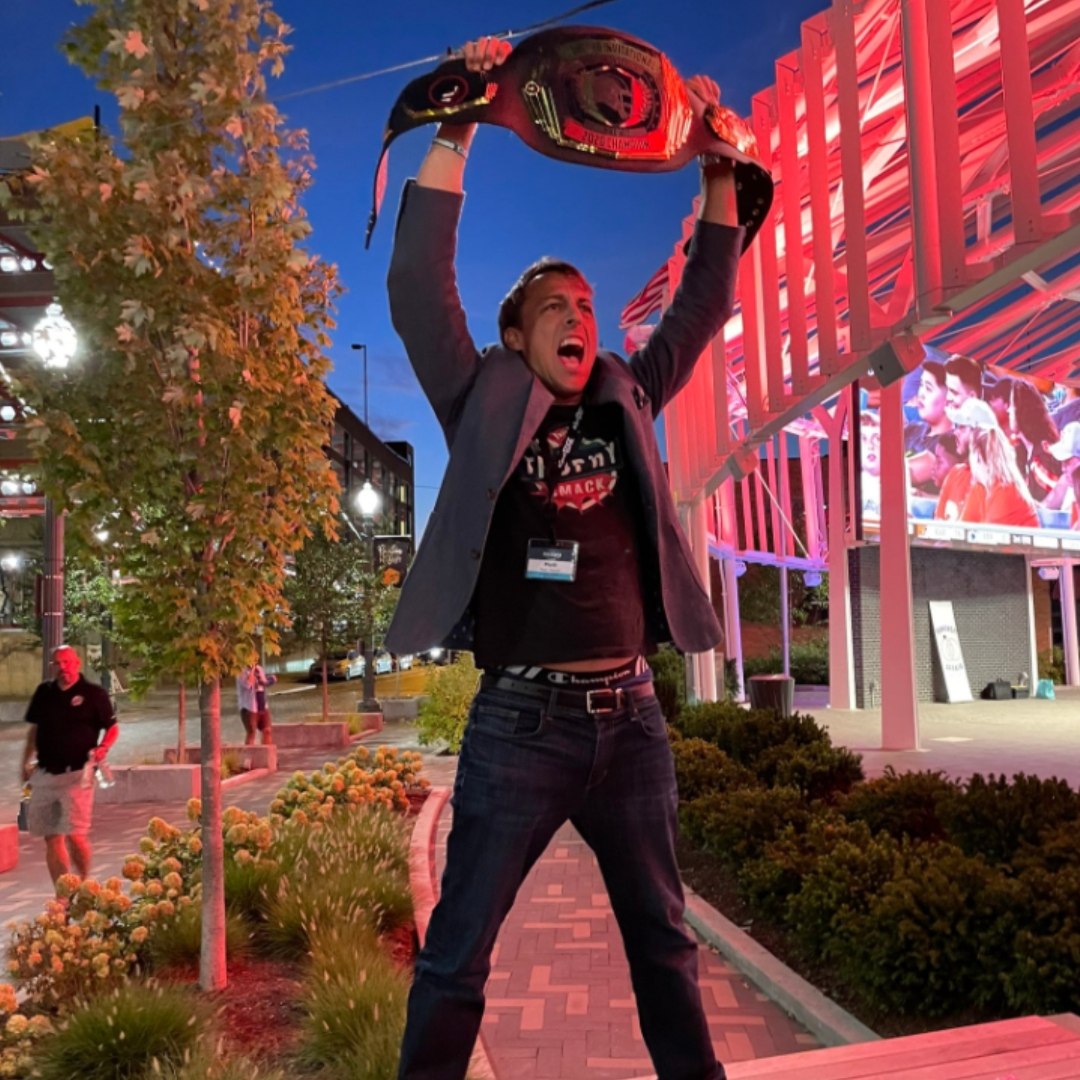 Day three brought in the actual expo itself. The event was full of networking and everyone could display their brands and their hard work in this industry. All of the exhibitors and presenters were professionals and shared a lot of insights. The hotel bar staff at this point was ready for us to leave, I think we’re all in on Keith not being the greatest at customer service, but the rest of the staff was stellar. It was the last day so there was this urge that everyone had to make the best of it. 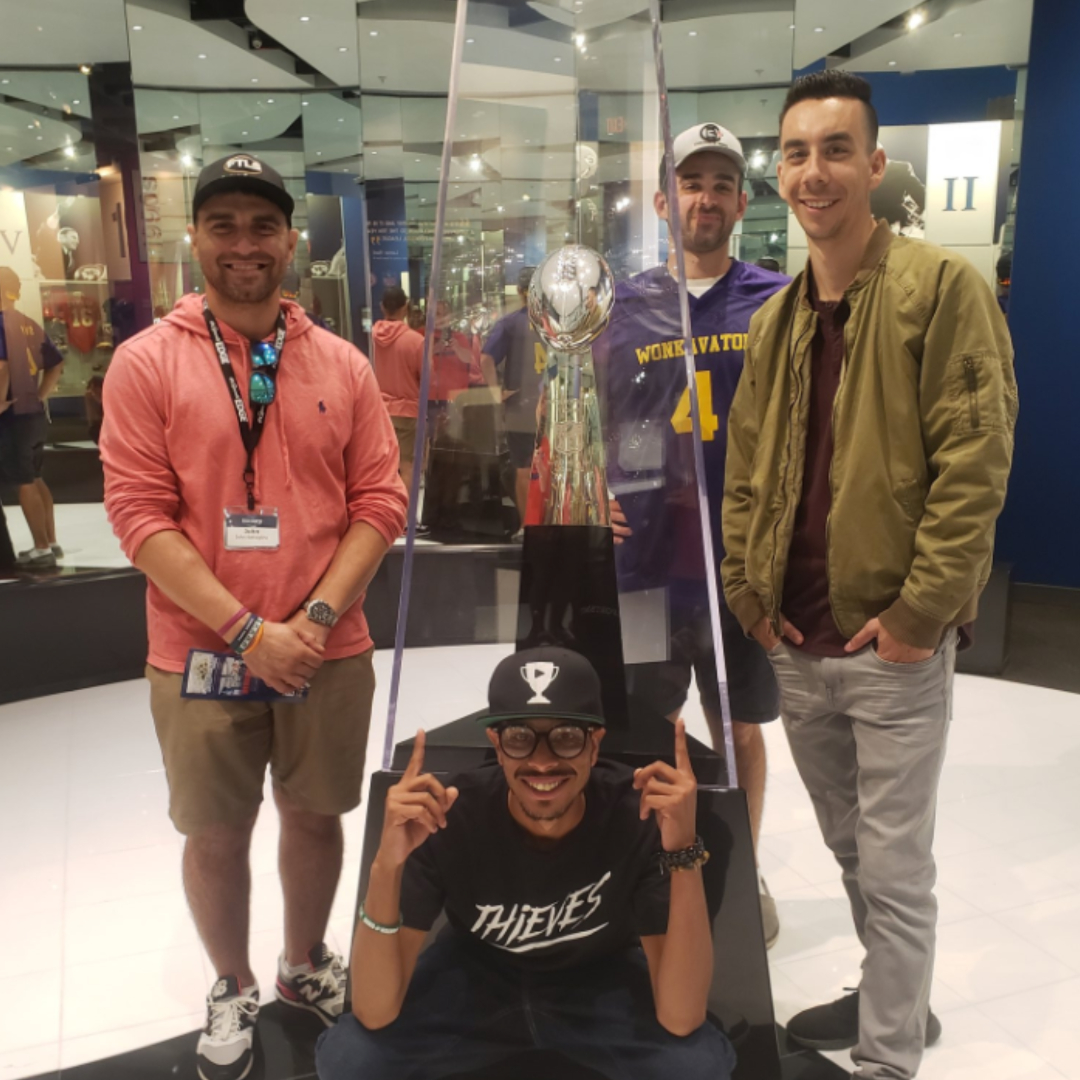 In one day we fit in the Hall of Fame with my guys John, Sven, and Matt Okada (@FantasySven & @MattOkada). What a great experience that was! I was in awe, from the Bust room to the holograms of NFL Legends to seeing a Lombardi up close. After that experience, we’d link up with the Polvogt’s Nate and Jen (@JeNateJackFF & @JenPolvogt) for more games, beers, and hot dogs with some of our closest friends in the space. 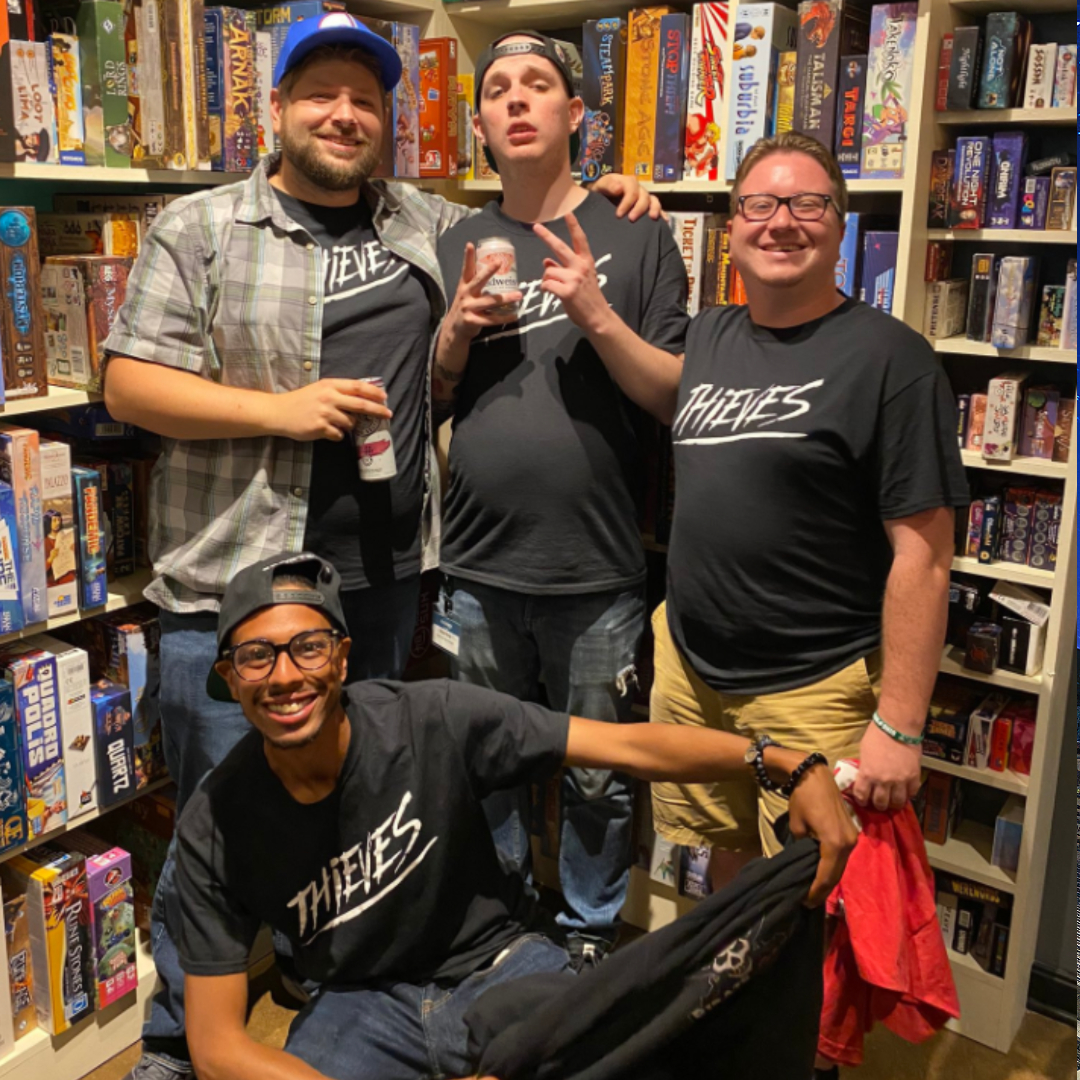 Let’s just say cards against humanity is the perfect team-building exercise for aspiring fantasy football analysts. We found a karaoke bar called Jose’s landing where Herms (@HermsNFL) got the whole club to sing Ocean Avenue and some Nickelback. Somehow I ended up taking the microphone and hosting most of the night but everyone seemed to enjoy that part as well.

The Heart to Heart!
Many of us have been in this space for at least a year or way longer. We all have that one person on Twitter that we hadn’t met before this weekend but could call at 3:00 in the morning if we ever need anything. A week and a half before this experience I almost wasn’t able to go. I let life rock me pretty hard and get me pretty low. During this trip, I had so many heart-to-heart conversations with Sam Wagman (@swagman95), Jay Felicio (@GMenJay), Shane Says (@ShaneIsTheWorst), and many more! I can’t name you all but you know who you are. Meeting my sister Stephie Smalls (@StephieSmallls) for the first time and just hugging her and wishing her happy birthday every time I saw her meant the world. 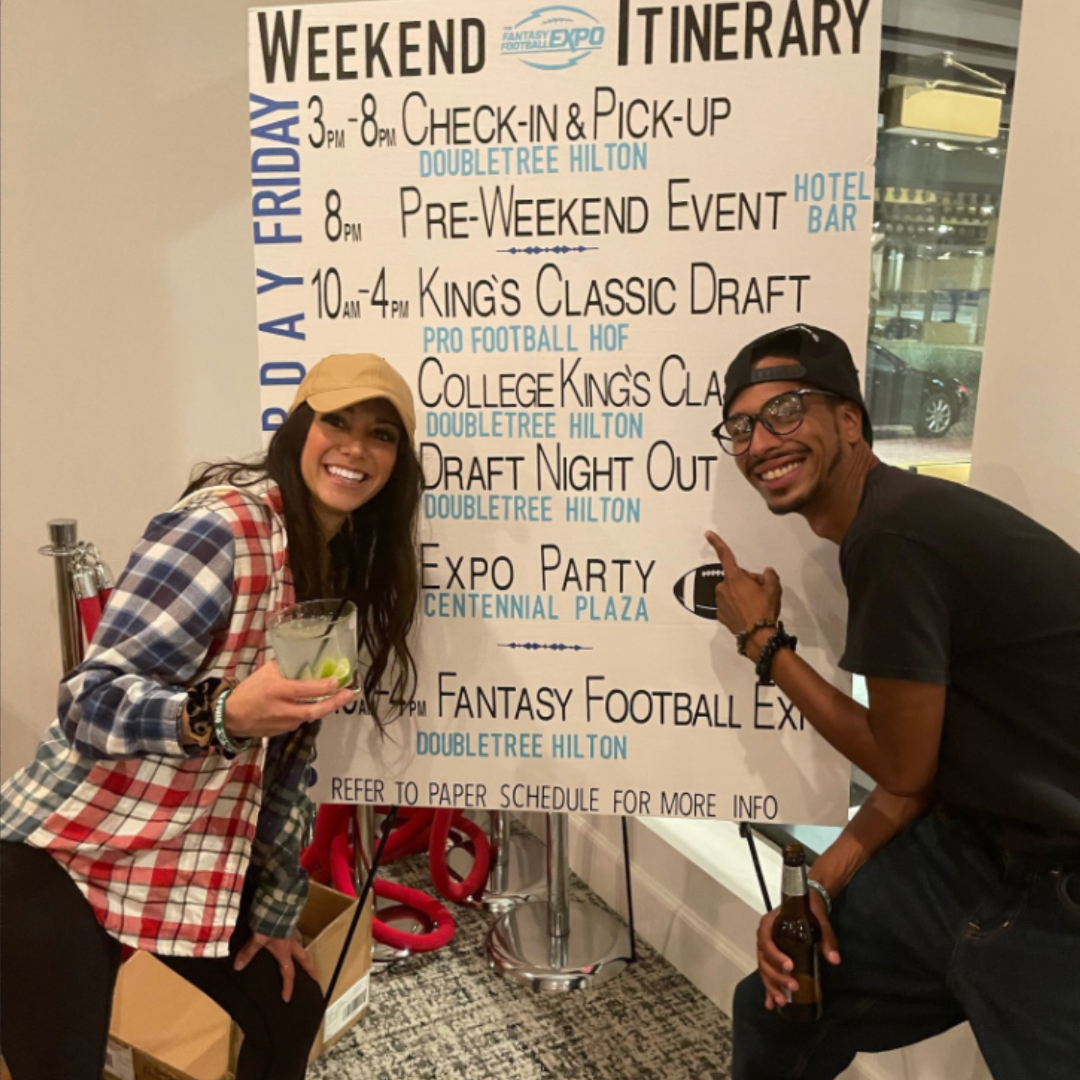 My brother LaQuan (@RealDealFantasy), with the freshest wardrobe in the industry, is as cool as the other side of the pillow. 2022 will be even better because all those that weren’t there with us this year have a chance to join us next year, but if you read this then I’ll take it as a sign WE’RE ALL ATTENDING AGAIN NEXT YEAR!