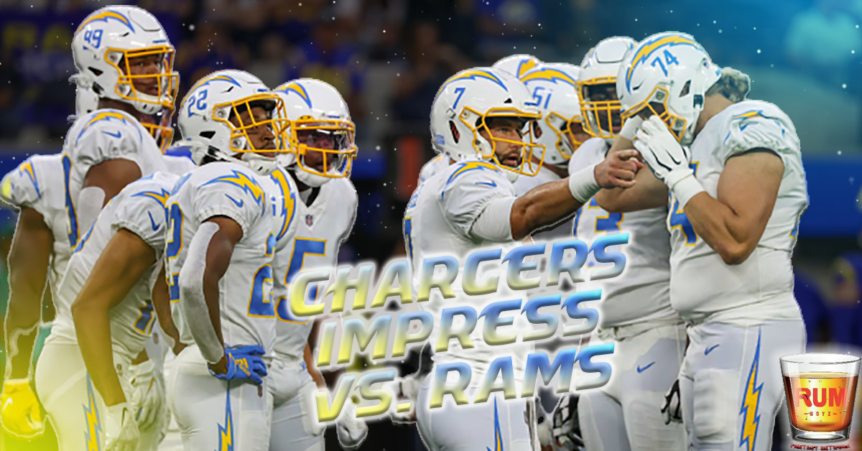 The Charger’s defense impressed against the Rams.

The Charger’s first of 3 preseason games was against the Los Angeles Rams. The game started with Chargers quarterback Chase Daniel taking the team on a 21 play, 73-yard drive that took nearly 10 minutes and ended with a 21-yard field goal from Tristan Vizcaino. One of the stars of the first drive was Josh Palmer who had 4 catches for 27 yards. Justin Jackson on the first drive had 6 carries for 22 yards. The Charger’s defense had their first chance of the year with 5 minutes left in the quarter and Kyzir White on a 3rd and 12 stopped Jake Funk for a loss of 5 yards, forcing the Rams to punt. Going into the 2nd quarter the Chargers led 3-0.

For the Charger’s first 2 possessions of the second quarter, they were forced to punt. The second of Ty Long’s punts was 62 yards but Rams running back Raymond Calais returned it 46 yards. Thanks to the return by Calais the Rams went on a 9 play 48-yard drive capped off by a 4-yard touchdown catch by Trishton Jackson. They missed the PAT making the score was 6-3 in favor of the Rams. Before halftime, Chase Daniel found Donald Parham for a 22-yard catch, followed by another 6-yard catch a couple of plays later in the drive which concluded with another 37-yard field goal by Vizcaino. Going into halftime the game was tied at 6.

To start the 3rd quarter the Rams started with the ball. On the Ram’s first drive, Chargers linebacker Emeke Egbule recorded the first sack of the game for the Chargers for a loss of 3. On the Charger’s first possession of the second half, Easton Stick and the offense took a risk and went for it on 4th and 1, and oh did it pay off. Running back Larry Rountree broke off a 25-yard run. Four plays after that, running back Darrius Badwell ran up the middle and scored giving the Chargers their first touchdown of the season and they led 13-6. Devlin Hodges comes back in and the Rams drive but miss a field goal.

Going into the 4th and final quarter the Chargers led 13-6. Devlin Hodges was able to get the ball down to the 2-yard line but on 4th down John Brannon intercepted Hodges in the end zone and returned it to the 13-yard line. Larry Rountree continued his impressive debut and ran for 24 yards to seal the game. In his first game as a Charger Larry Rountree ran for 63 yards.  The Chargers next preseason game is against the San Francisco 49ers on August 22.