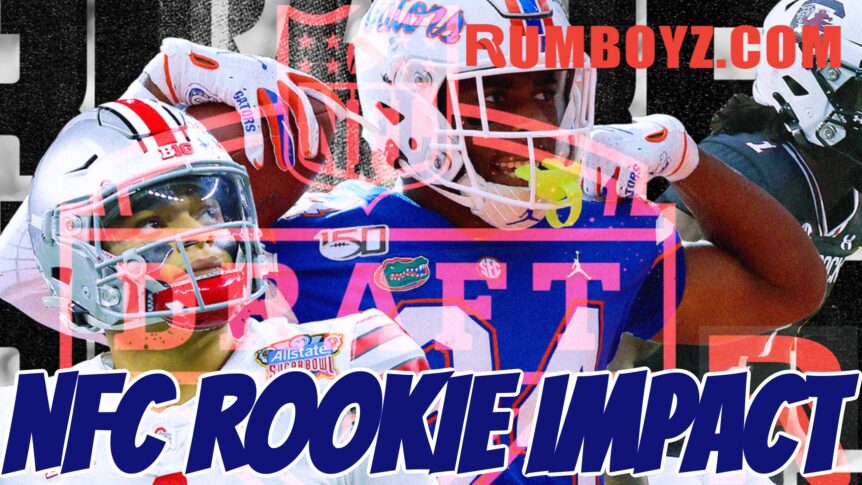 With the AFC rookie impact article being released last week, it’s time to look at the NFC rookies in the rookie impact part two! These rookies are being looked at through a Standard, PPR league lens and are organized through three categories, instant impact, moderate impact, and players to sit on until they get their opportunity. Once again, a lot of hidden talent this year, but which rookie is going to win you that fantasy championship?

Kyle Pitts, TE, Atlanta Falcons
2021 Projection: 112 Targets, 71 Receptions, 818 Yards, 7 Touchdowns
As many know, Pitts was one of the spotlight players to look out for back in early April before the draft. The Florida prospect is one of the best tight-ends scouts’ have ever seen. He plays with an elite combination of speed, hands, and athleticism that makes him an unstoppable force. Running a 4.40 40 yard dash can worry opponents as the big man has the entire skill set of a 2020 Darren Waller. With rumors surrounding Atlanta regarding Julio Jones departing, if this move is made it would make Pitts the number two option on a pass-first team. Pitts has the potential to end the year as a top 3 TE.

DeVonta Smith, WR, Philadelphia Eagles
2021 Projection: 120 Targets, 73 Receptions, 1000 Yards, 6 Touchdowns
Smith was the reigning Heisman Trophy winner last season where he was completely dominant in 2020. The Eagles knew they required a star-wideout, so the team traded up to ultimately draft him 10th overall. Minus his size, his versatility and quickness are top-level along with his ability to create space. With Smith reuniting with college QB Jalen Hurts, the chemistry will already be put in place. Smith will most likely be the Eagles’ WR1 as the depth chart is very slim in that position. If Hurts develops to a manageable quarterback, Smith has a great chance of being a WR3/FLX play by week one, while recording 1,000 yards in 2021.

Justin Fields, QB, Chicago Bears
2021 Projection: 3300 Yards, 22 Touchdowns, 11 INT, 500 Rush Yards, 5 Rush Tds
The Ohio State product amazed millions with the 2020 playoff performance he was able to pull off. The 6-foot-3 mobile quarterback has top-level accuracy with a fantastic arm. Despite being a mobile quarterback, he has proven that he is a very effective passer. Now joining the blood-thirsty Bears, veteran Andy Dalton is however supposed to be the starter in week 1 despite Coach Matt Nagy not officially naming their guy, but even so, Dalton won’t see more than three games as the Bears starting quarterback. Fields’ will have a good young offense to work with (Allen Robinson, Darnell Mooney, Marquise Goodwin, Jimmy Graham, Cole Kmet) and arguably one of the NFL’s deepest running back committees (David Montgomery, Tarik Cohen, Damien Williams). If Fields gets the early year start which I believe will happen, we could see the upcoming of a new Desean Watson in Chicago.

happy friday everyone, just a reminder that @justnfields did this to a Brent Vendables defense.😉 pic.twitter.com/asjoqkDkLs

Amon-Ra St. Brown, WR, Detroit Lions
2021 Projection: 80 Targets, 57 Receptions, 750 Yards, 4 Touchdowns
St. Brown wasn’t a highly scouted player, as he was selected in just the fourth round of April’s draft. The USC wide receiver lined up in the slot for the majority of snaps last season, which he looks to continue doing at the pro level. The Rookie has a great chance of landing the most targets on the team since the Lions’ new wide receiver room is Breshard Perriman and Tyrell Williams. Newly acquired quarterback Jared Goff has a resume for using his slot receivers, as Rams WR Cooper Kupp has taken the league by storm the past two seasons. St. Brown could be a great flex option throughout the season, however, there are still a lot of question marks surrounding the Lions’ offense. Although St. Brown wasn’t a highly drafted player, his ceiling is a lot higher than the majority of the 2021 class.

Kadarius Toney, WR, New York Giants
2021 Projection: 78 Targets, 52 Receptions, 678 Yards, 3 Touchdowns
Toney was selected in the first round by the Giants. Another receiver joins an already crowded room. With Sterling Shepard, Darius Slayton, newly acquired Kenny Golladay, and still having Saquan Barkley and Evan Engram; Toney is going to have to earn his playing time and targets. However, the former Florida wideout has the hands, quickness, and talent to do so. As one of the more exciting wide receivers to watch, Toney has a high ceiling, but fantasy players have to be cautious with the possibility of a year one limited roll.

The Giants select Gators WR Kadarius Toney with the No. 20 pick in the #NFLDraft 😤 pic.twitter.com/VXQND9TAlL

Terrance Marshall, WR, Carolina Panthers
2021 Projection: 73 Targets, 50 Receptions, 556 Yards, 3 Touchdowns
Marshall was another LSU star who shined last season. His speed and insane catch radius gave the Panthers hope while drafting him 59th overall in the draft. The notable understanding that comes with Marshall, is that he is coming on to the Panthers as their WR3, behind Robby Anderson and DJ Moore who lived up to expectations last season. The positive is Carolina released swiss army knife, Curtis Samuel, leaving 77 receptions up for grabs. Samuel lined up in the slot majority of snaps last year which also benefits Marshall as he lined up in the slot 88% of snaps at LSU. If newly acquired QB Sam Darnold has a solid season, Marshall most certainly will be fantasy relevant.

Trey Lance, QB, San Francisco 49ers
2021 Projection: 2500 Yards, 15 Touchdowns, 9 INT, 400 RSH Yards, 5 RSH TDs
The superstar college quarterback was the 3rd overall pick in April’s draft. Despite not playing in 2020 due to COVID, the mobile quarterback has unstoppable athleticism with a very strong arm. Lance would be an “Instant Impact” player if we had a closer look into the 49ers quarterback situation. Many believe Jimmy Garoppolo will be the week 1 starter and a possibility that he may start for the first half of the season. This of course affects Lance severely, but his moment will come sometime this season. Lance is worth a late-round pick and the moment he gets his chance he will shine.

Rondale Moore, WR, Arizona Cardinals
2021 Projection: 54 Targets, 43 Receptions, 498 yards, 3 Touchdowns
The Cardinals drafted the Purdue slot receiver in the second round of April’s draft. Despite being 5-foot-7, his speed allows him to create space. Running a 4.28 40 yard dash at the combine gives us hope that he will see a lot of field time, however, Arizona already has a very crowded WR room (D. Hopkins, A. Green, C. Kirk, A. Isabella, K. Johnson) which worries fantasy owners on how many targets the rookie will receive. Moore is a player to keep an eye on, but I wouldn’t expect him to see his time till the second half of the season.

Sit on and wait…

Amari Rodgers, WR, Green Bay Packers
2021 Projection: 59 Targets, 39 Receptions, 450 Yards, 3 Touchdowns
Rodgers was a third-round selection in April’s draft, where the 5-foot-9 Clemson athlete can do anything on the field. Taking kick returns, catching the ball, and even rushing here and there; there isn’t something he can’t do. The big question isn’t his talent however, it’s of course the drama going on in Green Bay surrounding their superstar quarterback, reigning MVP, Aaron Rodgers. Hypothetically, let’s say he plays this year for the Packers. If this was the case, Rodgers (Amari) has a chance to be one of the best rookie WRs this year. Despite there being a few wides listed ahead of him, there isn’t anyone that he cannot pass besides pro-bowler Devante Adams. There are way too many question marks to draft him at a value pick, but a late-round consideration should be sat on.

D’Wayne Eskridge, WR, Seattle Seahawks
2021 Projection: 50 Targets, 25 Receptions, 400 Yards, 2 Touchdowns
Seattle used their 56th overall pick to select the Western Michigan wide receiver. Eskridge had one of the leading YPR at 21.8 last season, using his speed and track skills to use separation. Eskridge is joining D.K. Metcalf and Tyler Lockett, a pair who have shined these last couple of seasons. However, the WR3 spot is wide open for the rookie to take advantage of, but how far does that get him on a run-heavy team with two elite WRs already rostered. Eskridge is a player I would sit and wait on since his opportunity and touches will appear more in the second half of the season. His value right now is no more than a late-round selection.

Dyami Brown, WR, Washington Football Team
2021 Projection: 55 Targets, 35 Receptions, 400 Yards, 3 Touchdowns
Brown was a third-round draft pick out of North Carolina. The 6-foot-1 wideout is known for his deep ball routes and tough attitude. The problem surrounding Brown in college was his drop rate, however many believe this will be fixed at the pro-level. Being the WR4 on Washington sitting behind Terry McLaurin, Curtis Samuel, and Adam Humphries, there is a good chance Brown will have his time to shine, but I wouldn’t expect it for at least a couple of weeks. Brown’s value is higher in dynasty-style leagues, but for standard leagues, he’s a player to keep an eye on.