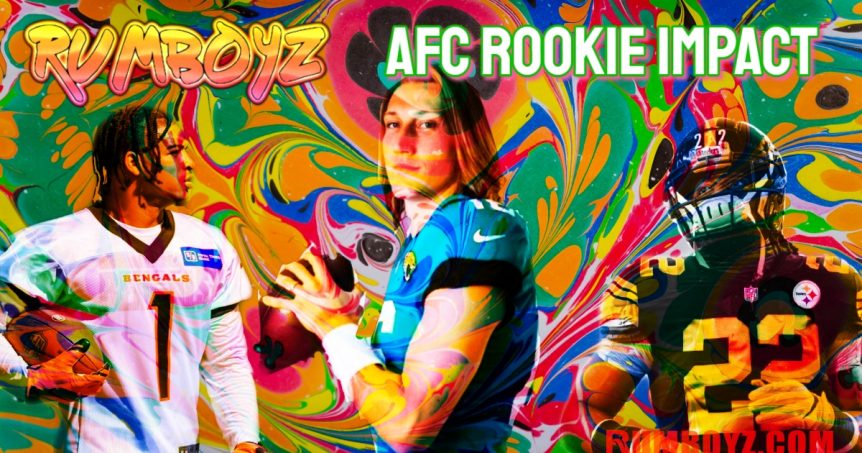 It is never too early to look and examine the upcoming rookie class for this year’s fantasy football season. There are plenty of high level skill players this year so let’s get right into it and take a look at the possible superstars for next season. These rookies are being looked at through a Standard, PPR league lens and are organized through three categories, instant impact, moderate impact and players to sit on until they get their opportunity.

2021 Projection: 115 Targets, 69 Rec, 958 Yards, 6 Touchdowns
Reuniting with his former college QB Joe Burrow is always something that gets football fans excited. Selected by the Bengals with the fifth-overall pick, the LSU rookie is a fast, versatile wideout with multiple game-changing skills. Playing time won’t be an issue for Chase, as the WR3 for the Bengals was on the field for 82% of their plays last season, 2nd in the NFL. Chase has elite upside and is right away on WR3 radars.

2021 Projection: 107 Targets, 58 Rec, 877 Yards, 5 Touchdowns
Waddle was the second wide receiver taken in the draft last April. Arguably the most explosive WR in this year’s class, his playmaking ability is next level. Although he was criticized for not participating this last season for college football, Waddle is looking to get back on track to being one of the top WRs in the game. Expecting to be the 3WR on the Dolphins, Waddle will have to be a massive part of this offense for Tua Tagovailoa to get points on the board. Waddle has upside, but at the moment sits as a WR3 / Flex player.

2021 Projection: 226 Carries, 1,009 Yards, 7 TDs, 51 Rec.
Harris was the first running back drafted in the draft, and the standout Alabama RB is something special. Standing at 6’2, 230 pounds, he has the hands of a receiver with recording the 3rd best forced missed tackles averaging about 3.1 a game. With James Connor out of the picture, Harris will expect to see immediate attention setting his bar to RB2 range with RB1 upside. The only thing that worries Harris’ production is the Steelers brutal O-line, but that won’t stop his carry rate.

I have no clue if Tebow is gonna work in @Jaguars or not and the chips are stacked against him—-but with this dude @Trevorlawrencee throwing to him—who knows. Lawrence is that stupid good…#timtebow pic.twitter.com/9o4XnNlune

2021 Projection: 4159 Passing Yards, 25 Touchdowns, 14 INT
T-Law has had the hype surrounding him since he was in 8th grade. It is finally time to see what the 1.1 has in store for us this season. I expect Trevor to find his groove early, despite being on a new team. However, Trevor will be down in a lot of games, being that the Jags simply will not be a playoff contender this year; meaning T-Law will have a lot of opportunity to try to put points on the board. He is ranked just outside the top 10 for QBs on most pre-draft sheets.

2021 Projection: 138 Carries, 700 yards, 4 Touchdowns, 60 rec, 470 yards
Etienne was another one of Jacksonville’s first round draft picks. Kind of a question mark to hear his name, as the team seemed to already have a 1RB as in James Robinson, who was absolutely phenomenal last year. As soon as the draft pick was made, Coach Urban Meyer said he expects Etienne to see a “3rd down role”. Etienne will need some time before we see his true capabilities as it was made clear there will be a time-share in Jacksonville. Etienne will be a great pass-catcher this year, but again shouldn’t be the leading rusher on his team year one.

2021 Projection: 75 Targets, 48 Rec, 698 Yards, 3 Touchdowns
Bateman joins Lamar Jackson and crew which pleased many Baltimore fans as Jackson now has a solid looking WR core. Bateman is expected to be the WR3 on that team, sitting behind Hollywood Brown and Sammy Watkins on the depth chart. Bateman will be an interesting player to watch over the season, but one has to keep in mind the Ravens will always be a run-heavy offense.

2021 Projection: 182 Carries, 810 Yards, 7 Touchdowns
The New York Jets lacked heavy rushing attempts last year, as the team had to depend on veteran Frank Gore to manage the workload. However, drafting Carter and signing Tevin Coleman upgrades the rushing game tremendously. Carter won’t see as many touches through his first 3-5 weeks, but this young offense expects Carter to see a large role, and so do I.

2021 Projection: 3900 Yards, 21 Touchdowns, 3 Rush Td, 14 INT
Zach Wilson, as many know, was the second overall pick and the second QB taken off the board in April’s draft. Wilson was a great college football player at BYU and is looking to use his arm strength and accuracy to help the Jets. The problem here is that the Jets have very limited options with a very poor team. Corey Davis, the ex-Tennessee wideout, is set to be their WR1 this year. They also roster Elijah Moore (see below), Jamison Crowder, and Denzel Mims, but will that be enough? Wilson will be able to find the endzone, but I am concerned about how well he can do in his first year with a struggling Jets team.

2021 Projection: 74 Targets, 48 Rec, 607 Yards, 4 Touchdowns
Moore was the 34th pick of the NFL draft.  His speed and quickness are his the traits that he possesses that will open eyes. The Ole Miss wide receiver may have a smaller frame, but he has deep play capability, which will make him an exciting wideout to watch this year. There are some cloudy areas in Moore’s outlook, as the Jets have a very crowded, but not so competitive wide receiver crew (Corey Davis, Jamison Crowder, Keelan Cole, Denzel Mims), and has a rookie quarterback. Moore will definitely be a draftable player, but expect him to excel closer to the second half of the season.

Sit on and wait…

2021 Projection: 162 Carries, 678 Yards, 5 Touchdowns.
Williams was a very successful runner at North Carolina last season and was one of the first picks drafted in the second round. Williams had incredible stats last season, having the second best YAC (4.1) and forced missed tackles (3). The aggressive rusher will have to battle for playing time, as Willams will most likely be splitting second RB reps with Royce Freeman, with Melvin Gordon expected be their starting running back. Williams will start slow, but can be a Flex play come the second half of the year.

2021 Projection: 80 Carries, 400 Yards, 4 Touchdowns
Stevenson is a very physical back who was taken in the fourth round of April’s draft. The 230 pound running back somehow manages to be quick and shifty while being one of the best tackle breaking rookies in the class. Stevenson also averaged 12.8 receiving yards per catch which would fit perfectly in an offensive system centered around Cam Newton. Damien Harris wasn’t anything special last season, so I can easily see Stevenson taking the leading role by the end of the year.

2021 Projection: 1700 Yards, 10 Touchdowns, 6 Int, 1 Rush Touchdown
Mac Jones was the fifth QB taken in this year’s draft and landed right where he wanted to be, under Coach Bill Belichick. The problem with the pocket passer is he plans on being an understudy for the first half of the season, as Cam Newton projects to be the 2021 starting QB. Jones won’t be a quarterback I will be drafting, but could be worth looking at in SuperFlex leagues.

2021 Projection: 57 Targets, 39 Rec, 500 Yards, 3 Touchdowns
Collins, for those who do not know, was the third round pick for the Houston Texans. If Deshaun Watson were to start week one, Collins would look to take Fuller’s targets as the Michigan star has a massive frame, standing at 6-foot-4, 215 pounds. The Quarterback situation is still up in the air though. Collins could be a sneaky rookie this season, where a last round draft pick could come to good use as the Texas do not have another real WR2 currently rostered.