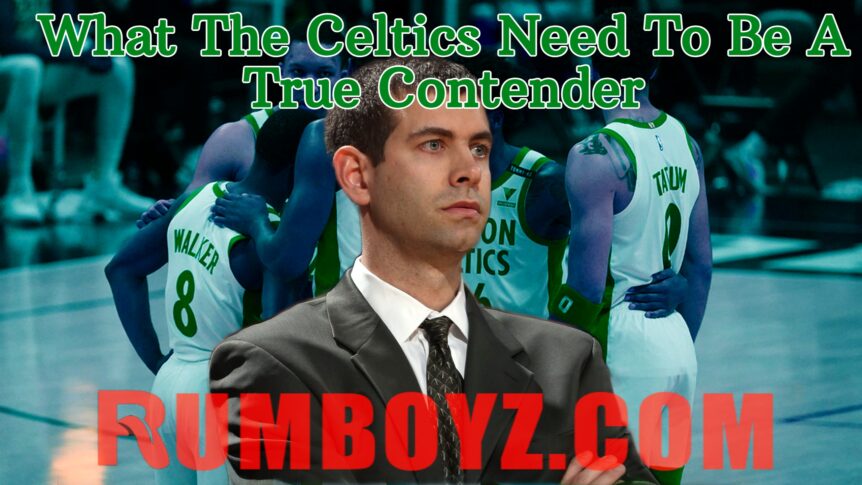 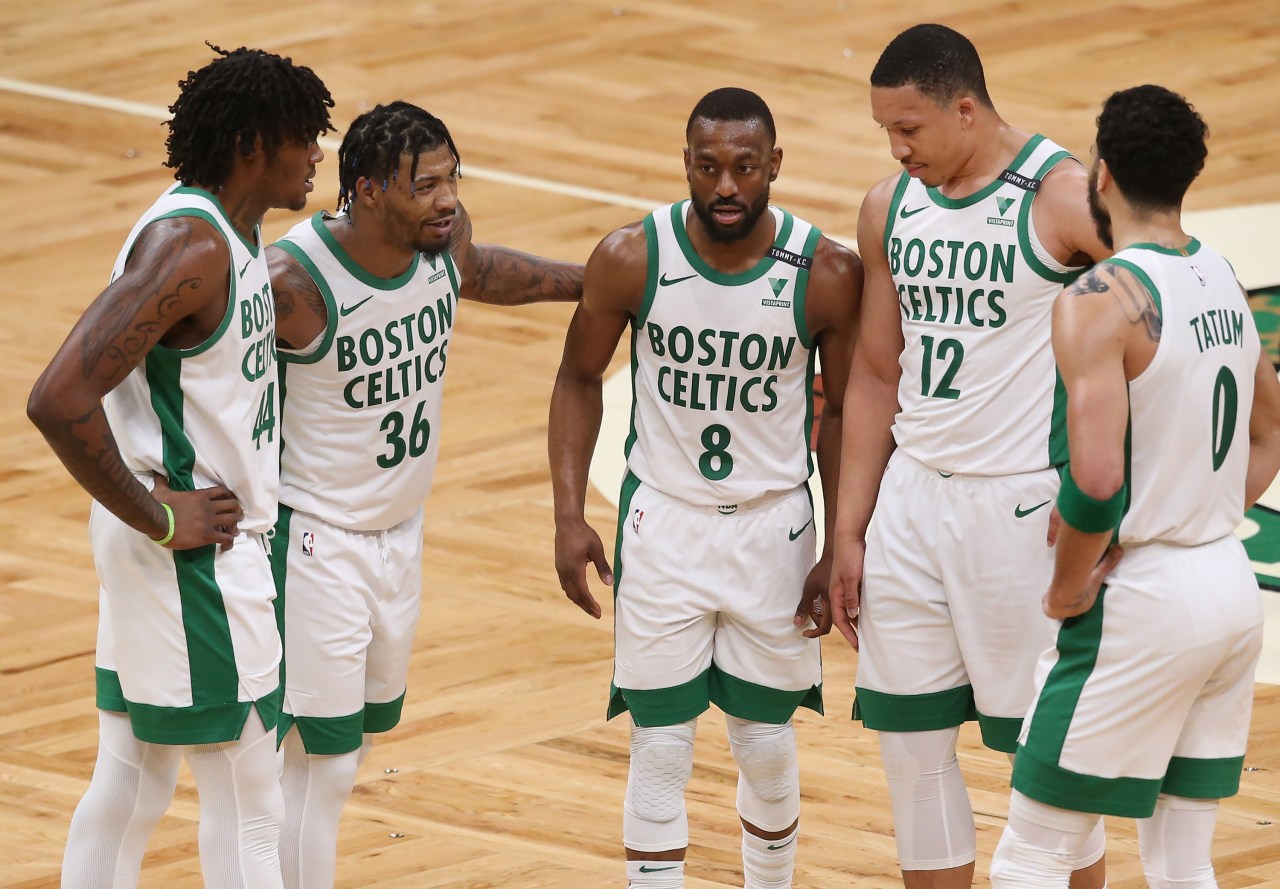 The Celtics are supposed to be a superpower in the Eastern Conference, instead they are clinging to the playoffs. Let us breakdown how they can become that dominant force.

The Boston Celtics were tabbed as one of the best team’s in the Eastern Conference after reaching the Conference Finals in 2020, and doing so without Kemba Walker at 100%. The Celtics were supposed to come into 2021 as one of the best teams in the NBA with possibly the best young nucleus of players around. Yet as we wind down the regular season in 2021, the Celtics are clinging to a playoff spot, most likely having to play as one of the play-in teams. So what is going on with the Celtics and why are they gripping to a .500 record? Lets take a look at the factors as to why this is.

Lack Of A True Playmaker

Since Brad Stevens joined the Celtics as head coach in 2013, he has been regarded as one of the best coaches in the NBA, and rightfully so. If you look at when he was at his best, it was with a true playmaking point guard, or at least with a true playmaker on the court. In 2013 the Celtics finished worst in the Atlantic division. With little roster turnover, Brad Stevens brought his team from a 27 win team to a 40 win team and 8th seed in the playoffs in 2014. What changed for 2014, the additions of both Isaiah Thomas and Evan Turner.

Isaiah Thomas was a scorer through and through, though his playmaking was overlooked as he averaged just under 6 assists per game during his tenure with the Celtics. The biggest thing overlooked though was the presence of Evan Turner. In 28 minutes per game he averaged about 5 assists during his time with the Celtics. Once Evan Turner moved on, all eyes were still on scoring point guard Isaiah Thomas, yet the offense flowed best through center Al Horford. Horford trailed only Thomas is assists per game though the team flourished behind Thomas, who averaged 12.5 win shares per game. In 2017 the Celtics traded Isaiah Thomas in a deal landing superstar Kyrie Irving. Though Irving had a great year, he missed the playoffs, yet they still brought the Cavaliers to a 7 game series loss at the hands of Lebron James.

This is when we saw the play shift. The emergence of both Jayson Tatum and Jaylen Brown caused less ball dominance by Kyrie Irving which in turn left him disgruntled. now you had three true scorers on the team and Al Horford moved on. The selfless player that was Al Horford and his playmaking was missed. Kyrie Irving decided to walk leaving a huge void in the Celtics back court. They were then able to lock up Kemba Walker on a max deal. Was this the right move though? I love Kemba Walker, being a Connecticut native, though his fit in the system is murky. Many thought Irving was the perfect fit for the Brad Stevens system because of his ball dominance and the way Isaiah Thomas thrived in it. The difference is Thomas played with tons of heart and selflessness, always playing to help the team win. Walker is a mirror of Kyrie Irving and they do not have the interior presence that helps facilitate the offense.

With Walker on the squad, the team has not been able to get over the hump and make it to the finals. With Walker, Brown and Tatum all on the team and scoring at a high level, who do they run the ball through? They do not have that true playmaker and facilitating player that will run the offense and make the smart play at the end of games. It is all one on one basketball to end games, which is why the Celtics have a tough time closing games out. As much as it pains me to say, the Celtics should put Kemba Walker on the trade block and try to land a pass first, intelligent point guard. In Brad Stevens system, he showed early on during his tenure in Boston, that ball movement is a key to success. This brings me to my next point…

Early in Stevens’ time as the Celtics coach, the team lacked a true superstar. He took a team who had its best players consist of Rajon Rondo, Jeff Green, Jared Sullinger, and Isaiah Thomas. Thomas was acquired midseason during Stevens’ second year as the coach, who was playing sixth man for the Suns. Thomas came over and instantly made the Celtics better and the team, though he ran Brad Stevens system, which consisted of off-ball movement, off-ball screens, and side to side and inside out ball movement. The only one-on-one play was when Thomas was needed to take over in the 4th quarter, a moment in which he thrived in. Thomas instilled this game plan with the coach over the next two years and became one of the favorites for MVP in the 2016-2017 season where he averaged 28.9 points and 5.9 assists per game and finished the regular season 1st in the Eastern Conference.

After Thomas’ historic season with the C’s they unfortunately traded him for head Strong Kyrie Irving. Irving’s game style is playing one-on-one ball and drive and kick out plays. Irving is one of the premier points guards at creating their own offense. This game style almost instantly proved problematic for the team. Irving never vibed well with the youngsters, calling them out publicly. The ball movement ended and so seemed Stevens’ ability to control the game. Now with Walker at the helm, they have yet to revert back to Stevens’ game plan that brought a talentless roster to the playoffs. A game plan that was focused on finding the open man and the best shot possible. As good as Kemba Walker is, he is not the alpha on the team, which means his ability to score is not necessarily needed.

The Celtics already have great scorers in Jayson Tatum and Jaylen Brown. Plus they have great spot up shooters in recently acquired Evan Fournier and rookie Aaron Nesmith. What they truly need is a pass first point to run the offense and execute the plays that Brad Stevens draws up. Brad Stevens is the biggest key to success for the Celtics team, yet is the tool least utilized these days. Tatum and Brown are superstars and elite scores, lets bring in a facilitator who can run Stevens game plan which will help put the two scorers in the best position to succeed. They need to allow Stevens to scheme them open, instead of put all the pressure on themselves. The days of constant one-on-one basketball need to end in Boston.

Who Should The Celtics Target

Rubio is no spring chicken at 31 years old, but he could be exactly what this offense needs. He is a pass first point guard, averaging 11 points and 7.6 assists per game as career averages. To boot he only averages 2.6 turnovers per game. Rubio excels at finding the open man and could do a great job at getting Tatum and Brown the ball in the best spots to score. He sees the floor with great vision and is a great fit to run this offense.

Dinwiddie showed true superstar potential when he was running the offense in Brooklyn, then came the cancer that is Kyrie Irving. He put up 20.6 points and 6.8 assists per game in the 2019-2020 season though was relegated to a bench role in 2021, only to partially tear his ACL. Dinwiddie’s fit is seamless with the Celtics. He is an excellent distributor with the ability to be a third scoring option. Though scoring will not be what they sign him for, he is still capable of taking games over.

Bol Bol is a bit of a pipe dream, though one that can be acquired via trade. The Nuggets are stacked at the forward positions and Bol does not have a clear path to minutes. Their starting point guard Jamal Murray just went down late this season with an ACL injury. If the Celtics can work salary and acquire Bol via trade for Walker, his presence would be huge. Bol has fantastic vision and the Celtics could get back to working the inside-out game like they had with Horford. Bol can also step outside and provide a three point presence from the center position that should pull big men out of the middle on defense opeing lanes for Tatum and Brown.

The Celtics problem to me is clear…a lack of true playmaking and the need to implement of Stevens’ game plan. They still have a fantastic young core, just seem one true piece away from being a legitimate championship contender. Hopefully they can take advantage once again of the unreal brain they have on the sidelines, and kill this one-on-one ball dominant game that has killed the chemistry of the team.