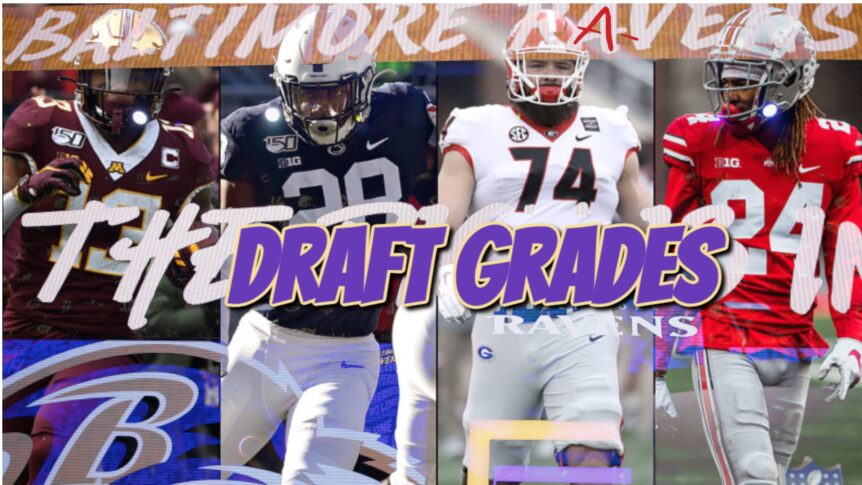 For all teams, the NFL Draft is a great chance to improve in some much-needed areas. For the Ravens, they had their fair share of needs after a rough offseason that saw the departures of Matthew Judon, Yannick Ngakoue, Willie Snead, and most recently, Orlando Brown Jr. Through compensation picks and a blockbuster trade, Eric DeCosta was able to accumulate nine draft picks for this year’s draft. So let’s get right into it and see what needs the Ravens decided to address and how they will reload for the upcoming NFL season. 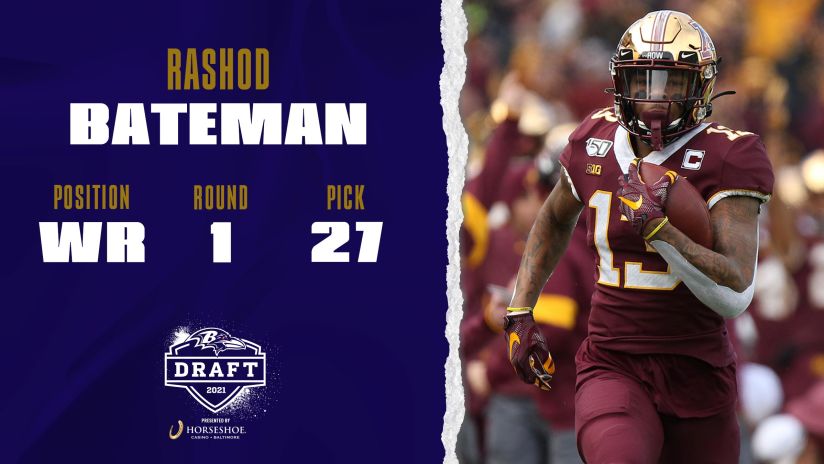 With their first selection, Baltimore addresses their most talked about need, that being a wide receiver. Not only did they get themselves a wide receiver, but they got one that can go up and get the ball, a massive need when you look at Baltimore’s wide receiver corps. This is a slam dunk pick in my opinion. Rashod Bateman ranked as WR #4 on my board, and Baltimore didn’t even have to trade up for him. Eric DeCosta and the Ravens come out swinging here and make a fantastic pick.
Grade: A+

The Ravens weren’t done yet on night one. With the pick they got from Kansas City in the Orlando Brown Jr. deal, they addressed the lack of pass rush in the locker room by selecting the pass rusher from Penn State formerly known as Jayson Oweh. Now wanting to go by his real first name, Odafe Oweh is probably the rawest pass rusher in this draft, but also has the highest ceiling. With his first step quickness and freakish athleticism, Oweh has all the intangibles to grow into one of the league’s best pass rushers. Yes, his production was very low coming out of college, but don’t let the zero sacks fool you. Oweh has shown some flashes where he’s able to get to the quarterback, he just needs to refine his technique. While I did believe that Azeez Ojulari was the best EDGE in this class, I can easily see why the Ravens made this selection. If Baltimore can get themselves a veteran pass rusher like Justin Houston to come in and mentor him, along with some much-needed coaching, the sky’s the limit for Oweh.
Grade: B

This is an overall very solid pick for the Ravens. The offensive line without Ronnie Stanley last year was horrendous, and the last straw came in the Divisional Round versus Buffalo, where Lamar Jackson got a concussion after a major lapse in the offensive line. Eric DeCosta and the Ravens’ front office knew this was a big need, and pounced on Ben Cleveland with their first pick of night two. Cleveland is a massive guard standing at 6’6 and weighing in at around 335 pounds. He is a terrific run blocker that mauls opposing defensive lineman, just what Baltimore needs. This pick also means that Bradley Bozeman will most likely make the switch to center, giving Lamar Jackson and the Ravens offense a very sturdy interior.
Grade: B+

Wow! The Ravens go off the board here and take Brandon Stephens. Stephens is an interesting pick here because he’s still very new to the position. He began his college career as a running back for the UCLA Bruins. However, after not getting as much attention as he had hoped for, Stephens tossed his name into the transfer portal, ultimately transferring to the SMU Mustangs. There, in 2019, he would make the switch to defensive back. As expected, Stephens is still very raw technical-wise. On the other hand, however, Stephens possesses an excellent blend of physicality at the catch point and athleticism. This is another developmental option here for Baltimore, but with his skills as a tackler, physicality, and athleticism, he should fit right into Wink Martindale’s defense if developed properly.
Grade: C- 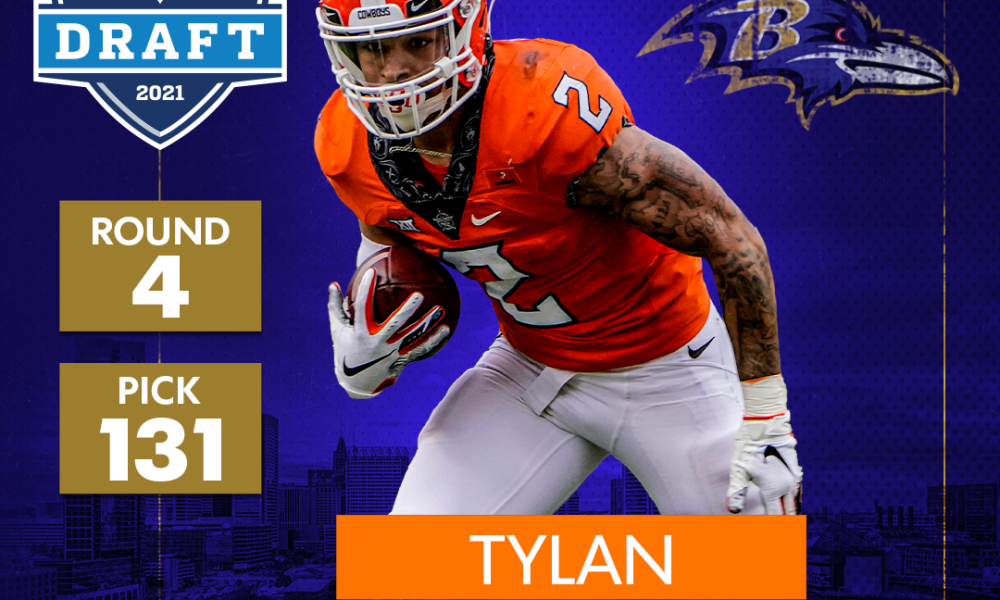 Bang! The Ravens start the final day of the draft off very strong, picking not only one of the best wide receivers left on the board, but also one of the best players in general. The big worry here for Wallace is injuries. Late in his junior season at Oklahoma State, Wallace suffered a torn ACL, and while he has had a full year of recovery, and had a healthy season in 2020, knee injuries are always something to keep an eye on. On the bright side, if Wallace can stay healthy, he has a very high upside. Throughout his career at Oklahoma State, Wallace showed consistent hands, aggressiveness at the catch point, and a good ability to separate. Although a day three pick, Wallace looks to immediately be a factor in Baltimore’s lackluster wide receiver room, that now, following the draft, looks to have the potential to be very solid this upcoming season.
Grade: A 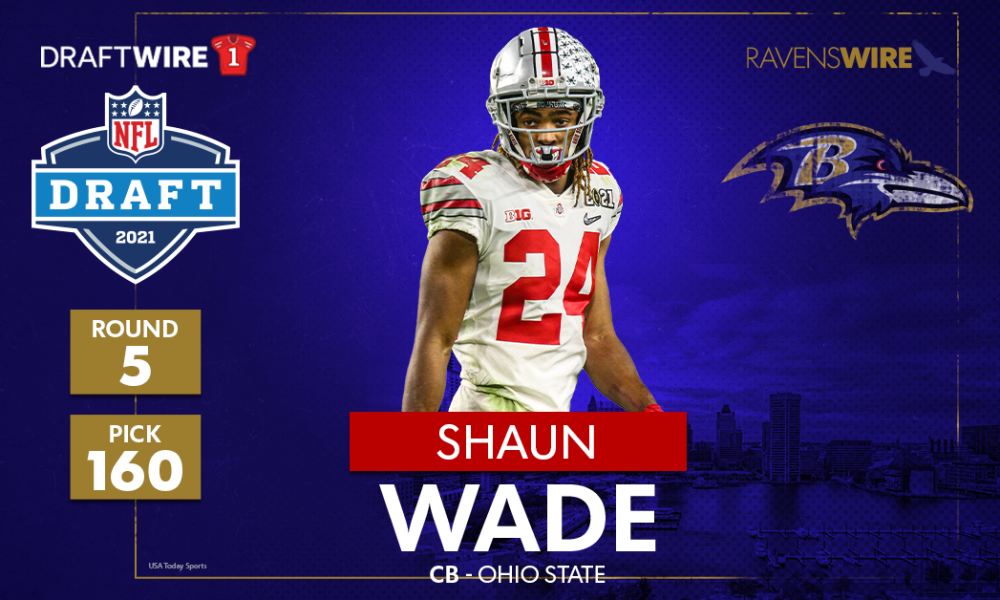 After trading back with the Arizona Cardinals, the Ravens move back to the 5th round and pick up another high-value player in Shaun Wade. Before last season, Wade was viewed as one of the better corners in this draft class. Things quickly changed though due to a poor 2020 season. You see, Wade played in the slot much of his career leading up to 2020, but with Damon Arnette and Jeff Okudah having now moved up to the NFL level, Wade took it upon himself to move to the outside. In hindsight, this was a poor move when it came to his draft stock. His stock plummeted, leading to him being available on day three. On the boundary, Wade never seemed comfortable and was picked at constantly. It seemed like he was playing with a huge target on his back. However, the Ravens made it known that they plan to use him as a slot corner and even safety at the NFL level, which is where Wade is most comfortable. With Tavon Young being unable to stay healthy, and the lack of safety depth, this is a low-risk high reward pick for Baltimore, as they continue to bolster their defensive back room.
Grade: B+

Now this is a pretty cool pick. It’s good value for Baltimore, but the fact Daelin Hayes gets to suit up for his favorite NFL team growing up is heartwarming. Hayes put up very good production, tallying 9 sacks and 20.5 tackles for loss, across his five seasons at Notre Dame. Hayes is an overall solid pass rusher that plays at around 6’3 and 260 pounds. On tape, he showed off pretty good technique with long arms, along with some quickness off the line of scrimmage. With the team losing both their starting pass rushers as mentioned earlier, Baltimore could have a guy to pair with Odafe Oweh off the edge, both learning under the veteran Pernell McPhee. With their second 5th round selection, Baltimore brings in a more pass rush, drafting a guy that could come in and play right away.
Grade: B

This is probably one of the weirdest picks in the draft. So weird, that I don’t even know how to grade it. Although the Ravens already have the beast that is Patrick Ricard, Ben Mason hears his name called here at pick 184, and the Ravens add another fullback to their team, who can also line up at tight end. Mason has all the things you want in a fullback and then some. He’s very tough, has great athleticism for the position, a good blocker, and a try-hard on the field. If he were to line up at tight end, Mason possesses excellent hands, so there’s not much of a worry there. With Baltimore’s run-heavy offense, I can’t say I hate the pick, but it’s a bit weird that they opt for a fullback over a position such as offensive tackle. Ultimately, I don’t hate the pick, but I don’t love it. I just wish Eric DeCosta and the Ravens’ front office attacked a different position of need.
Grade: C 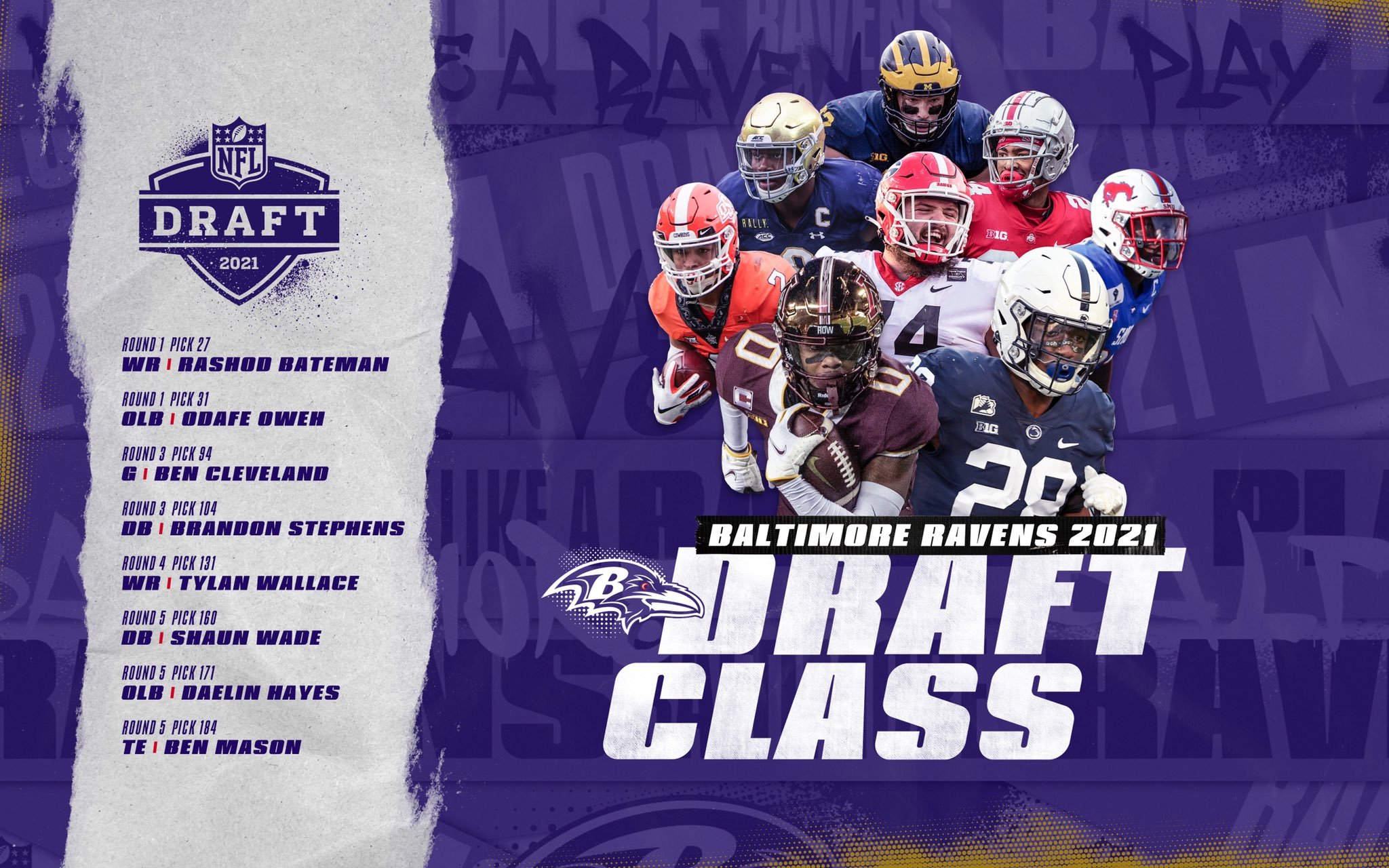 All in all, the Ravens have done well in the draft, yet again. They attacked positions of need early, got some nice developmental pieces, and may have gotten themselves a gem or two in the back end of the draft. Following the draft, the Ravens depth chart looks a whole lot better, especially at wide receiver and on the edge. With all the talk this offseason being about finding Lamar Jackson some help, it’s clear DeCosta and the front office heard those cries, getting Lamar some help that can come in and play day one. As for the other side of the ball, they drafted themselves a couple of day one-pieces, but also focused on the developmental and depth aspect on the defensive side, being that most of their defense was already filled out. Overall, the Ravens found a nice balance between offense and defense in this draft, selecting four offensive players and four defensive players.
Overall Grade: B+