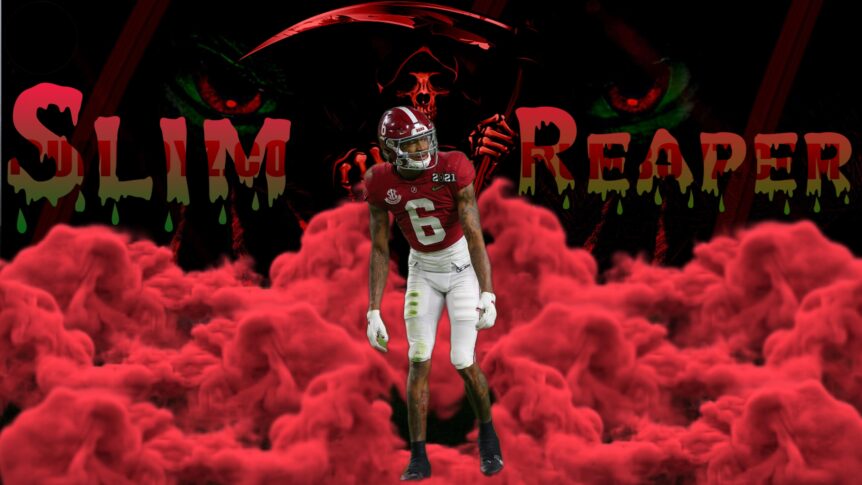 They call him the Slim Reaper. A nickname once bestowed upon NBA superstar, Kevin Durant. The cantankerous Durant eschewed the moniker, leaving it available in the sports ethos to latch onto another horizontally-challenged assassin. The icy-veined marksman, whose stature was etched in folklore with a championship-winning dagger in overtime, was none other than the more-slighted-than-slight receiver from the University of Alabama, Devonta Smith. Smith’s walk-off score in the 2018 Natty came when he was a true freshman, with barely an ounce of weight built on top of his high school frame. Over the next three seasons, Smith would add more weapons under his cloak, sharpen his scythe, and remind defenders and detractors alike that you can’t damage what you can’t touch.

DeVonta Smith could very easily have declared for the NFL Draft after his junior season, after he posted a remarkable 68/1256/14 line in 2019, while competing for targets with NFL first round picks Henry Ruggs and Jerry Jeudy. Instead, Smith opted to stay with ‘Bama for his senior season with Mac Jones returning as quarterback after replacing Tua Tagavailoa following his hip injury. Ironically, the Heisman favorite receiver from the Tide was actually Jaylen Waddle, until he fractured his ankle early in the season. This catapulted Smith into a role that can only be described as pivotal to that passing attack. Talented underclassman John Metchie III occupied the opposite side, combined with the dynamic exploits of stud running back Najee Harris, but Devonta Smith went so far as to completely rewrite the record books for the wide receiver position on his way to winning the Heisman Trophy. Offensive Coordinator, Steve Sarkisian implemented a myriad of ways to get Smith the ball in 2020, and the Reaper was lethal. The 117/1856/23 line was absolutely staggering, but what was seen on tape was another indication that Devonta Smith would develop into an enticing professional prospect. 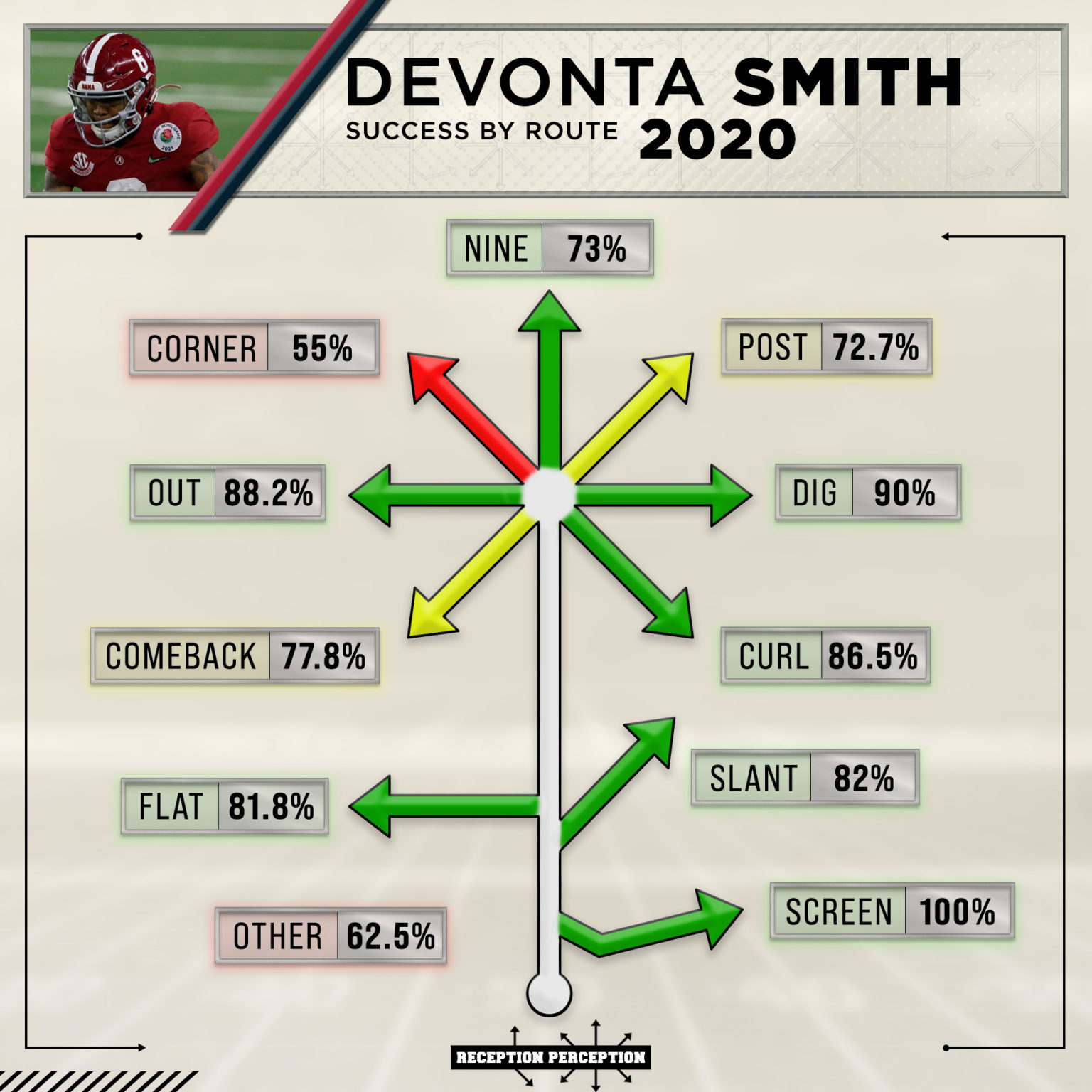 According to ReceptionPerception.com, Devonta Smith was successful against man coverage 78.2 percent of the time, good enough to be in the 90th percentile among players profiled. Against press coverage, the results were strikingly similar.

Simply put, Smith’s frame did not hinder him at all in the rugged Southeastern Conference. He is nimble, agile, intelligent, and explosive. He is a breed of receiver prospect that has not yet been seen in the league in exactitude. Comparisons to Calvin Ridley, Chad Johnson, and Tyler Lockett are fair, but not precise enough to give due credit to Smith’s potential career trajectory as the first round pick of the Philadelphia Eagles.

The regime change in Philly makes for plenty of intriguing storylines in 2021. The toxicity and ineptitude of Doug Pederson and Carson Wentz were jettisoned in favor of new head coach Nick Sirianni, former Chargers offensive coordinator Shane Steichen, and young dual-threat quarterback Jalen Hurts. Notable returning offensive starters are Hurts, running back Miles Sanders, second year speedy receiver Jalen Reagor, and reliable tight end Dallas Goedert. The Eagles also drafted talented running back Kenneth Gainwell from the University of Memphis. The Chargers connection with Steichen allows one to draw parallels to the potent attack we saw from Justin Herbert, Austin Ekeler, and Keenan Allen in 2020, with Devonta Smith assuming the Allen role as the elite route runner. Smith also possesses explosive capabilities after the catch that Allen lacks, giving plenty of reason for one to expect an immediate impact from the rookie.

In conclusion, Devonta Smith is a rookie receiver prospect with a very safe floor and meteoric upside. His skillset has been tailored to his frame and it won’t take long for the BMI argument to fade away into irrelevance. It is quite possible that the Eagles offense could be immediately more potent with the addition of the Slim Reaper, with years of improvement on the horizon. He is a truly special talent and the epitome of a professional receiver, despite not yet logging a single professional snap.