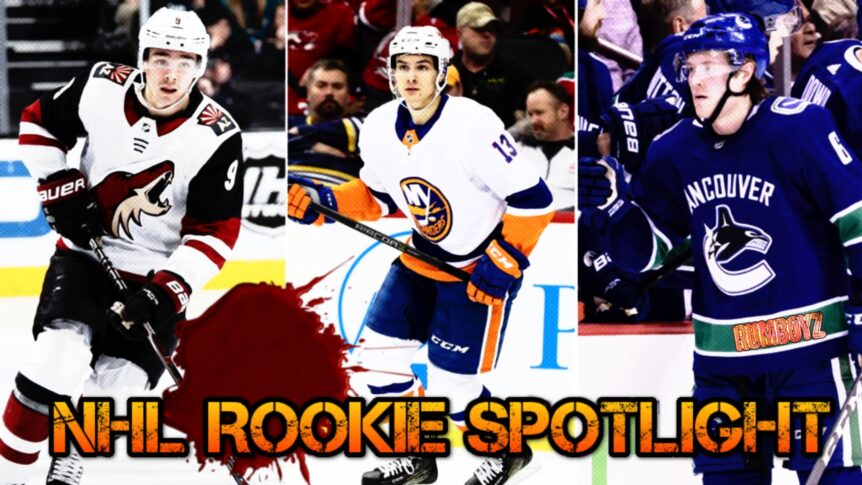 Generally, for the Calder rookie race, it mainly comes down to who has the most points. An exception would be a goaltender playing up to level or the well-paced defensemen. We are one month into the season and this is where the race starts to heat up.

After spending a couple of seasons in the KHL, the 23-year-old Russian phenom Krill Kaprisov made the jump into the NHL. Playing on the top-line and 1st power-play unit benefited his game over the offensive zone. He showed great chemistry with his linemates, whether it was Marcus Johansson or Joel Erickson Ek, Nick Bjugstad, Zach Praise, or Jordan Greenway. Immense stickhandling shifty hands get through defenders has a great finishing touch on the strong forehand 1 -on-1 against the opposing goalie. Elite hockey IQ breaks down plays, knows where to be at the right time finds passes to teammates reads perfect game recognition playmaking vision. Makes an excellent playmaker finds the thread does have patience when needed. This is the dynamic forward the Wild needed with highlight-reel upside.

Ty Smith became New Jersey’s vital puck-moving defensemen smart sense for the game could log big minutes playing major top-4 ice time. Offensively the Devils’ best scoring defensemen, without a doubt great instincts for the game. Pretty smart when having the possession looking for lanes to open. He possesses solid hand-eye coordination moving the puck away from defenders while being pressured. Excellent skating ability the quick strides make him elusive when changing direction and accelerating. He puts up the points as he is currently the scoring top-scoring rookie defensemen in all should be #1 in points per game counting in sample size. Defensively he is decent at most. He does have some aggressiveness when poke checking but needs more work done on his end. Now pairing him with a defensive defensemen Damon Severson helps instead of Matt Tennyson.

Josh Norris posses 1st line center potential and is an overall absolute stud with high offensive capability. His strong shot release gets the puck off easily as he aims towards the target. Despite the smaller frame, he doesn’t lack a net-front game and is always going for rebounds or tipping shots. Norris is a good enough playmaker making the right reads and isn’t afraid to contest board battles. Team leading shooting categories xGoals, Flurry xGoals, Shooting % on shot attempts. He gets it going when on the power play and likes to position at the flank then moves in the low slot. On the defensive side of the ice goes after all the blocks, hits, and takeaways, plus he knows coverage assignments. The Senator needs more players that are responsible for both ends of the ice and Norris fits the 2-way center mold.

Pius Sutter emerges as a great goalscorer on the Chicago Blackhawks who also managed to record the first-ever career hat trick this season out of Switzerland. On the rush he knows where to be at positioning himself to receive passes near the crease, putting the puck in the back of the net. He moves through transition nicely and has awareness breaking down how plays all develop. Strong, snapshot mobile hands to move from forehand to backhand. He has the responsibilities like a center-winning faceoffs and offensive flair as a winger. Playing top line winged by Patrick Kane and Alex DeBrincat seems to be the perfect fit. He’s a superb teammate and there is chemistry on this line as all 3 display quality puck movement, making quick seam passes. Chicago’s man-advantage game is hugely underrated and Sutter does well on both units.

Tim Stützle is always known for his explosive speed skating to pass anybody collapsing the defense. With balanced puck control he moves through the zone seeing gaps in coverage making defenders miss. He has the ability to switch between 2 positions, commonly playing the wing. Stützle’s favorite shot comes in the wrist shoots the puck sends high velocity when aiming for one-timers sets the hand-eye coordination up. Elite shot capability sends it out quickly with an additional play driving skillset. Found a smooth connection between Drake Batherson both ice looked up to par together. Passing-wise gets over the neutral zone smart enough player delivers passes smoothly. The glaring hole would be the defense would say it isn’t that bad what numbers would say.

Nils Höglander is extremely talented. He’s featured on the Canucks’ 2-way second line with Tanner Pearson and Bo Harvat. This line boosters huge offense. He finds scoring chances, is creative at making opportunities towards linemates, and is a net-front presence. Capability to set up passes viable playmaking vision. Showcases heart and determination night in and night out he brings the grit tenacity. Even if only at 5’9″, 185 pounds his small size doesn’t keep him from challenging puck battles near the boards and he uses physicality when needed. Amazing forechecker, he gets recoveries after the dump and in puck category he ranks near the top. He has a major impact on his team offense or defense consistently. May not record the points, despite that, you know he’s always part of the equation.

What makes Philipp Kurashev’s production a bit more impressive is that he is not even getting playing time, averaging only under 15 minutes. Still, he findings ways to be involved in the offensive zone attack more. Huge props to the head coach Jeremy Colliton for getting the best out of players. When running the breakaway after the steal he works the best 2- on-1 /3-on-2, dishing the pass or receiving the pass aiming a goal. Nifty hands, sharp at handling the stick, and shakes off the forward pressure. He has great eyes out the passing windows to teammates, plys manipulates and breaks down the defense with a highly-minded vision. Kurashev just like Suter is another fantastic Swiss scorer. Marksmanship shot taker and also likes to stay in front of the net as a heavy rebounder. Effective shooter in every scenario including 5v5, even strength, or power play.

Calvin Peterson is the future LA Kings goaltender taken over Jonathan Quick’s starting job. He does well on unblocked shots and recovers the rebound.

If you didn’t know already the Blackhawks roster 3 outstanding rookies besides Kevin Lankinen’s extraordinary talent. Having a Jordan Binnington rookie type season I can see him earning Calder recognition. He reads his blocker well and has a great glove catch to compliment that too.