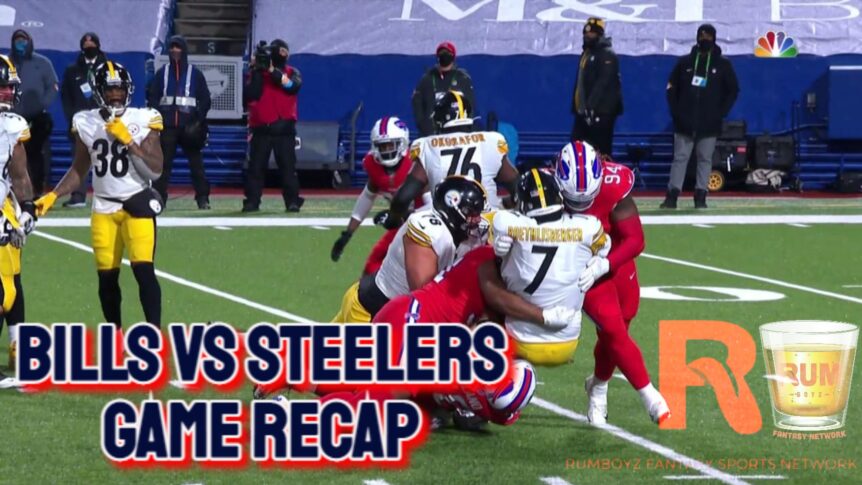 The story of the early goings of this game was punt, punt, and punt again. Great defensive efforts from both teams, as well as some dropped passes (hint, hint, nudge, nudge, Diontae Johnson and Eric Ebron).

The Steelers were finally able to put points up on the board in the second quarter, taking advantage of the short field after a fumble recovery (or interception?) from Cam Sutton, with Big Ben hitting James Washington over the middle for a 19-yard touchdown.

After trading a couple more three-and-outs, Buffalo’s offense started to find their groove. A couple of short plays, as well as a 23-yard catch and run from Stefon Diggs and a crucial roughing the passer call on Henry Mondeaux set the Bills up in the redzone that ended in a 34-yard field goal from Tyler Bass.

The Steelers got a chance to run a 2-minute offense, but a short throw from Big Ben ended in a 51-yard pick-six from Taron Johnson, which seemed like the moment where scales tipped into the Bills’ favor and began the downfall of the Steelers in this game.

The Bill’s received the ball coming into the second half and came out shooting. An 8-play, 68-yard drive capped by a 19-yard touchdown from Stefon Diggs allowed the Bills to extend their lead. The Steelers quickly went three-and-out on their next drive and punted back to Buffalo. Stefon Diggs continued to dominate the Steelers defense, with back-to-back targets that resulted in 22 and 19-yard gains respectively. 2 plays after that, Josh Allen hit rookie Gabriel Davis in the back corner of the end zone for a 13-yard touchdown.

After that, there was (can you guess it?) more punts. On the Steelers’ next drive after, Ben Roethlisberger completed passes to multiple receivers including Diontae Johnson, Eric Ebron (don’t worry, I was surprised by those as well), James Washington, Jaylen Samuels, and JuJu Smith-Schuster. After a penalty on Tremaine Edmunds, setting up the Steelers on the 3-yard line, JuJu caught a quick touchdown pass to shorten their deficit.

Buffalo then responded with another scoring drive. After some short plays, and then a 35-yard pass interference call on Mike Hilton, the Bills found themselves with a 1st and goal from the 1-yard line. Pittsburgh made a strong stand and held the Bills to another field goal.

With about 8 minutes left on the clock, and facing a 2-possession deficit, the Steelers found themselves in a position where they could still pull out a win. But a long shot down the right sideline was picked off by cornerback Levi Wallace, and the game was over. Buffalo took over possession, got a few first downs, and ran out the clock. Final score: Buffalo Bills, 26, Pittsburgh Steelers, 15. 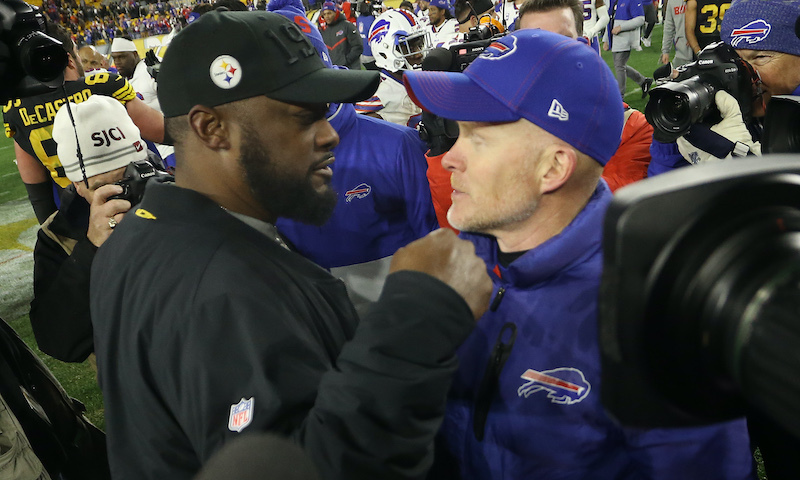 Mike Hilton: Once again, Mike Hilton was a bright spot in an otherwise dark and depressing defense. Apart from a killer PI penalty, he balled out, plain and simple.

Cameron Heyward: Absolute BEAST. Despite having low sack numbers on the season, people are starting to take note of the veteran. The Bills were forced to double him due to the amount of pressure he was bringing. There’s nothing else to say other than the fact that he’s a hell of a disruptor and brings great effort each snap he plays.

Cam Sutton: Another injury replacement, what’s new?  Stepped in huge with the absence of Joe Haden and made some desperately needed splash plays all game.

Marcus Allen: He showed good speed off the edge and stepped in nicely. Looked uncomfortable at times but was playing aggressively the whole game.

Kevin Dotson: Definitely solid in the limited snaps he played. Let’s hope both he and Matt Feiler can heal up quickly and are ready to go for the playoffs.

Ben Roethlisberger: This may or may not be true, but to me, it seems like Ben’s lower body mechanics have been completely messed up, and it seems like a problem with his knee. Toes pointing the wrong way is what popped out the most to me. This caused short throws, which was evident on the pick-6 before the half. Another thing I noticed was that Ben wasn’t stepping into passes. Overall, it seems like his knee is messing with his play, but as I said, this is purely speculation and deserves a deeper dive before anything is confirmed.

Diontae Johnson: Diontae Johnson has shown time and time again that he can be the #1 guy in the Pittsburgh receiving core. He’s a good route runner, and absolutely electric WHEN he catches the ball. He has yet to show the consistency required to be a great receiver in this league, and it’s been pretty frustrating. 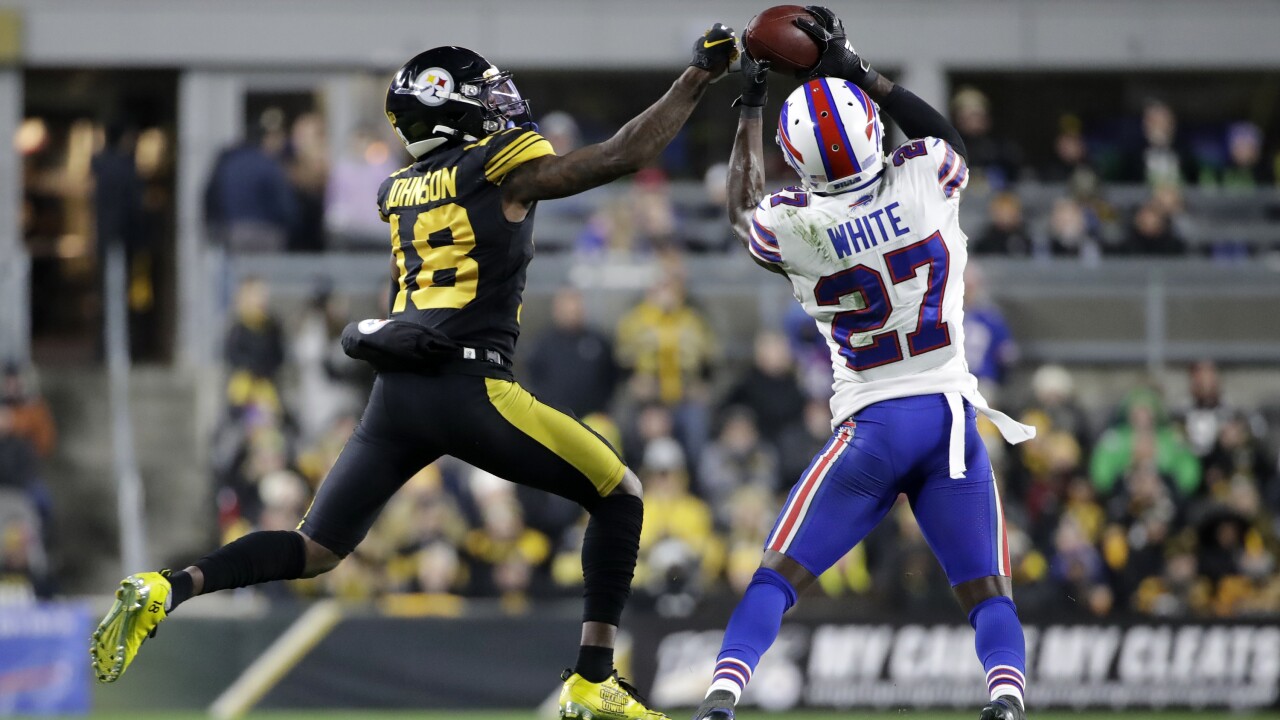 Injuries: I hate to be the person looking for excuses coming off an L. But missing Joe Haden, Robert Spillane, Vince Williams, and half of our O-Line were huge this game.

Contain the Edge: It seemed like Josh Allen had the freedom to wander left or right and complete whatever he wanted nearly every play. It was vital for the defense to set the edge, force Allen to step up, and get good pressure and QB hits, but it just didn’t happen.

Pass rush: Getting pressure from the edge wasn’t the only problem. It seemed like the Steelers were sending the house every play but didn’t end up with much to show for it.

Ray-Ray McCloud: I start biting my fingernails anytime McCloud is back deep for a punt return. It seems like he struggles with figuring out when to call for a fair catch. Also, don’t even get me started on that hurdle attempt.