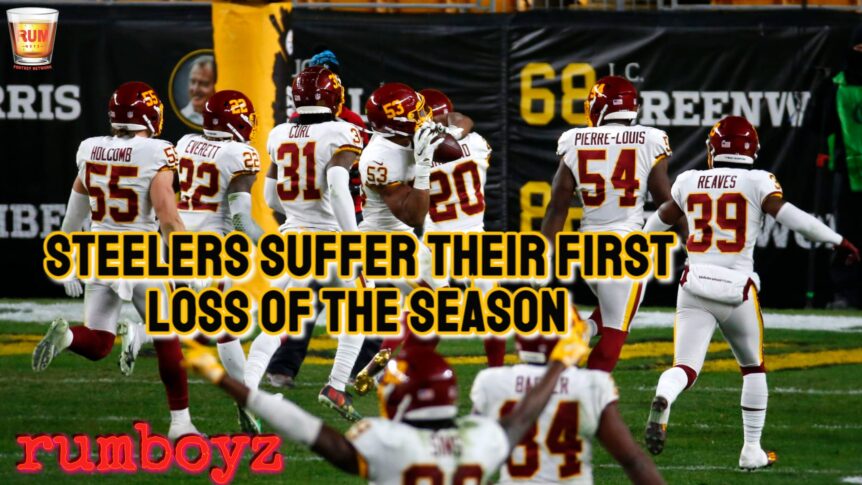 The Steelers’ undefeated streak has come to an end, falling to the Washington Football Team 23-17 at Heinz Field. The game started with great defense from both teams, with the first quarter ending 0-0. The Steelers were able to come away with a touchdown with 10:47 left in the second following a 14-play, 72-yard drive led by Ben Roethlisberger, capped by a 3-yard touchdown pass to Diontae Johnson. This was followed by more great defensive efforts from both teams, with the Steelers stopping a 4th and 1 chance by Washington. The Football Team’s defense then responded with a commanding goal-line stand after a seven-play series by the Steelers inside the 5-yard line. The Steelers forced Washington to punt after a three-and-out on their next possession, and RayRay McCloud (or McDonald?), ran back the punt for a 17-yard return, starting the Steelers’ drive at the 50-yard line. James Washington caught a short pass in the flat and broke tackle efforts from Kendall Fuller and Deshazor Everett, taking the ball in for another Steelers’ touchdown, giving Pittsburgh a 14-0 lead with 3:54 left in the first half. Poor tackling efforts from the Steelers defense and incredibly confusing calls by the officials allowed Washington to attempt a 49-yard field goal and cut the Steelers’ lead to 13, with a score of 14-3 going into halftime.

Coming into the second half, Washington was able to close the gap and score their first touchdown of the game. A 14-play, 82-yard drive was ended by a 1-yard Peyton Barber touchdown run. Washington converted 2 3rd down plays during the drive, a 31-yard catch and run to Cam Sims, and a 9-yard pass to Steven Sims. A long completion to Logan Thomas set Washington at the 1-yard line. The Steelers’ defense was able to hold them until 4th and goal, but a defensive holding call on TJ Watt gave Washington a fresh set of downs, which they were able to convert on. An ugly drive by the Steelers followed, including dropped passes, bad run blocking, and a botched snap, which forced the Steelers to bring Jordan Berry out once again to punt it away. Another good effort by the Steelers’ defense got the ball back to their offense, however, they disappointed yet again, a common theme in this game. Dropped passes and penalties forced them to settle for a 37-yard field goal by Matthew Wright, the replacement for Chris Boswell, who was inactive on Monday due to a hip injury. Soon after, the Washington offense started to show their strengths, when they tied the game at 17-17 with 9:09 remaining in the 4th after a 53-yard drive ending in a 15-yard touchdown pass to Logan Thomas. The Steelers lost cornerback Joe Haden during the possession. Lacking key pieces such as Steven Nelson and Robert Spillane, the defense was looking like a shadow of their former self. A 45-yard field goal by Dustin Hopkins with 2:04 left in the 4th in the ensuing drive gave Washington their first lead of the game, a drive that was energized by a huge one-handed catch from Cam Sims to convert a 3rd-and-4. The Steelers’ drive was a brief one, with Ben Roethlisberger’s first pass attempt being batted into the air by Montez Sweat and intercepted by Jon Bostic. This set up another Dustin Hopkins field goal in the last seconds to seal the Washington win with a final score of 23-17.