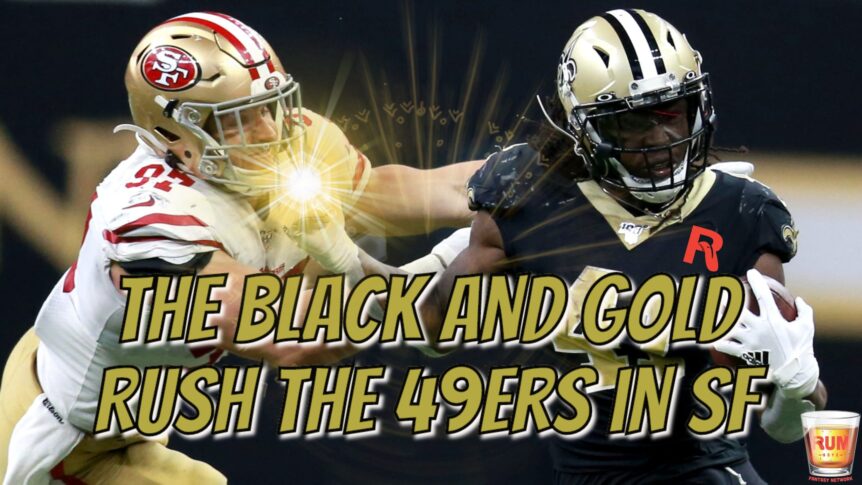 The Big Easy has a gold rush as the Saints take down the Niners’:

When I recall the 2019 season and the unbelievable game between the Saints and 49ers, the insane back and forth between these two offenses comes to the forefront of my memories. Then, I remember how the Saints barely lost to the Niners’ 48-46 with a last second field goal. It was a heart breaking loss, and it was at a time my amazing wife and I were on vacation. So, you can imagine when I pulled the curtain back in our room to see the clear waters and white sand that it was bittersweet.

When The Saints lose, it’s a soul crushing event for me. However, this season, it hasn’t been very crushing, with the Saints defeating the 49ers 27-13 taking The Big Easy football team to a record of 7-2, landing them atop the NFC South. That being said, the victory was bittersweet, there’s that word again…. QB Drew Brees was taken out by DE Kentavius Street with a rib shattering sack, I’ve recently learned that Brees will miss some time due to a rib contusion, so it wasn’t exactly shattered, but I digress.

The game started with the 49ers coming out firing. QB Nick Mullens was spreading the ball around like a multi-year vet. Coach Kyle Shannahan understands that in order to beat the Saints, he needs to keep their offense off the field, and Mullens did a great job doing that….. at first. After keeping the Saints offense sidelined for half of the first quarter, Mullens hits rookie WR Brandon Aiyuk for a 10 yard touchdown pass. Aiyuk has become an impressive young player, and has a bright future in the league. The Saints had their full gamut of receivers, including the number one ranked receiver in 2019 Michael Thomas. 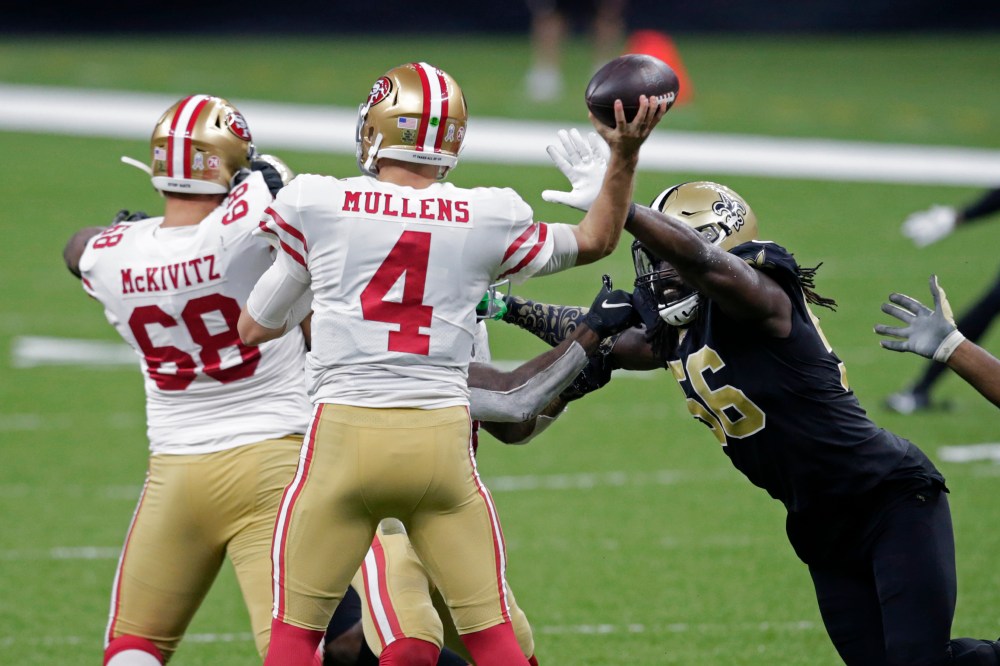 However, Thomas was rather quiet this game, missing a few passes that seemed to be no fault of his own since they were over thrown. One of those over thrown passes came in a 3rd and 2, causing the Saints to punt. The Saints defense showed up in a lot of big ways against the 49ers. However, the special teams had a hard time actually flubbing a punt reception twice with one going back to the Niners’. The Niners were able to capitalize on the bobbled punt with a field goal at the beginning of the second quarter taking the score to 10-0. Deonte Harris, special teams stud for the Saints must have used the most punt as motivation, because after he received the kick off from the Niners scoring, he took the ball 75 yards to get into the Niners’ territory. The Saints couldn’t seem to get anything going on offense so they had to settle for their first points being from a 49 yards Wil Lutz field goal. The Niners were still ahead 10-3.

The Saints just couldn’t seem to get their offense clicking, until another flubbed punt reception occurred, this time on the 49ers. WR turned DB Marquez Callaway was there to grab a ball that bounced off CB Ken Webster, giving the ball back to the Saints in great field position once again. Then, RB Alvin Kamara started doing Kamara things. Taking a pitch from Brees and rushing in from 10 yards for the touchdown after hurdling over CB Jason Verrett. The Saints tie it up 10-10. After the Niners tried their hand at offense, the Saints took the ball back and Kamara started putting on a clinic. In two plays #41 gained 48 yards off passes from Brees. The Saints were marching! And, it only seemed fitting that Kamara be the one to get the touchdown since he was the main reason they made it to the end zone. The Saints were now in the lead 17-10 with 1:15 to go in the first half.

Then the worst thing to see as a fan of an NFL team happens…. Drew Brees is taken out of the game after a huge sack by the 49ers. It was later learned that he is suffering from a rib contusion and will miss some time. So, we turn to our backups, Jameis Winston and Taysom Hill. The Saints looked ok, with Winston starting off throwing a pass to Kamara for a gain of 16 yards. To be honest, the rest of the QB play was a blur. Winston did the best he could with being out of the spot light for as long as he had, and Hill didn’t throw the ball anytime he touched it. The Saints fan base love Hill, and he ability to run, but we need to see him throw! He has thrown the ball only 18 times in his NFL career, so before this Saints fan can say he wants to see him take over, he need to see more. 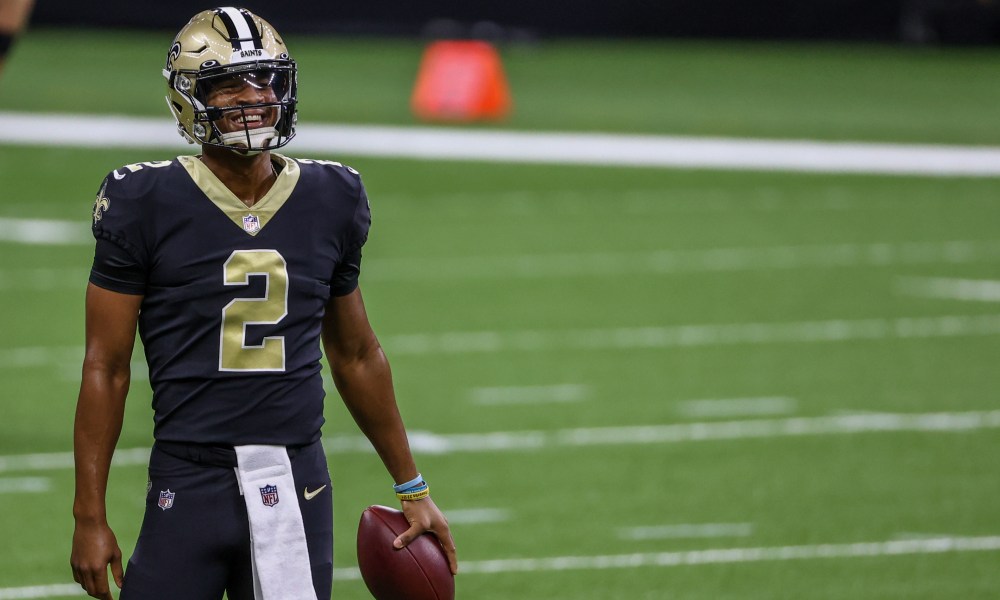 The Saints defense are a close second for “player of the game” to Alvin Kamara. The Saints defense had 2 sacks, 2 interceptions, and 2 recovered fumbles. One of those interceptions was by veteran DB Malcom Jenkins as Mullens tried a quick pass down the middle of the field and Jenkins took it out of the air like a frog snatching a fly! After some back and forth between offenses, some life seemed to spark in Winston as he was completing passes to Kamara to March down the field. At the end of the drive Winston went for a touchdown with Mike Thomas, but over shot the receiver by a mile. It was becoming obvious that some of the receivers were getting frustrated. Wil Luts made a 23 yard field goal to take the Saints’ lead up 20-10.

The football Gods must have favored the Saints, because there was yet another fumbled punt reception by WR Richie James that was recovers again by Marquez Callaway. That recovery set up the Saints for Kamara’s third touchdown of the game, taking the score to 27-10. This was all but over for the Niners, and the Saints just kept their foot on their opponents throats. The Niners just couldn’t seem to get any offense working for them ending their drive with a 40 yard Robbie Gould field goal. The Niners’ defense however were not going to give up so easily. As stated before, whenever Taysom Hill is in the game, there is a very good chance he is going to run, not throw. So, on his second attempt, the Niners knew what to do and knocked the ball out of Hill’s hands getting the ball back, giving them a possibility to win this game.

Of course, The Saints defense were playing on all cylinders today ending the offensive drive of San Francisco with a S Patrick Robinson interception in the end zone on a pass intended for WR Kendrick Bourne, this clinching the Saints victory taking their record to 7-2. Here’s hoping that The Saints of New Orleans can keep this streak going, even without their veteran leader Drew Brees. The Saints are welcoming The Atlanta Falcons next, and we all know how great that rivalry is. The Falcons know exactly how to play the Saints, and that makes me a little nervous without our general behind center.