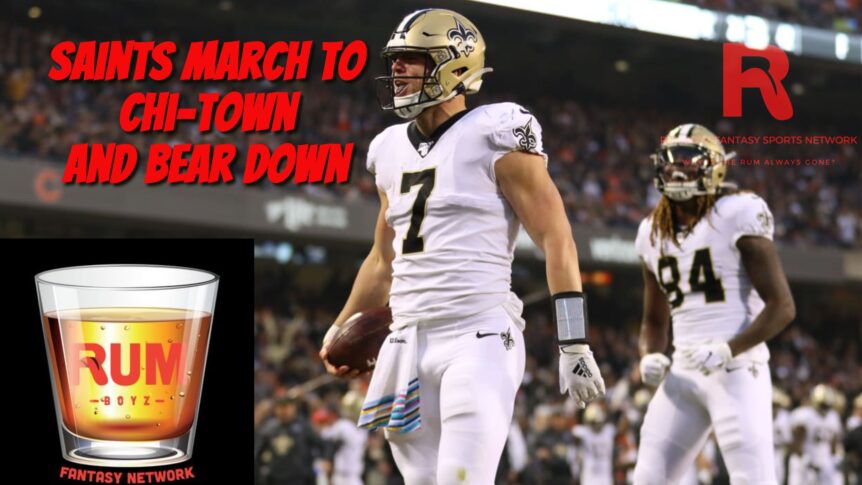 The Saints March into Chicago to Bear Down:

The Saints of New Orleans trek the cold Midwest to try and go 5-2 on the season. The Saints are still without their top receiver Michael Thomas, as well as Emmanuel Sanders out due to Covid-19. The start of the game has the Saints offense cruising down the field. RB’s Alvin Kamara and Latavius Murray are being used often to try and keep turnovers low due to the cold. Anyone who’s played football in cold weather understand the ball gets slick, and hard to grip. QB Drew Brees seems to be handling it as he takes his team down the field. QB2 Taysom

Hill is being used as well to help rush the ball, again, due to the cold.

It’s easy to see Head Coach Sean Payton is feeling the cold, bundled up on the sidelines, nose red from the cold and rubbing of his sleeves. The Bears held strong in the latter part of the drive and kept the Saints to a 38 yard Wil Lutz field goal, taking the count 3-0 Saints favor. The Bears, who are dead last in the NFL at running the football start off with completions to multiple receivers. As the Bears are trying to get to the end zone, you see QB Mitch Trunisky watching from the sidelines, and can’t help but feel that he could be a bit better at creating plays with his feet as Starting QB Nick Foles is not a runner. On a second down and 8, DE Marcus Davenport bowls through the Bears O-Line for a big sack on Foles at the 2 minute mark pushing the Bears back to 3rd and 20. After a short pass to WR Mooney, K Cairo Santos sinks a 44 yard field goal to take the score 3-3 before the end of the first quarter. With 10 seconds left in the first quarter, Brees hit Kamara for a 48 yard pass play taking the Saints even closer to the end zone. 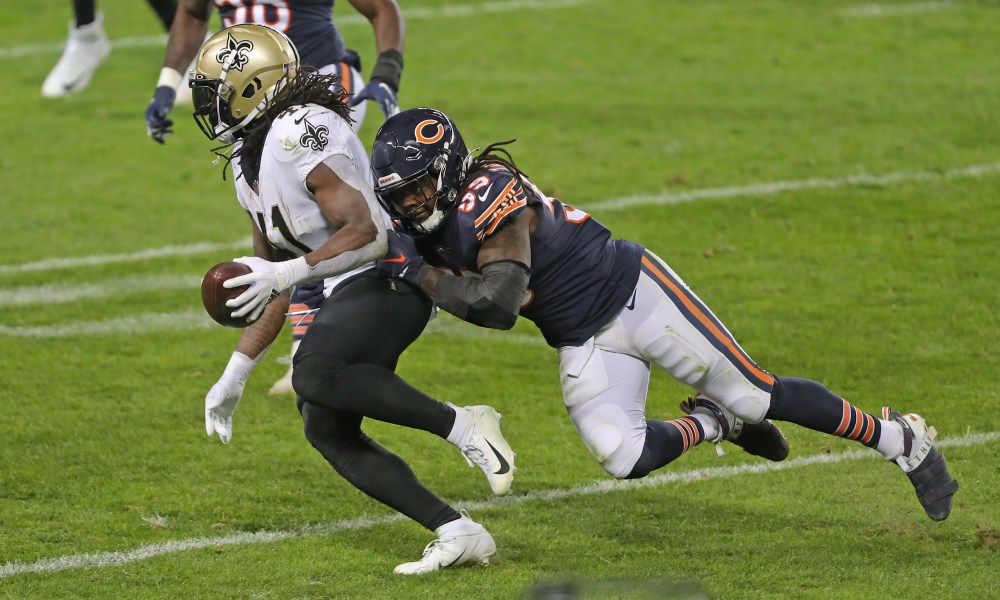 The second quarter starts up with a hand off the Latavius Murray who gets swallowed up by the Bears defense, then immediately completes another pass to Kamara for 15 yards. It’s obvious the Saints are feeling the cold on Soldier Field. The Saints marched to the RedZone where the Bears are known to shine. Chi-town’s football team showed why they are called the best redzone defense in the league by holding the Saints to a missed 27 yard field goal by Wil Lutz who had made 29 straight field goals prior to this bounce off the upright. Easy to see Sean Payton’s anger after the camera cues to him acting like Donald Duck after he stubs his toe!

Just as soon as you can say “Who Dat!” Foles hits rookie receiver Darnell Mooney for a fifty one yard bomb. Within only a few plays, the Bears were in the end zone, with a 24 yard touchdown pass to WR Allen Robinson taking the count to 10-3 Bears. The Saints offense take the field again to try and get the score evened out, however the Bears prove to be too tough for them and get the ball back fairly quick. Just as the Bears defense did before, the Saints did in kind and held the Bears to a 3 and out after former Saint TE Jimmy Graham couldn’t make the catch for the first down.

After a few short plays by the Bears, on a 3rd and 1, David Montgomery takes the ball for a 31 yard run, the longest rush on the Saints defense all season. 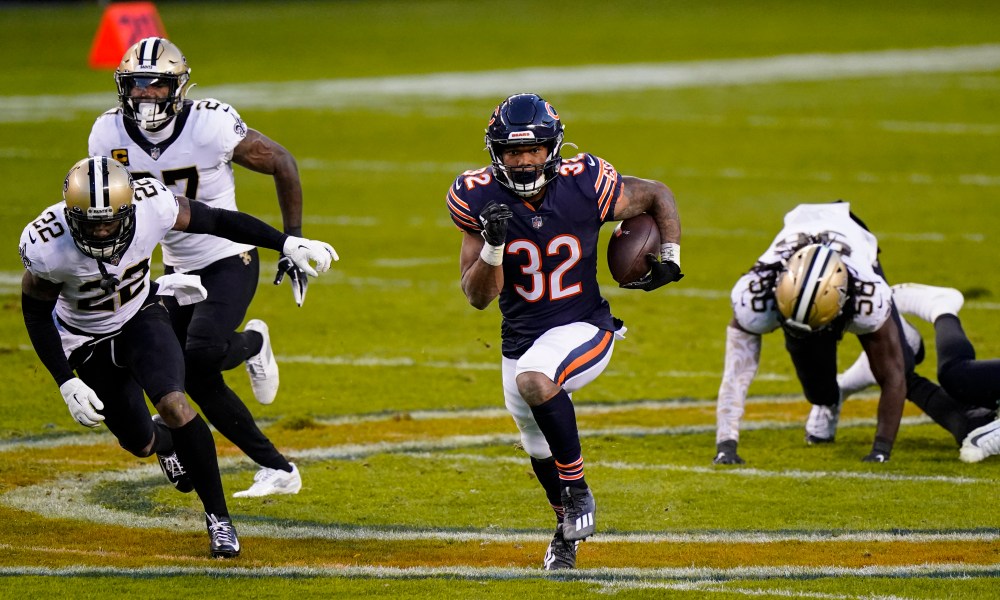 Almost the end of the second quarter, the Saints defense make a stand in the redzone, making Santos have to connect with a field goal to take the Bears to a 13-3 lead. The Bears defense is playing extremely well at this point, stopping Kamara at a 4th and 1, and of course, the Saints are going for it! Kamara takes a pitch from Brees to get the first down and then some. The Saints are trying to get into field goal range at this point before the half, and continue to get closer and closer thanks to Kamara. As if the Saints were touched by God himself, they get a flag called on the Bears Kyle Fuller for pass interference, putting the Saints within striking distance. Brees takes the snap, rears back and lets fly, hitting TE Jared Cook for the touchdown taking the score to 13-10 Bears right before the end of the first half.

The start of the second half has the Saints showing their defensive strengths, sacking Foles on 4th down to get the ball back, just after Foles gets flagged for delay of game. The Bears punt to Deonta Harris for a 48 yard return, taking the Saints to the 16 yard line! However, the Bears show why they’re known as one of the strongest defenses by holding the Saints to only a field goal, tying the count at 13-13 in the 3rd quarter. Almost immediately after getting the ball back into his possession, Foles throws an interception to S Marshon Lattimore, giving the Saints good field position to get their second lead of the game after converting on a 4th down to get Wil Lutz in position to make a 39 yard field goal to take the Saints to a 16-13 lead.

The Saints try their hand at converting yet another 4th down, but Kamara is met behind the line of scrimmage by a barrage of Bears to get the ball back in their hands. After a quick three and out by the Bears, the Saints have the ball back in the 4th quarter. After the 10 minute mark, Brees hits backup QB Taysom Hill for a slant pass to the end zone bringing the score to 23-13. Now, I know this is a column to recap the game, but I have been awarded a few liberties with my writing, and I need to say something about Taysom Hill.

Hill, the BYU product that had a spattered college career, is an amazing athlete! And as a Saints fan, I love having the Swiss Army Knife on our team, however, it comes with some fear for our future as a team. Hill is an athlete first, quarterback second, and it shows. He has hardly thrown a pass in the NFL, however he has been able to make many, many plays to take the Saints to victory. I just don’t see him being the future behind center, and it is bittersweet because we will lose him to another team willing to get him more snaps as a QB, but we will also have the heir apparent to Drew Brees’ throne in either Famous Jamies Winston, or someone they draft. We will see how it all shakes out very soon.

Foles carries his team down the field with a number of completed passes to multiple receivers, RB David Montgomery, for Saint TE Jimmy Graham, and the Bears rookie WR Darnell Mooney, who was the recipient of the touchdown a the end of that drive taking the score to 23-20 Saints lead. 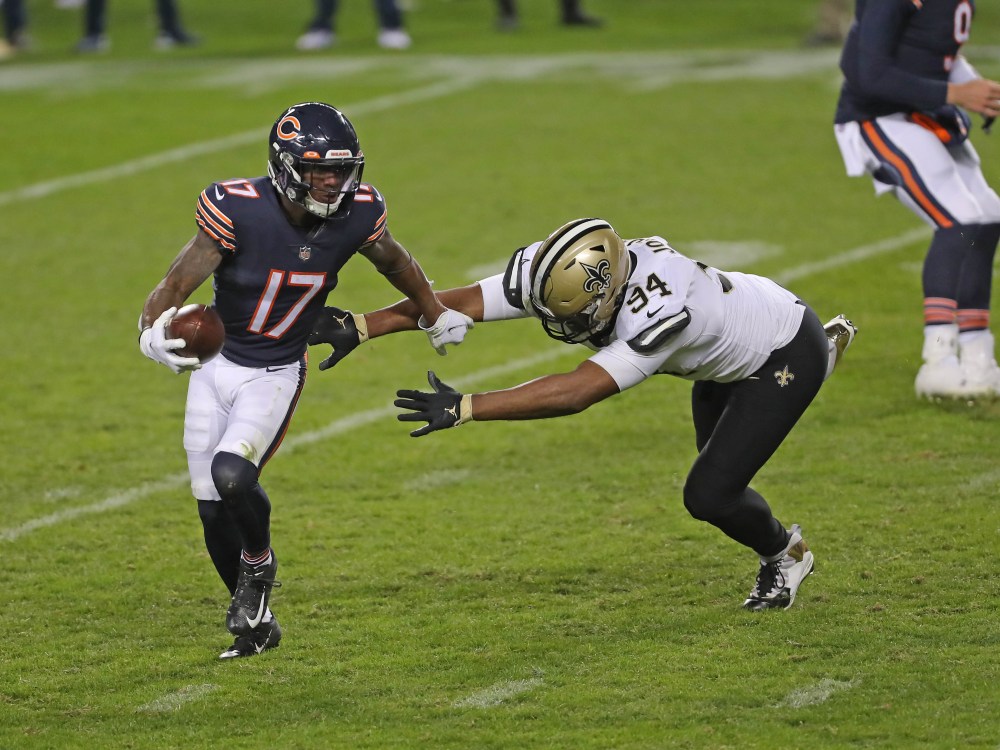 The Saints turn over on downs and the Bears move down the field as time runs down in the 4th quarter. The Saints hold the Bears to a 51 yard field goal, and we’re going into over time!

Overtime is under way and S Malcom Jenkins heads to midfield to make the call on the coin toss. Jenkins states “I decided to be a rebel and do something different and call Tails, because I usually always call heads.” Well, it worked out for the veteran as it lands tails, and the Saints have control of the ball first. Of course no one just expected The Bears to just hand over a win, and they showed just that, stopping the Saints on downs and getting the ball back. The Saints defense were up to the challenger however, with a big time sack from DT David Onyemata putting Foles and his offense at 3rd and 15. Even after gaining a first down due to a great diving catch by WR Allen Robinson, Foles gets swallowed up on the very next series giving the ball back to New Orleans.

All the Saints need is to get within Field goal distance to take the win. After some passes caught by TreQuon Smith, and some shifty running by Kamara, Wil Lutz was set up for a 35 yard field goal. The ball is snapped, laces out, and the kick is up. It’s good!! 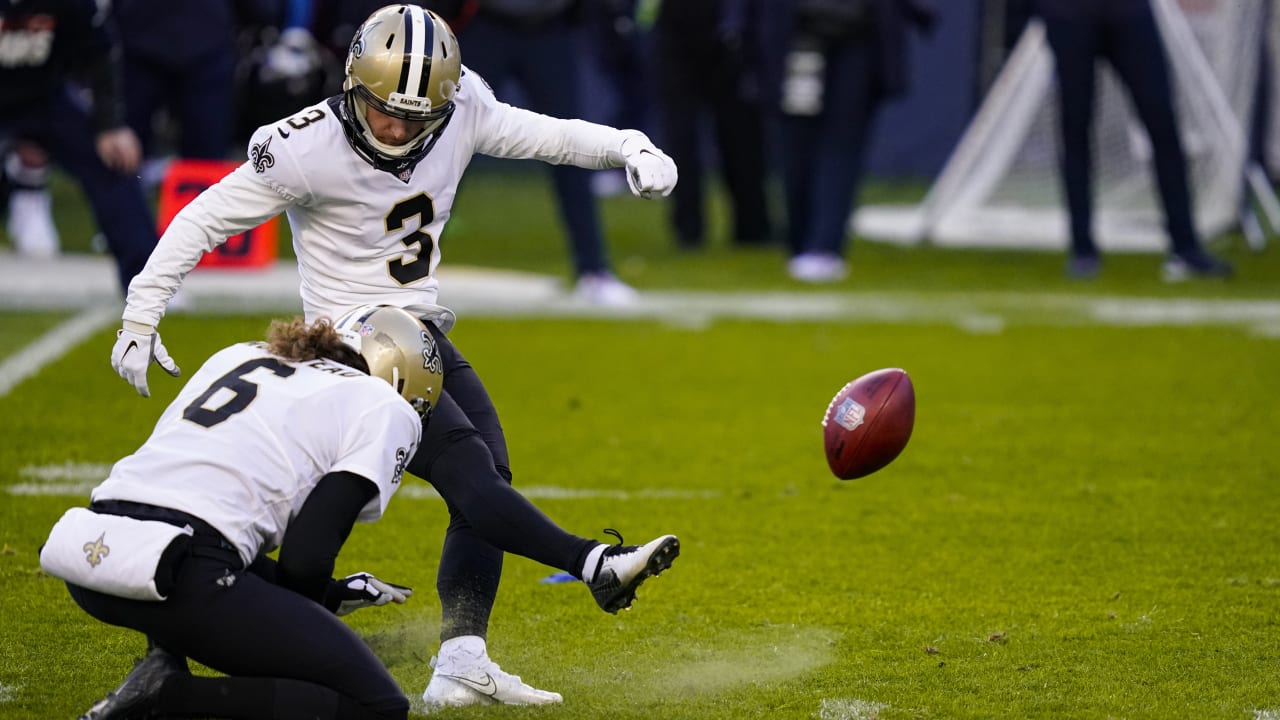 The Saints win a close contest with the Chicago Bears and they take their record to 5-2, edging out the Tampa Bay Buccaneers for top seed due to win streak. The Saints have won 4 in a row, and look to continue that streak when they March in to Tampa and face the Bucs on November 8.

of The Fantasy Football Plug Podcast