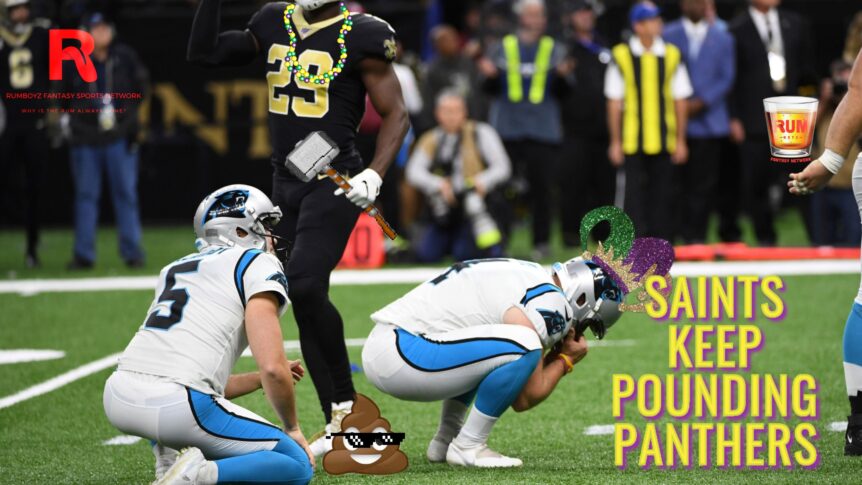 The Saints keep pounding the Panthers

Written by
Jay the Plug of The Fantasy Football Plug Podcast

It was a welcome home for Teddy Bridgewater in the Super Dome. Cam Jordan and The Saints defense couldn’t wait to welcome him with open arms, and then take him to the ground! The Saints started with the ball, and began their trek for the end zone in the regular fashion, with Drew Brees completing passes and handing the ball to Alvin Kamara (83 rushing yards, 8 rec for 65 yards). Their first drive ended with a gift to their Big Tight End Jared Cook (3 receptions for 32 yards and a TD) and on National Tight End Day, putting the Saints ahead of the Panthers 7-0 after a Wil Lutz made PAT.

The Bridgewater led Panthers responded aggressively with a catch by Robbie Anderson, and then a diving grab by Curtis Samuel after some fancy footwork by Bridgewater to evade the surging Saints defense. Luckily for the Saints, Bridgewater got tripped up by DT David Onyemata, causing a 4th down. K Joey Slye was able to knock down a 43-yard field goal to give The Panthers their first sign of life, taking the count to 7-3, Saints lead at the end of the first quarter.

The second quarter begins the same as the first with Brees leading the Saints down the field hitting one of his receivers stepping into the roles of Michael Thomas and Emmanuel Sanders. Sanders was out due to COVID-19, and Thomas still out from injury issues. The major recipient of these targets was WR Marquez Callaway amassing 8 receptions on 10 targets and 75 yards. Callaway caught a 15 frozen rope from Brees to get the Saints set up for a Brees special, where he jumps the line and extends his arms over the goal line for the score, putting the score at 14-3 Saints favor.
Almost immediately, Bridgewater hits WR DJ Moore in stride for a 74-yard touchdown. Bridgewater came to play bringing the game within 1 score, 14-10 Saints. The Panthers were firing on all cylinders, causing a sack-fumble by DE Brian Burns giving the ball back to the Panthers on their forty five-yard line.

The Panthers finished their drive with a flip pass to the athletic DJ Moore for a 10-yard touchdown after he juked 4 Saints defenders, giving the Panthers their first lead of the game 17-14. To end the first half, Brees completed each pass to end the drive in the end zone with one second to spare with a WR Deonte Harris touchdown. The Saints lead 21-17 going into the half.

The second half would have the Panthers start with the ball. The Panthers weren’t able to get anything done on their first drive, giving the ball back to the Saints fairly quickly. Kamara continued to do Kamara things, catching the ball in the backfield and taking 20 yards, then catching another for 20 yards. The Saints continued to feed Kamara, even with a flea-flicker from Kamara back to Brees, then Brees to WR Tre’Quon Smith for a 30-yard play. The Saints were wanting to make a statement in this game. No matter the creative plays by the Saints, they were finally stopped by the Panthers and had to settle for a Wil Lutz 41 yard field goal, taking the count to 24-17.

The Panthers found a few kinks in the chain of the Saints defense with some quick plays to WR Robbie Anderson, Ian Thomas, and a score by Curtis Samuel, tying the game, 24-24. The Saints defense was looking tired and having played with the team before, I’m sure Teddy Two-gloves knew exactly where the holes were.

In the fourth quarter, Brees immediately hits Callaway for another 15-yard pass and did not let up! He continued his air raid with a 25-yard pass to WR T. Smith (4 rec for 54 yards). The next play pulled another of the Saints offensive weapons out of the game, with Marquez Callaway catching another 15-yard pass, but was rolled up and turned his ankle. Callaway would not return to the game. That play was what got the Saints within field goal range, ultimately taking the lead off a 43 yards field goal by Lutz taking the game to a 27-24 Saints lead.

The Saints defense had Bridgewater scrambling, but it seems the former Saints quarterback has gotten some shifty feet underneath him allowing him to get to a first down with 2:25 to go in regulation. Then, like a bulldozer, DE Marcus Davenport makes a play when it’s needed most, sacking Bridgewater to make the Panthers have to try for a 65-yard field goal attempt. Joey Slye had made a few 60 yarders in pre-game with distance to spare, so he very well could send this game into overtime. The snap, the kick, the silence…. the ball traveled through the air for what seems like hours, it was on a perfect trajectory to go through dead center…..NO GOOD! The ball missed the upright by what looked like centimeters! If it would have traveled a foot further, this game would have gone into overtime! 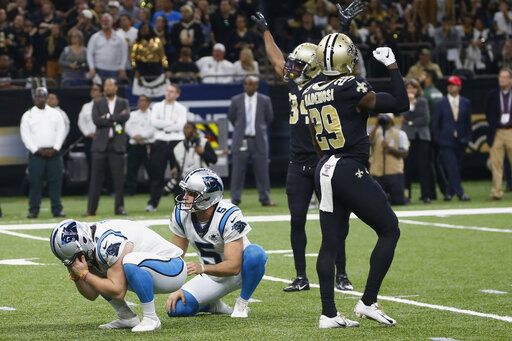 The Saints claimed the victory over the 3-3 Panthers to take their record to 4-2. The Saints are barely behind the Tampa Bay Buccaneers in the NFC South. The Saints travel to Chicago Sunday to battle Khalil Mack and the strong Bears defense! Being a huge fan of The Saints, I love that we are winning, but we need to spread the margin of victory a little more for comfort.