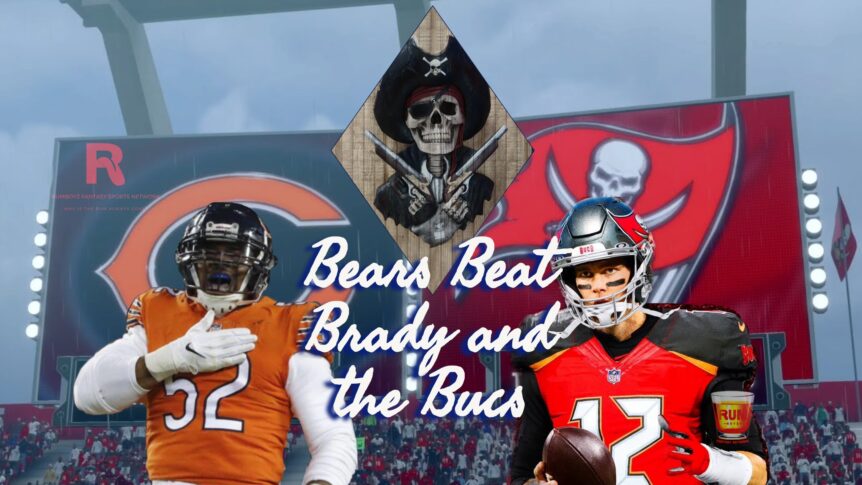 Thursday night football in Chicago. The Bears versus the Buccaneers and after a slow start the Bears rallied back and pulled out yet another win.

It was an ugly game from the first quarter to the fourth and the Bears offense once again did not show up. Chicago had no rushing attack as David Montgomery managed 10 carries for 29 yards but did end up punching in a score.

Nick Foles started off cold, missing Allen Robinson for an easy first down, then misfiring on a shot to Darnell Mooney that wasn’t even close. Foles also missed Mooney on another occasion as well as Allen Robinson on a throw that was short and ended up being intercepted.

The Bucs struck first with Mike Evans getting open for a TD reception. Two field goals later and Tompa Bay had 13 points heading in to the half. Just before the first half ended Nick Foles was able to find an ever aging Jimmy Graham for a beautiful one handed grab in the end zone to put the Bears up 14 to 13.

In the second half the Bears defense held the Bucs to just 2 field goals. The Bucs did the same but Santos made all Bear fans sweat it out with a 47 yarder and then a 25 yard kick to seal the game.

This is not a game where the offense looked stellar by any means but instead got bailed out by the defense (seems to be a recurring theme). Khalil Mack had a couple of sacks to lead the way and Kyle Fuller laid down the boom on rookie running back Vaughn who fumbled the ball. The defense showed up for sure!!!!

Nick Foles was picking up momentum and wanted to run a hurry up offense, but Matt Nagy called a time out during this one specific drive and it ended up stalling out. Later Foles was seen talking expressively to Nagy about what he saw during that drive. It’s clear that there’s a adjustment period that is needed with this QB change, the Bears have some extra time to prep for Carolina, but Nagy has to get the run game involved to help this whole offense out. Foles also needs to hit his open receivers. The Bears defense is championship caliber, the offense is still trying to find itself, all these holes and yet the Bears are still 4-1….. feel good Chicago, the best is yet to come.