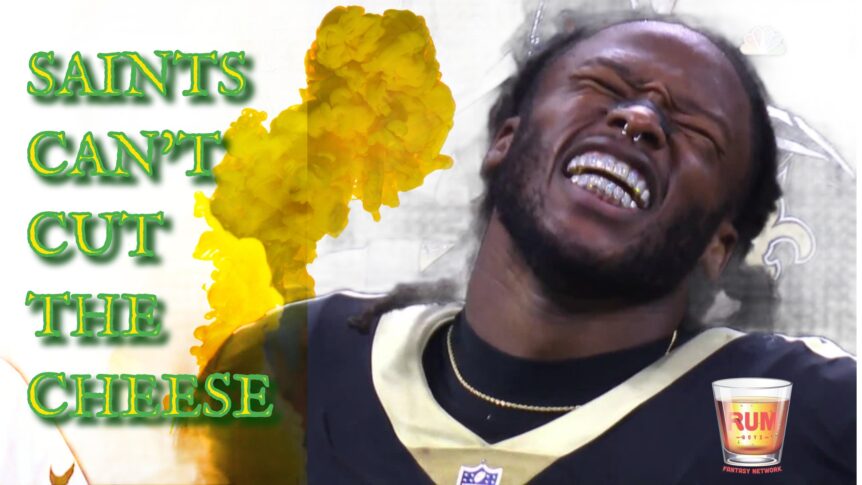 The Saints couldn’t cut the cheese…

Before the Week 3 Game

The Saints of New Orleans hosted Aaron Rodgers and the Green Bay Packers in the Sunday Night game. On paper, this game seemed to be one hell of a matchup. As a Saints fan, it was scary.

Coming off two 40+ point games, the Saints defense was inclined to snap out of whatever happened in Las Vegas. Rodgers had been his old self throwing for 604 yards and 6 TD’s in his first two contests. It’s like Rodgers heard everyone doubting him, and even though he is up against my home town team, I can honestly say I was not one of the doubters.

Now, Rodgers had something in those first two weeks that he didn’t have this week, Davante Adams. Adams has been Rodgers’ go to receiver. Brees was also without his number 1 receiver as well in Michael Thomas, for the second week in a row.

The Saints have been fairly good against the run, but faced the other Aaron in the backfield. Aaron Jones (16.60 fantasy points on 69 rushing yards and a TD, and 2 receptions for 17 yards) has shown to be one of the top backs in the game, rushing for 234 yards and 3 touchdowns coming into week 3.

The Saints started off slow defensively as the two Aaron’s ran down the field until LB Demario Davis came through with a big sack in the first quarter, causing Green Bay to settle for a 52 yard field goal made by K Mason Crosby (16.00 fantasy points).

Alvin Kamara (44.70 fantasy points), who had 174 yards from scrimmage with two touchdowns through the air, broke off a 49 yard run after Latavius Murray (5.30 fantasy points on 14 rushing yards, and 2 receptions for 19 yards) pounded the ball for 11 yards. Brees (29.52 fantasy points on 312 passing yards, 1 TD and 1 INT) finished the March to the end zone with a quick pass to Kamara for a touchdown completion. Kamara would be an unbelievable force for the Saints offense the third week in a row, but it would prove to be futile. 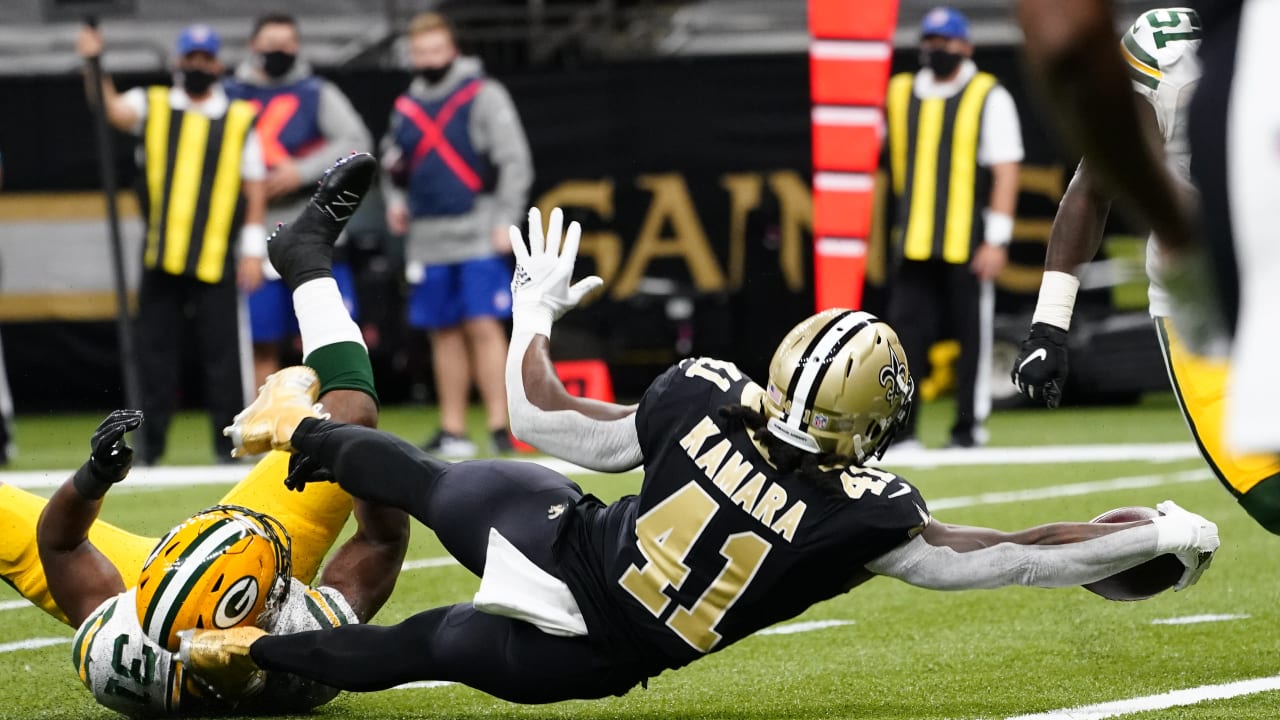 Enter the second quarter, The Saints defense were holding the Packers to field goals until Rodgers (30.52 fantasy points on 283 passing yards, 2 TD’s and 12 rushing yards) hit Alan Lazard (26.40 fantasy points on 6 receptions for 146 yards and a TD) with a 48 yard bomb, and finished the drive with a short pass to Lazard for the touchdown.

At the end of the second quarter, The Saints offense finished their march down the field with a touchdown pass from Brees to Emmanuel Sanders (15.60 fantasy points on 4 receptions for 56 yards and a TD). Here’s hoping this sparks the Brees to Sanders relationship. The first half ends with the Saints leading the Packers 17-13.

To start the third quarter, things did not get better for The Saints defense, as Rodgers hit Lazard in stride for a 72 yard completion taking them to the 3 yard line. The Saints made a hell of a stand, and you would think the Packers would have settled for a field goal. They had other plans however, going for it on 4th down and having Jones rush into the end zone like a hot knife through butter for the score, giving the Cheese Heads a 20-17 lead.

Drew Brees does his thing by completing a number of passes to Jared Cook, Emmanuel Sanders, and of course Kamara. Taysom Hill even got involved running the ball for 8 yards. Due to more penalties, The Saints had to settle for another 35 yard Wil Lutz field goal tying up the contest at 20-20

Here come the Packers, with more penalties making their drive look easy, finishing with a 20 yard touchdown to TE Marcedes Lewis quickly bringing the Packers to a 27-20 lead. 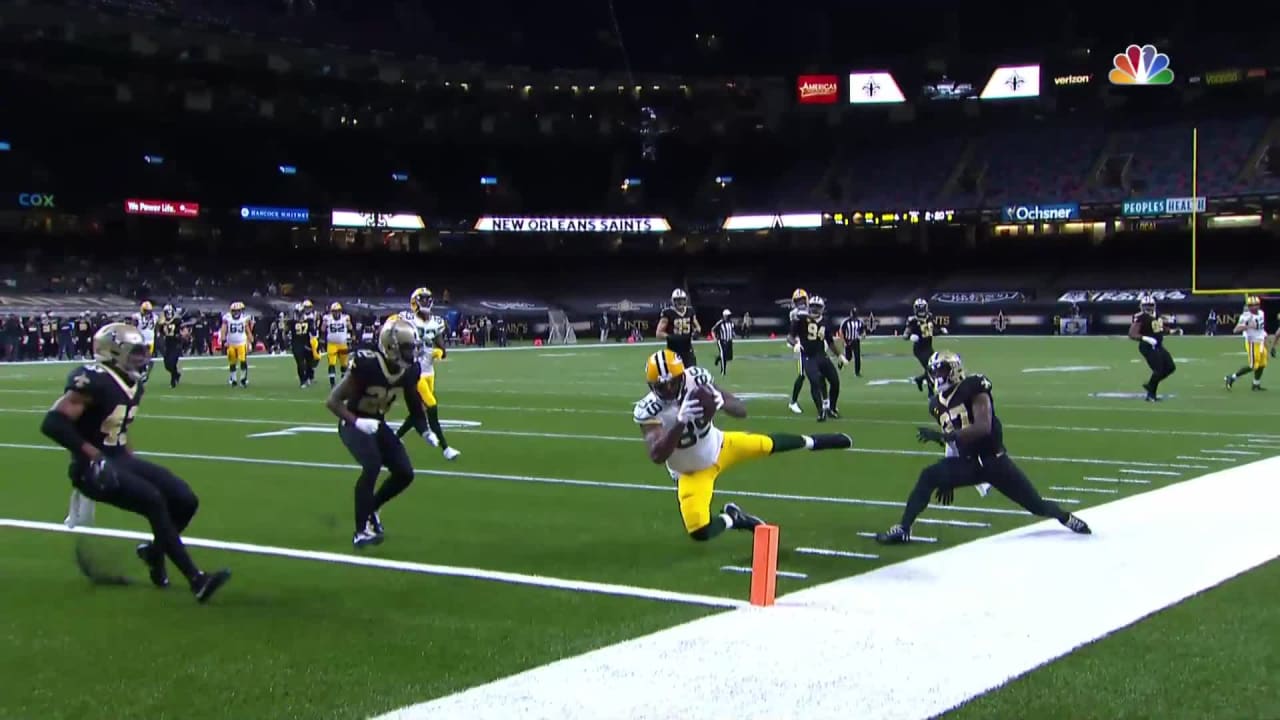 The Saints began answering with a number of plays, none more memorable than how Kamara caught an unreal 52 yard touchdown out of the backfield. While Kamara was magical on that play, the real praise needs to go to C #78 Eric McCoy! The 6’4” 303 behemoth actually ran to Kamara’s aide, actually passing the running back and blocking for him with incredible athleticism, helping to tie up the score yet again, 27-27.

Hopefully the fourth quarter would allow The Saints to get this rotating door of mayhem to finally close! No such luck, as Rodgers connected with the rookie TE Robert Tonyan right out of the gate for a first down and some change. The Packers would once again “go for it” on fourth down, but be stopped!

Finally, some daylight for the Saints to put this game away. But alas, a fumble by Taysom Hill handed the ball right back to the Packers. The Saints held the Packers to another field goal made by Mason Crosby from 49 yards out, taking the score to 30-27.

The Saints would return the ball fairly quickly on downs. And after a few passes to second year TE Jace Sternberger, and a run from Aaron Jones, it was ultimately another couple penalties that set up a one yard touchdown catch by TE Robert Tonyan. After the Saints make a strong drive down the field, they decide to take the field goal and hope for the onside kick.

The Saints tried for the onside kick to no avail, having it spin end over end and go out of bounds, giving the ball to the Packers, ultimately hammering through the Mail in the coffin. The New Orleans Saints have a lot of things to look at if they want to turn the season around. Fans can only hang their hat on “they’re only losing because of penalties, and can correct that and start winning” for so long.

They do have a point though, as The Saints have been plagued with 24 total penalties and a loss of 331 yards to said penalties in only 3 weeks. 8 penalties for a loss of 83 yards in week 3 alone. The Saints need to start marching to the best of a different drum if they are to get out of this slump. The Saints are now tied with Carolina for second place in their devision behind Tampa Bay.