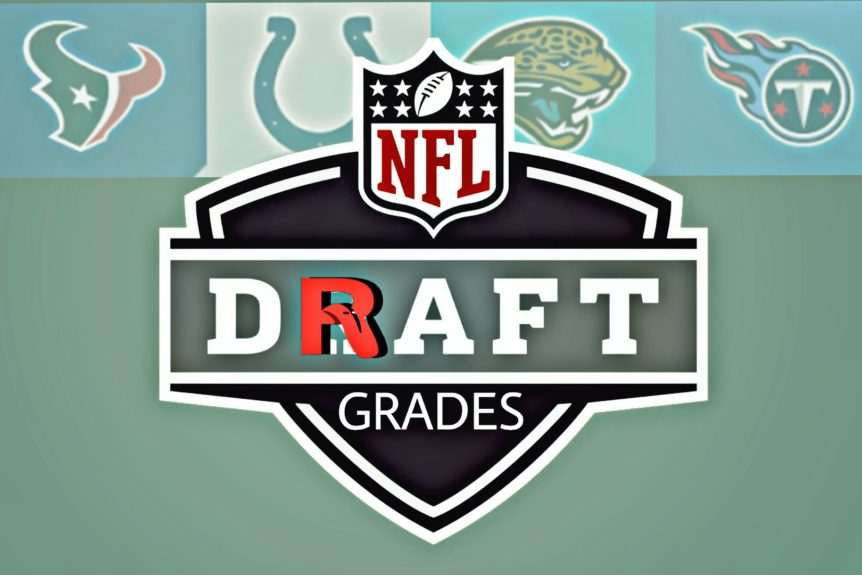 The 2020 NFL draft is now in our rear-view mirror. There were some interesting selections among the teams from the AFC South this year, but only 3 total first-rounders among the four teams. Let’s take a look at which squad jumped into the driver’s seat during this year’s draft, who’s riding shotgun, and who got left on the curb. 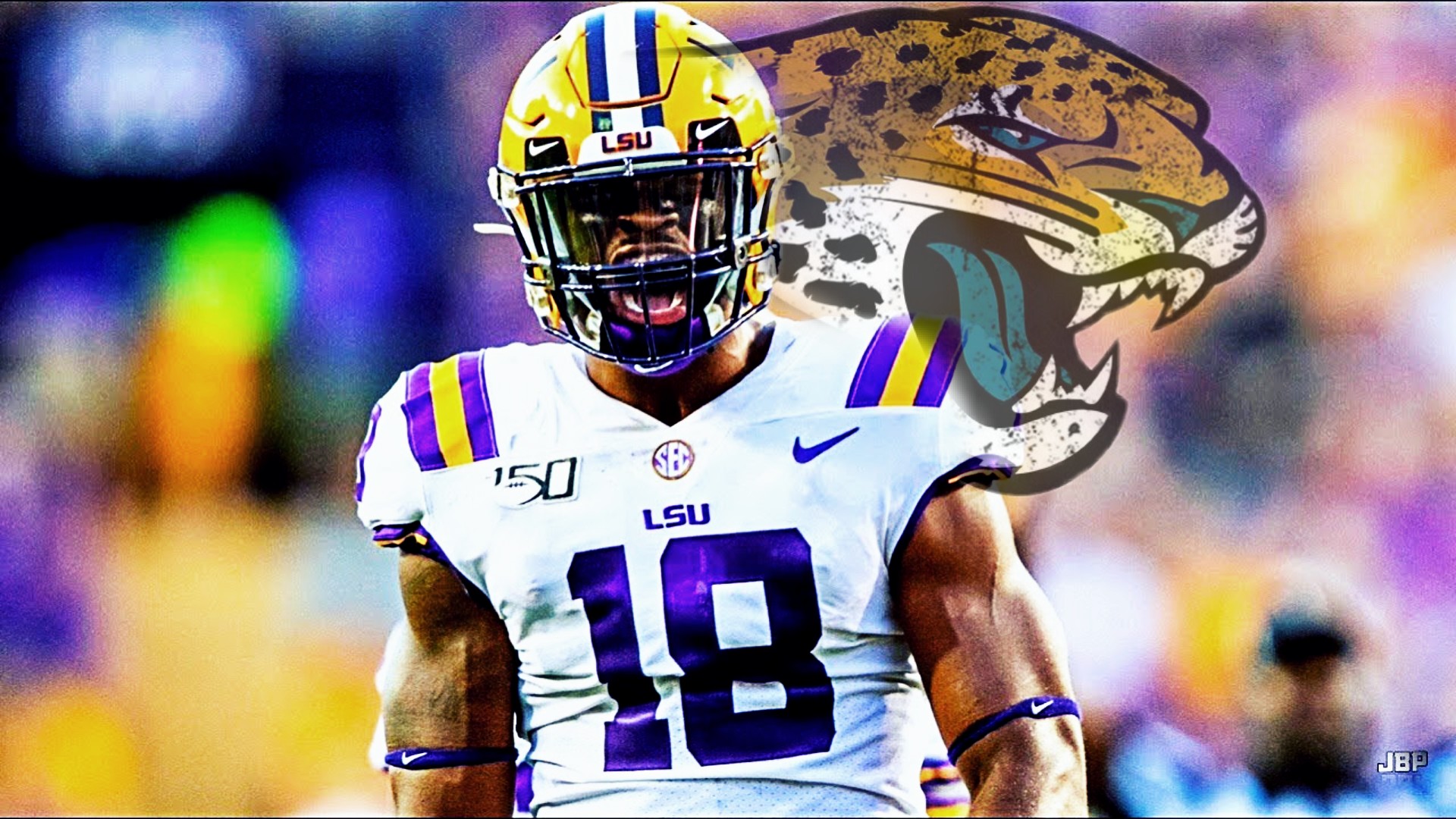 Round 1 – Pick #9: C.J. Henderson, CB, UF – Some fans may think Henderson is a reach at number nine overall, but Jacksonville has drafted heavily out of the University of Florida in the past. Henderson is also the first of two Jaguars’ first-round selections, so they had some wiggle room. Jacksonville was in dire need of a cornerback after the departure of both Jalen Ramsey and A.J. Bouey from their secondary. Henderson is likely the second-best corner in the class behind Jeff Okudah despite the slight knock on his tackling ability.

Round 1 – Pick #20: K’Lavon Chaisson, Edge, LSU – Super athletic edge rusher that fits the Jaguars style on defense well. Chaisson can be a dynamic threat with his versatility and make an impact immediately for Jacksonville. He possesses plenty of speed and explosiveness with his prototypical build but is still developing as a pass rusher.

Round 2 – Pick #42: Laviska Shenault Jr., WR, Colorado – Shenault is a ticking time bomb for big plays. He can do just about anything on the field from returning kicks to taking direct snaps out of the shotgun. With the departure of Marquise Lee from the team, Shenault will have no trouble sneaking onto the field for reps as he has round one caliber talent at the receiver position.

Round 3 – Pick #73: Davon Hamilton, DT, OSU – He is a raw and stellar run defender with a massive frame.

Round 4 – Pick # 116: Ben Bartch, OT, SJ – Solid lineman with heavy hands that can pop defenders. He does a good job mirroring his feet to his hands to finish off blocks. He could vie for playing time from day one.

Round 4 – Pick #137: Josiah Scott, CB, MSU – The Michigan State product shows up for his school as he makes it the 80th straight season they have a player selected into the NFL. Scott will most likely fit in as a nickel defender and brings combativeness to the field as he enjoys seeking out contact.

Round 4 – Pick #140: Shaq Quarterman, LB, MIA – The hometown kid will feel comfortable as the MIKE linebacker for the Jags. He can attack downhill and plug gaps in the run defense as he did as a starter for the Hurricanes in two seasons.

Round 5 – Pick #165: Collin Johnson, WR, TEX – Johnson is somewhat of a stiff runner but can AFCgo up and get the ball with his 6’6″ frame, whether he is single or double covered. He is at his best when going linear and gives his quarterback a “just throw it up” type of comfort when he is targeted. This could be huge for Gardner Minshew in the future.

The Jaguars had one of the better drafts in the entire NFL this year. They had a station-wagon full of them in what should be considered a rebuild-year. Jacksonville addressed major concerns on the defensive side of the ball in filling gaps with the cornerback, edge rusher, and linebacker positions. They also added depth on offense with some of their later picks by bringing in two talented receivers and a back-up quarterback. 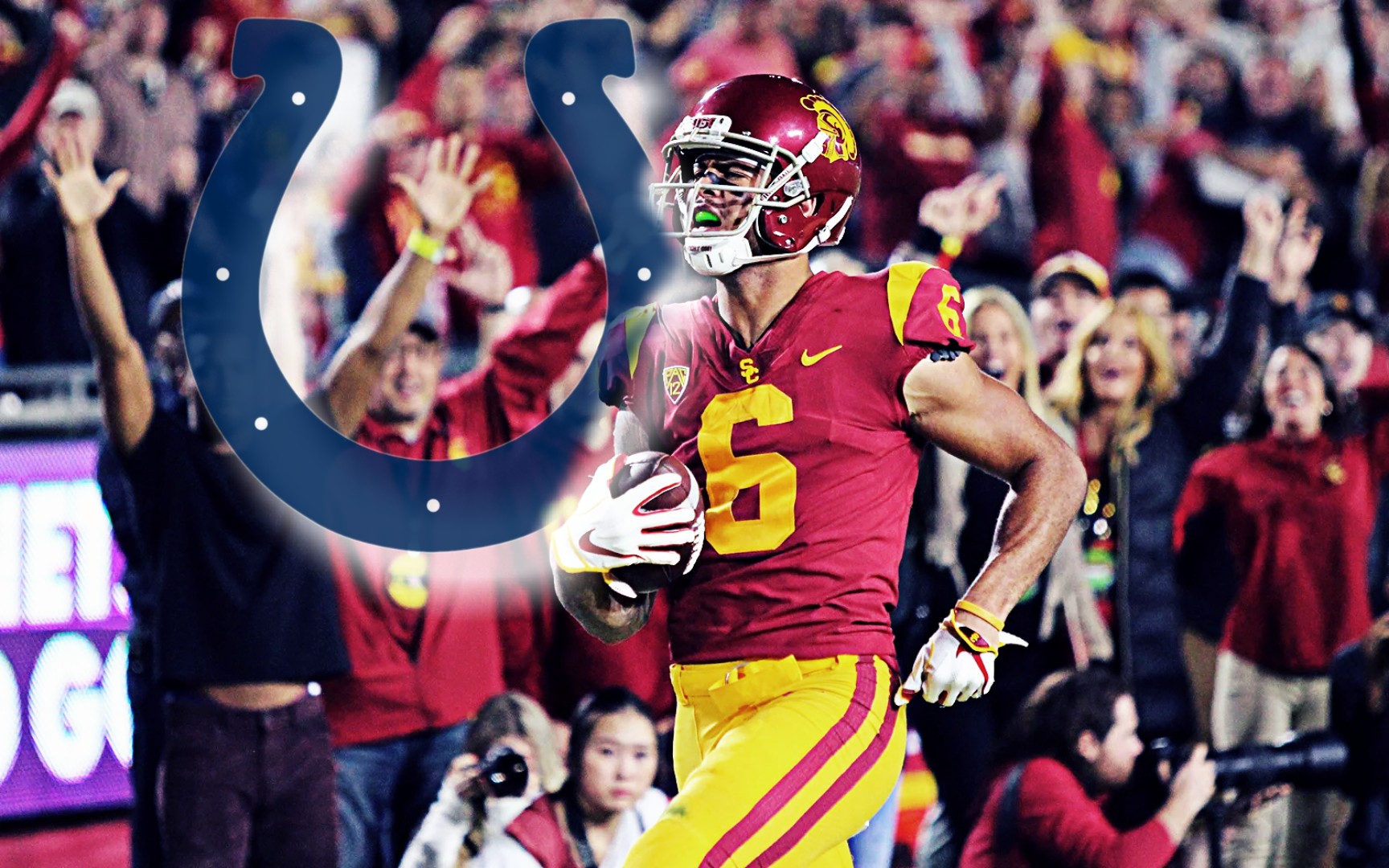 Round 2 – Pick #34 – Michael Pittman Jr, WR, USC – The Colts make a splash with Pittman in the second round. He could be a top receiver as he brings a 6’4″ / 223 lbs frame to the Colts receiving group. Pittman posted 101/1275/11 as a senior at USC. He won’t replace veteran T.Y. Hilton, though he most likely slides in across the field from him as a nice complementary piece for Philip Rivers. The newly acquired QB will have a solid target downfield to hurl the ball towards. Pittman offers a huge upside right away as both a vertical threat and an underrated YAC guy underneath. He’s an excellent pick-up with the Colts’ first selection.

Round 2 – Pick #41 – Jonathan Taylor, RB, WISC – The Colts hit the nail on the head yet again, snagging perhaps some insurance for running back Marlon Mack. Indy was aggressive giving up picks 44 and 160 to move up three spots to select JT. Taylor was the most accomplished RB in this year’s class and his is only knocks are his fumble rate and low receiving usage. If Taylor can show promise in the passing game then lookout. Regardless, Taylor looks to eat into Mack’s workload immediately. He already seems to be the favorite over Mack on early downs. Late last season the Colts saw Mack go down due to injury. Taking Taylor in the second round with the team’s second pick seems like a steal considering Mack’s injury trouble. Taylor and Mack can form a formidable 1-2 punch for the Colts even if both are healthy.

Round 3 – Pick #85 – Julian Blackmon, S, UTAH – Blackmon’s development will be key as he played cornerback for three seasons before making the change to safety in his senior campaign. Blackmon graded out as PFF’s number 5 safety despite just learning to play the position. He is a bit of a project but has starter upside at safety for the Colts.

Round 4 – Pick #122 – Jacob Eason, QB, WASH – Rivers is only under contract for one season with the Colts but don’t expect me to chase after Eason in dynasty drafts (even though I own Rivers). Eason had a rough career at Georgie before transferring to the Pac-12 where his numbers will still not stellar. He has the NFL look and arm-strength but is a bit of a project who will need to be groomed. Eason in the 4th is still a solid pick considering the Colts current QB situation.

The Colts had an extremely solid draft and a better one than the Jaguars. Some of the Colts later picks were more on the C+ or B- range as they added depth and rotational pieces to their roster. They waited until the 4th to address the QB concern but essentially stole Eason at 122 overall. With a slew of picks and excellent selections with their first 4, the Colts are definite draft winners this season. 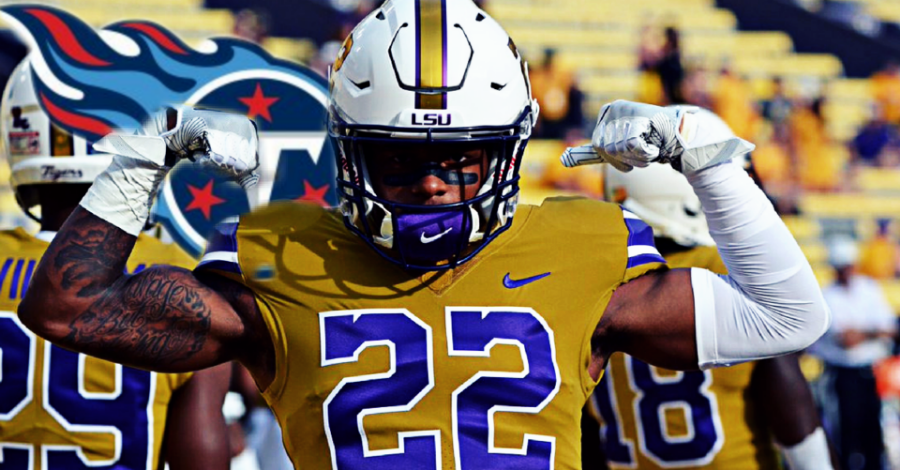 Round 1 – Pick #29 -Isaiah Wilson, OT, Georgia – Wilson will replace Jack Conklin on the offensive line for the Titans as he possesses young starter ability with room to grow. He is a huge 6’6″, 350 lbs. and earned second-team AP All-American honors in his sophomore year. He shows great promise as a run blocker. The Georgia lineman will help pave the way for Derrick Henry and Tennessee’s heavy run attack.

Round 2 – Pick #61 – Kristian Fulton, CB, LSU – It was amazing to see Fulton fall to number 61 for the Titans. Most likely because he had a friend submit a urine sample on his behalf, leading to his 2017 suspension. The talented defensive back has the skills to stay with NFL caliber receivers. He was an integral part of LSU’s defense during their championship run and his game shows up on film. He is a physical man-to-man specialist that plays on the outside with 4.46 speed.

Round 3 – Pick #93 – Darrynton Evans, RB, Appalachian State – Evans adds depth and perhaps the lightning to Derrick Henry’s thunder for Tennessee. Everything that comes to mind when initially thinking of Henry can be oppositely attributed to what Evans brings to the table. The Titans moved away from Deon Lewis this off-season and they may have drafted his replacement. Evans has speed and creative elusiveness with a tremendous ability to catch passes from the backfield. He also provides versatility on special teams in the return game.

Round 5 – Pick #174 – Larrell Murchison, DT, NC State – A bit of a project pick for defensive-minded coach Mike Vrabel here. Murchison is a late bloomer and fairly new to the position. In his senior season he was able to post 7 sacks and 12 tackles for loss in a rotational role as a defensive end and nose tackle. Tennessee adds some needed depth to the defensive line. There were no edge rushers taken in the draft by the Titans. This might be in part because they are still actively pursuing Jadeveon Clowney in free agency.

The Titans got the steal of the division in Kristian Fulton at #61 overall. The Colts traded up to grab Jonathan Taylor at #41 so lets not consider that a huge bargain. Tennessee made a wise first-round selection in beefing up the O-line and possibly replacing Jack Conklin with Isaiah Wilson. Wilson will need to beat out veteran tackle Dennis Kelly, but it wouldn’t be a surprise if this happens. Tennessee continued to bolster their run game with the addition of Evans in their 3rd pick. They then took some late-round stabs in the dark in the 7th. Stacking them up to the others in the AFC South, the Titans fall in line behind Jacksonville  B-.

In the race for the AFC South draft crown it appears that the Colts, with their first two picks in Michael Pittman and Jonathan Taylor, have stolen the keys to the flashy car. Indy made enough off-season moves on defense and inserted a veteran QB to try and make a run this upcoming season. The Colts added a much need big bodied receiver and arguably one of the best college running backs from a season ago. They receive top honors in this draft.

The Jaguars hopped into the front seat of this ride and are riding shotgun as far as the draft is concerned. They still are likely have the worst odds to win the division. Jacksonville is moving forward with Gardner Minshew at QB and added some late round weapons. Laviska Shenault and Collin Johnson could be potential steals to help bolster Minshew’s stats. They improved tremendously on defense with their fist two selections, but the Jaguars added depth just about everywhere as they had the most picks in the division with 12.

The Titans did just fine, despite whatever was going on at Mike Vrabel’s home during the draft. They drafted mostly depth and look poised to make a title run again this season. With so many picks it was hard not to give than anything lower than a B+.

The Colts didn’t have a first round pick and absolutely nailed their draft, so no excuses for the Texans. To Bill O’Brien’s credit he took what was best available, for the most part but lack of draft capital hurt the overall score. Laremy Tunsil and Kenny Stills consideration aside, the draft was lackluster outside of the first two picks. Houston’s final pick The team lost DeAndre Hopkins: Read my Final Draft Grade for the Houston Texans HERE.

If the sports car analogy for this draft holds true, then the Titans and Texans find themselves pumping the gas and checking the gauges on the slick roadster Indy and Jacksonville have taken for a joy ride. The draft is only the pre-trip inspection on the journey to the ultimate goal, so there are still plenty of miles left before we find out how all these acquisitions will play out.

Miles Peacock is a Co-Editor for Rumboyz.com and makes weekly appearances on their Rumboyz After Dark series every Friday evening via SportsCastr. Miles is also a content contributor for Timeskew.com where he covers the Houston Texans and other fantasy football related topics.

For more Rumboyz Visit us on: