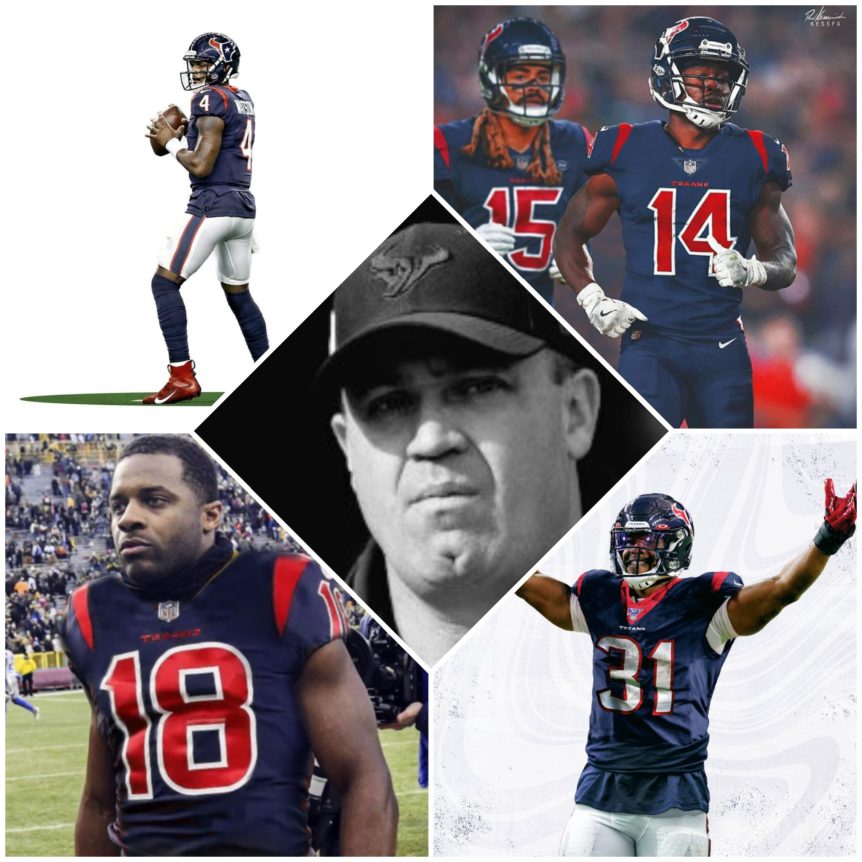 The Houston Texans head coach and general manager broke the silence on trades, free agency, and the looming draft.

Bill O’Brien finally spoke to the media today for the first time this off-season. O’Brien joined a Zoom meeting from the back patio of his home to take questions about the current state of the team. OB had not addressed the media since revamping the Texans offense with bold and questionable personnel moves at the start of the league year. After briefly praising essential workers during the COVID-19 global pandemic, OB moved over to football talk.

Out of the gate O’Brien hoped to throw a blanket of rationale over the entire press-conference by stating, “[The Texans] Coaches are excited about where the team is right now and having the best team. It isn’t about having the best player, the key is to have a room full of productive players, layers, and layers of production”. Alluding to the DeAndre Hopkins deal with the statement, O’Brien attempted to nip some questions in the bud.

With that, the discussion veered to other facets of free-agency transactions. Depth and experience seemed to be the driving force in O’Brien’s justification for bringing in three veterans in the wake of Hopkins’ departure. O’Brien says the staff uses analytics heavily from “prediction of an injury, the value of a trade, value of a contract relative to the player/market.”

“We have two receivers who have played in January and February.” BOB was speaking of Randall Cobb and Brandin Cooks, the newest veterans to join Houston’s receiving group. OB went on to term the roster incomplete, but not without mentioning that both Cooks and Cobb have been in similar systems to the Houston offense. 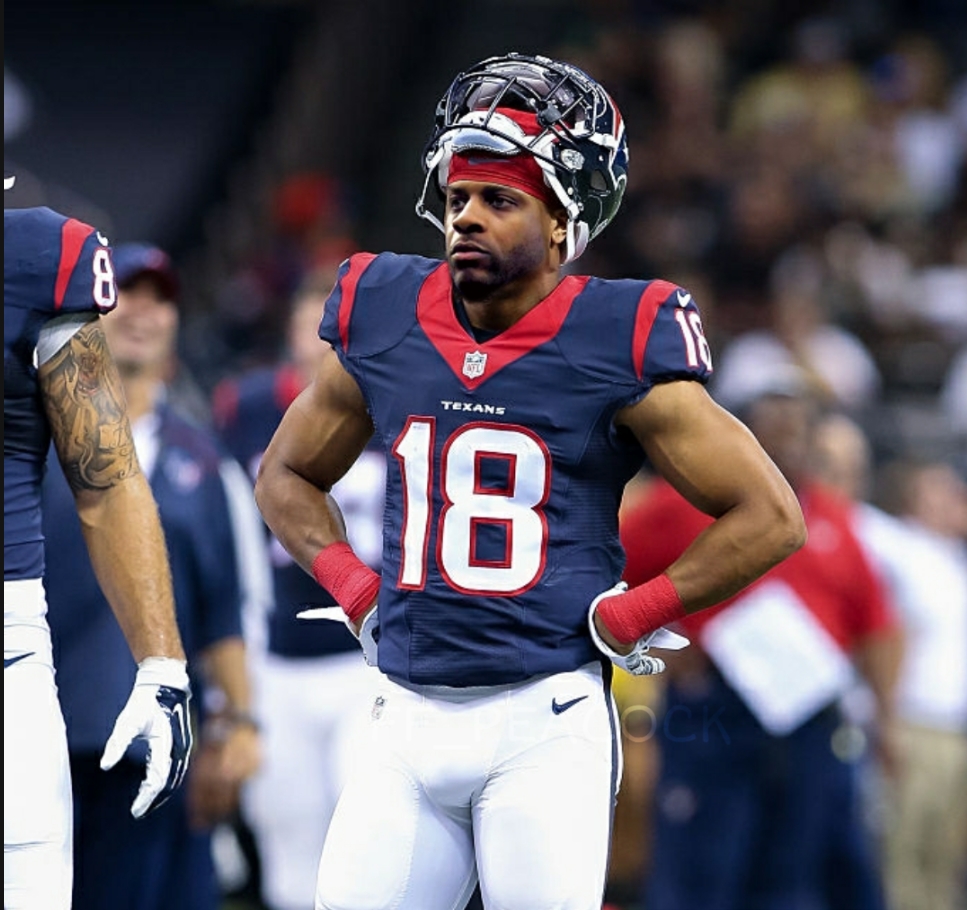 When asked about the health of newly acquired Brandin Cooks and the challenges quarantine has posed in evaluating the well-being of personnel, O’Brien had this to say: “We feel really good where Brandin’s at, relative to his health.” O’Brien says a close colleague of the Texans team Dr. Walter Lowe did the physical on Cooks in Los Angeles.

O’Brien confirmed he and his staff are watching rehabs from afar. “When we are ready to come back and play football, those guys will be ready to go”, he affirmed in regards to Will Fuller, Tytus Howard, and Dylan Cole, in particular.

BOB went on to praise Will Fuller’s work ethic during his recovery from groin surgery:

“He’s doing great. We’re excited about 2020 Will. When he’s played for us, he’s made huge plays. We feel like he’s really working.” 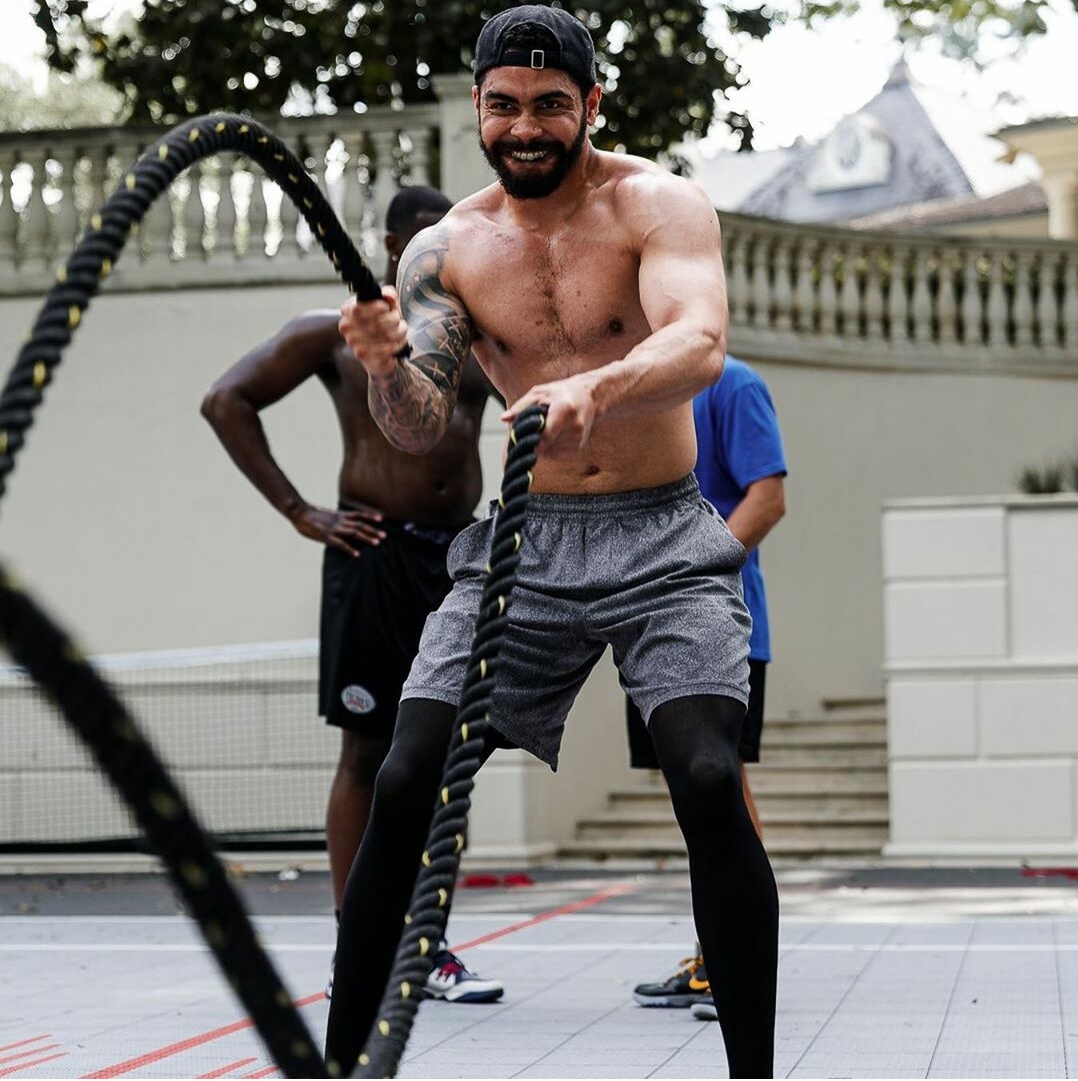 OB described his WR group as a “diverse” one and talked about all of them, including Keke Coutee and DeAndre Carter. Kenny Stills was the third receiver mentioned after Fuller and Cooks. 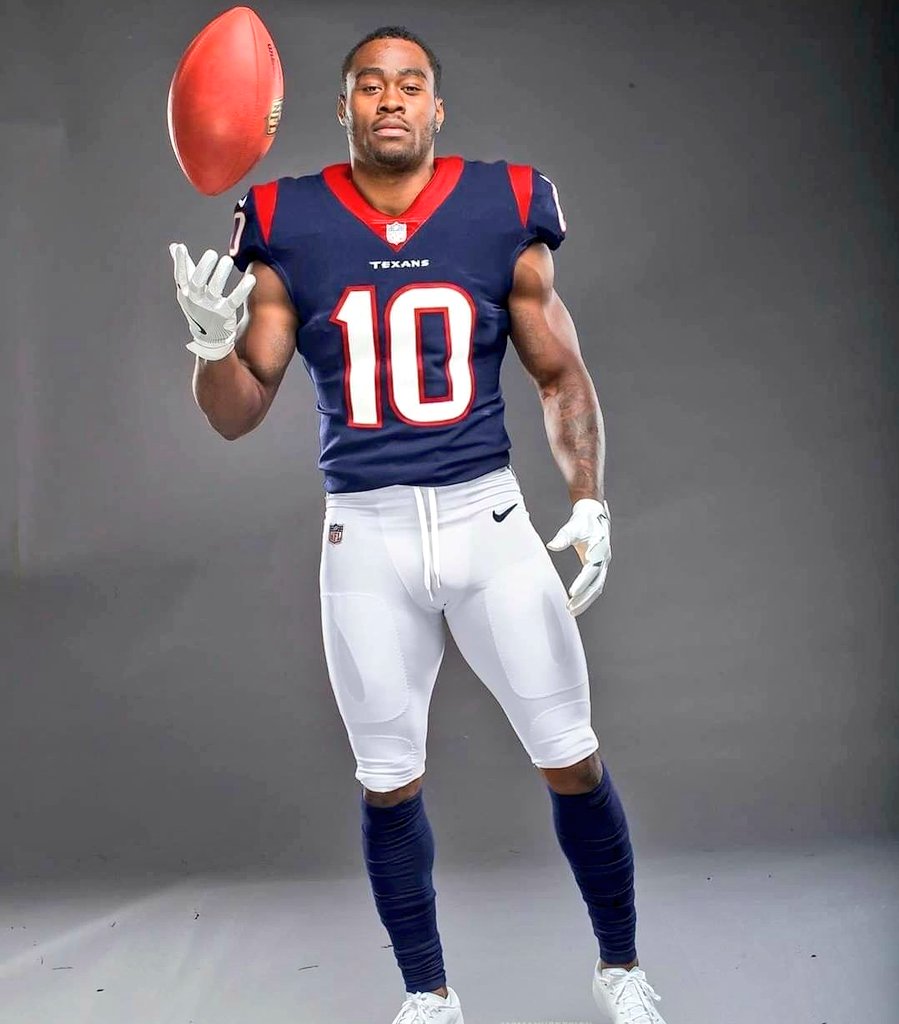 It didn’t take long for the media to probe for answers behind trading away DeAndre Hopkins. According to O’Brien, Hopkins’ contract demands were prohibitive to adding to the roster. Fans either finally got some closure or are further upset by BOB’s explanation in this press-conference.

O’Brien on navigating the Hopkins situation:

“It was going to be very difficult to have an elite quarterback, an elite defensive end, an elite left tackle, and other players, and be able to do that. We felt that after layers of research, the best decision for our team was to move him to Arizona.”

It’s clear O’Brien is aware of the backlash from his off-season antics as he stated:

“You see fans who are upset that DeAndre is not here anymore … but that move was done with relevance for what’s best for our football team heading into next year.”

This particular answer seems to be the only one we will get for the foreseeable future, but OB did have a “message to the fans”:

O’Brien maintains that finding a trade partner willing to pay DeAndre Hopkins was an integral part of moving the wide-out. According to OB, the trade with Arizona happened because the Cardinals can pay Hopkins long-term. The second part of the equation is value, and O’Brien stated multiple times that they “felt good” about the value of the trade. Unfortunately, the general public does not agree.

BOB continued by stating he expects a contract adjustment soon for Hopkins with Arizona. Which is interesting, considering Nuk still has 3 years on his current deal.

Tough questions were finally directed to OB. What was said in the conversation between O’Brien and Hopkins leading up to the trade, and was there any truth to what Michael Irvin reported about the said conversation? O’Brien’s reply was quick, “no comment.”

O’Brien, when questioned if he talked to Deshaun Watson about the Hopkins trade, responded with:

“Any conversation, with all due respect, I keep between myself and the player. I’ll say we communicated a lot with Deshaun during this time. He’s doing a great job of working out, staying in shape.”

OB elaborated on the theme of layers of players and labeled this the “Deshaun Watson Era” when talking about the Texans’ new-look offense.

Here is O’Brien on how Watson is feeling about the team forming: “He’s excited about Timmy Kelly. TJ Yates, the assistant QB coach. That’s a good room.” OB also referenced back-up QB A.J. McCarron. “It’s a really good quarterback room with a lot of experience.” O’Brien further relayed that Watson has had conversations with both Randall Cobb and Brandin Cooks.

Paraphrasing O’Brien’s thoughts on the Texans as a whole this time of year, he feels good about where they are on offense. According to him, the O-line is in good shape, the TE group is strong, they have 4-6 WRs that will be battling for positions, but when its all said and done they got to go out there and produce.

In regards to the running back position BOB had this to tell: “When you look at David Johnson, he is a 3 down back, and has been productive in this league”. O’Brien went on to declare that David Johnson trade was a “good faith negotiation that took a lot of time” and he referenced his relationship with Cardinals GM Steve Keim. 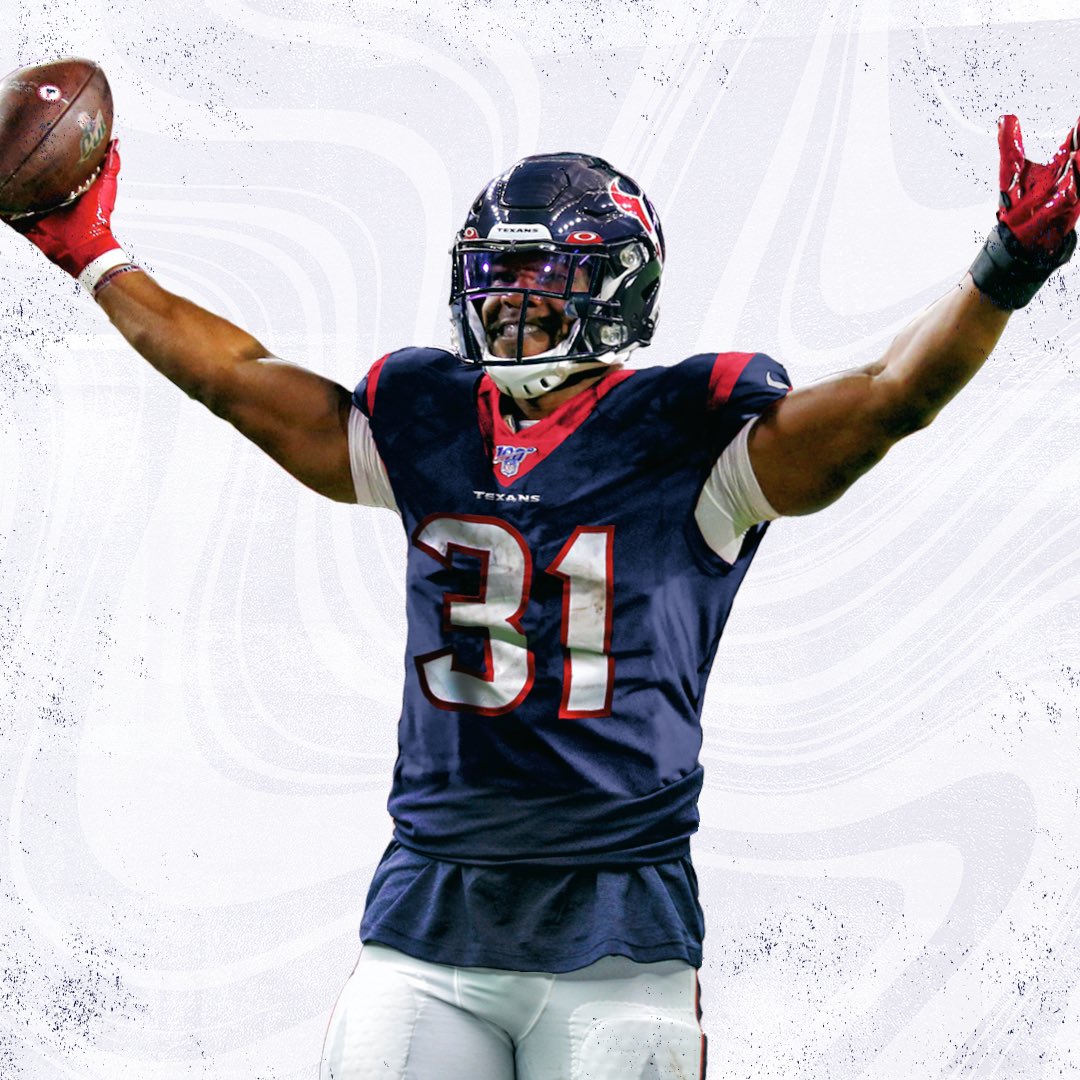 Much like with Cooks, the Texans had a doctor that is close with their team doctor perform a physical on David Johnson. O’Brien mentioned that Johnson passed his physical yesterday with “flying colors”.

The Texans virtual off-season program will begin on April 27th. According to their head coach, they will use Zoom and Discord. The Discord meetings will allow them to share and go over film with the players.

O’Brien stated that going to work at NRG Stadium and seeing players face-to-face take priority on the list of things he misses most during the lockdown. It’s his “home away from home,” but he says the staff and everybody adjusted and adapted well. “This technology is huge for us,” stated O’Brien, referring to Zoom and Discord.

Staying in shape with COVID-19 has been a challenge, but Texans players are doing FaceTime with the head strength and conditioning coach, according to O’Brien. He referenced Nick Martin’s garage weight room at his house and other veterans putting in quality work despite not being able to get to training facilities.

O’Brien responded with this when questioned about returning to a “normal” 2020 NFL season in wake of the Coronavirus:

“It’s important that before we let people back in the stadiums, we better have the testing down, we better be on our way with the vaccine. I don’t think we can move forward until we have a better grasp.”

When asked about the outlook for the 2020 season O’Brien had an interesting take about the effect of the virus:

“I truly believe this is a veteran type of year” and he thinks it will be tough for rookies to adjust because of the off-season programs being altered due to the pandemic.

Bill O’Brien also brushed on the defense, saying they tried really hard to keep DT D.J. Reader, who is now with the Bengals on a massive contract.

OB had this to say about looking to draft an interior defensive lineman:

“I feel god about our D-line, but when you lose a player like DJ Reader and I am not saying you can replace DJ Reader in the draft. [We] Feel good about JJ, Blackson, and Jernigan but I feel we need to add depth there”. He continued by saying they will “Draft at who is the best player for your team at that pick”, whether it is the defensive line, safety, etc. It is true the Texans do not have one specific need, but several.

Matt Musil asked OB for his thoughts on the secondary, he had this to say:

When questioned about the challenges of interviewing draft prospects, O’Brien says they have “FaceTime’d a lot of guys, also called on the phone, used Zoom, and studying film…There’s been a lot of challenges but we’ve been able to do a lot of things to be ready for the draft.”

O’Brien said he’s had draft meetings on the back porch with Jack Easterby and director of player personnel Matt Bazirgan. He stated that they are practicing social distancing and stay “10 feet apart” and added, “We feel very good about our preparation for the upcoming draft”.

When asked about the new DC and OC O’Brien said, “Tim Kelly and Weaver have done a great job, just yesterday they sent me their ranking for the draft. They have done a really good job staying in touch with their guys”.

The Texans position coaches and coordinators are submitting their ranked prospect lists to O’Brien. He stated they have “had a lot of input in the draft”.

In regards to drafting a wide-out recruit in 2020, O’Brien says it’s a good versatile group of wide receivers in this draft class. “We may draft a receiver, who knows. If that’s what’s best for our team.”

As of today’s press conference it seems as if though Bill O’Brien’s answer to all questions will be team over everything.