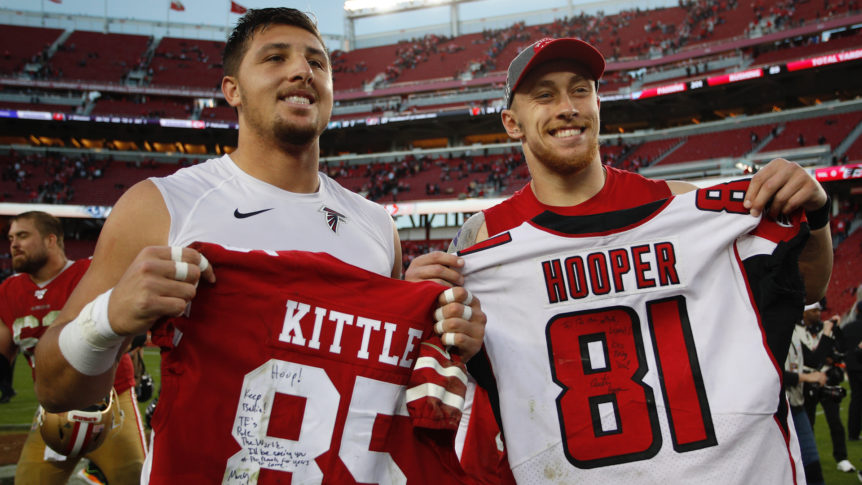 There is no doubt the early NFL free agency period produced a plethora of commotion. While some major moves left you you scratching your head, others were eye-opening with the excitement of untapped opportunity. Regardless of how the movement is perceived, fantasy managers should take note of the changing complexion of the tight end landscape.

George Kittle and Travis Kelce are elite draft day no-brainers on tiers of their own, but forking over high draft capital can cripple a fantasy team if you swing and miss on a one-off position like the tight end (or if Hunter Henry gets hurt and you don’t have an IR spot). What should be done if you are faced with a tight end run on draft day or decide to punt the position?

Recognizing this year’s Mark Andrews or Darren Waller is vital in a scene where there are less than a handful of top-notch fantasy assets to consider. For Andrews, we saw a rise in his usage late last season after Hayden Hurst went down with an injury. Usage could be a combination of snap percentage and/or target/carry share in an offense. Given Lamar Jackson’s tendency to hyper-target the TE we could see the potential breakout coming for Andrews. In Waller’s case, the tea-leaves were spread out before us in the off-season during HBO’s Hardknox series. With no true WR 1 on the Raiders and all the praise Coach Gruden dished out, there was seemingly no way Waller would not excel.

Andrews and Waller share a commonality, opportunity. Opportunity is key for fantasy relevance, especially at the tight end position. Movement in players’ fantasy values based on a new opportunity and the vacancies left behind can help us identify potential 2021 breakout candidates at the position before our competitors do. 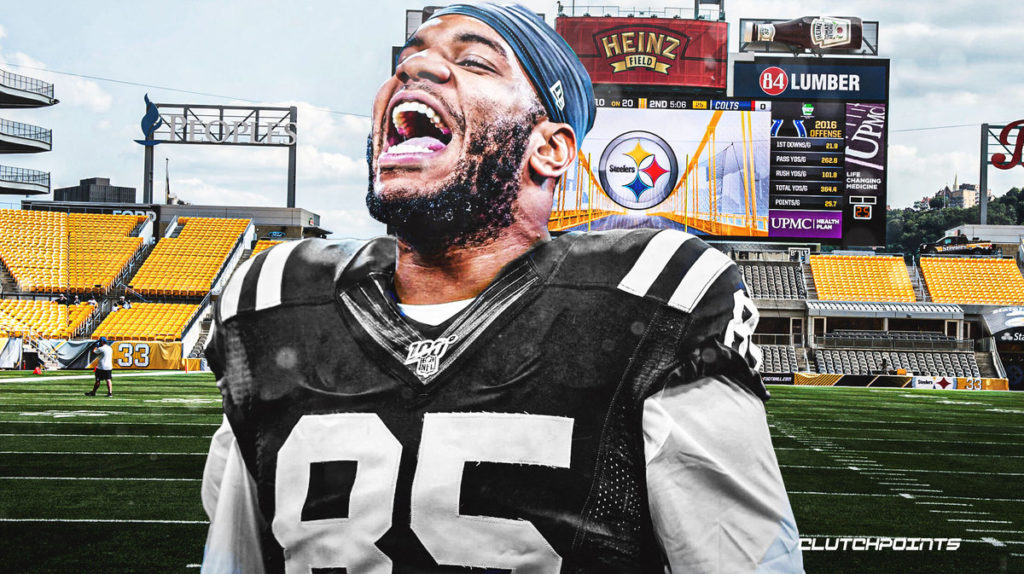 This one could be a double-edged sword, but ultimately Eric Ebron’s fantasy value is back on the rise after a down year. Ebron receives a QB upgrade and moves on from the Colts’ Jacoby Brissett in Indianapolis to join Ben Roethlisberger in Pittsburgh.

Ebron never exceeded 86 targets or 61 receptions within his first 4 years in the league playing for Detroit. Matthew Stafford and the Lions either simply didn’t utilize his 6′ 4″, 253 lbs frame correctly, or Andrew Luck just took full advantage of Ebron’s size around the goal line.

In his first year with Indianapolis in 2018, Ebron accumulated 110 targets, 66 receptions, 750 receiving yards and a whopping 13 touchdowns (all career highs). In comparison, Ebron had only scored a combined 11 touchdowns in his entire 4-year stint with the Lions.

Ebron returned to pedestrian fantasy output with Jacoby Brissett under center for the Colts in 2019. His numbers plummeted to 31 receptions on 52 targets (2nd lowest of career) and only 3 scores. Luck’s early departure and various injuries kept Ebron from a powerful 2019 fantasy performance. Brighter days seem to be on the horizon, Ebron lined up in the slot and out wide the majority of the time while in Indy and could be used similarly in Pittsburgh.

In 2020 Ebron will have the benefit of a healthy Big Ben hurling the rock in his direction. Receivers Juju Smith-Schuster and Dionte Johnson are set on the perimeter for the Steelers and are the only other challengers to Ebron’s target share. Unfortunately, Big Ben hasn’t had a stud fantasy TE since the days of Heath Miller, and Vance McDonald isn’t going anywhere. Much like Jack Doyle, however; McDonald shouldn’t derail Ebron’s appeal near the Red-Zone.

Ebron should be able to command the majority of the snaps over McDonald as the primary receiving tight end that can provide mismatches in valuable Red-Zone situations. Ebron will turn only 27 this year so he still has dynasty appeal. Given his size and history as a scorer with double-digit touchdown upside, Ebron is a perfect late-round candidate who could return production similar to what he put up in 2018. 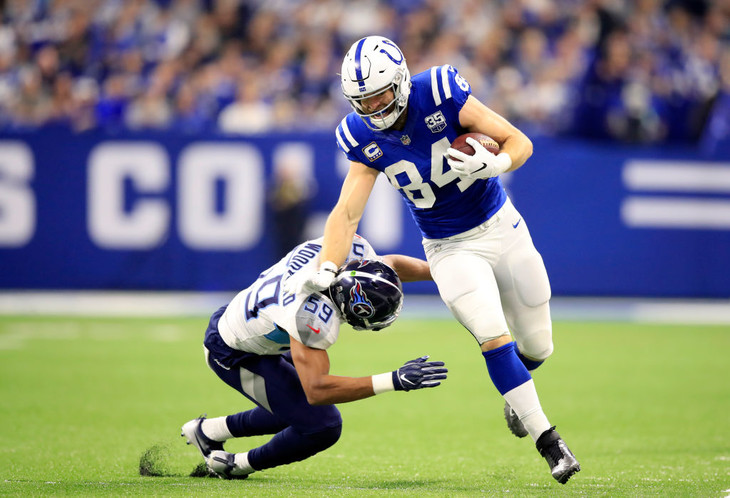 INDIANAPOLIS, INDIANA – NOVEMBER 18: Jack Doyle #84 of the Indianapolis Colts runs the ball against Wesley Woodyard #59 of the Tennessee Titans after a catch in the second quarter at Lucas Oil Stadium on November 18, 2018 in Indianapolis, Indiana. (Photo by Andy Lyons/Getty Images)

In direct correlation to Ebron’s departure, Jack Doyle receives a slight boost in 2020 as he slots himself in as the Colts primary receiving tight end. He finished off last season on an inconsistent basis and his production seemed lacking. That lack of production can likely be traced back to quarterback play and the void left by Andrew Luck’s early retirement. Eric Ebron also saw production dip with Brissett under center. Luckily, Indianapolis has historically targeted the tight end with frequency and that doesn’t seem likely to slow down with Philip Rivers taking over in 2020. The Colts passed on Tom Brady, deciding to go with the “elite” Rivers who they claim doesn’t show signs of slowing down.

Though approaching the dreaded 30 years of age, Doyle signed a 3-year extension with the Colts worth $21.3 million. He didn’t offer much in return for the investment, but that was with shaky QB play and a crowded tight end room. With Ebron now gone that leaves only Mo-Allie Cox to vie for targets from Rivers. The new Colts QB also has a history of peppering his tight ends (Antonio Gates/Hunter Henry) with the football during his long tenure with the Chargers.

Doyle saw 72 targets last season despite splitting time with Ebron and that number should rise significantly with the upgrade at signal-caller. Rivers targeted Hunter Henry 76 times in only 12 games last season with the Chargers. In 2019 Doyle’s yards per reception were the highest ever in his 7-year career, and he also managed to find the end-zone on 4 occasions, one short of his career-best.

Penciling Doyle in for a potential top-12 finish at the position wouldn’t be as crazy as it seems. Why is that? Simply put, who else is going to catch passes for the Colts next year? Indianapolis has TY Hilton, Parris Campbell, Zack Pascal and…well that’s about it. Sign me up for Doyle one last time in redraft leagues, especially as a late-round punt play. 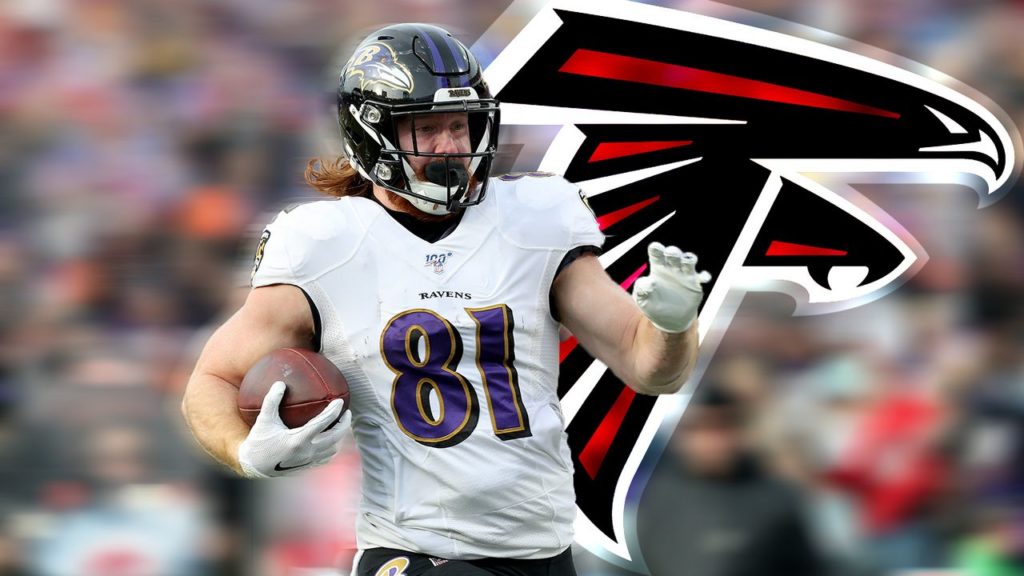 Now here’s a guy that was a first-round draft pick (25th overall) out of South Carolina and then had a ton of breakout hype in his rookie season with Baltimore. Like most rookies, he fell short of that hype. Hurst couldn’t stay on the field and was ultimately beat out by the undrafted Mark Andrews. Last season in Baltimore Hurst accounted for 30 receptions on 39 targets, 349 yards, and 2 scores. He was extremely efficient despite sharing duties with two other players in the position. Hurst’s efforts were enough to earn himself a trade to the Atlanta Falcons for a fourth-round pick in the 2020 Draft in return for 2020 second- and fifth-round picks.

Now out of the shadows of Mark Andrews and Nick Boyle, Hurst moves to a pass-happy offense that features the tight end position extensively. The opportunity is wonderous. So much so that expecting Hurst to skyrocket up draft boards and expert rankings is almost a given.

Last season the Falcons attempted 684 passes. Austin Hooper was the recipient of 97 of those attempts. Hooper turned the 97 targets into 75 receptions for 787 yards and 6 scores. That was good enough to quietly finish as the tight end 6 for the second consecutive season. The amazing thing is that Hooper accomplished this in only 10 games in 2019, but more on Hooper’s inability to stay healthy in a moment. Hooper went for 71 catches on 88 targets in 2018, resulting in 660 yards and 4 touchdowns. He was able to hit those numbers in only 8 games.

The hope here is that Hurst can stay healthy enough to play an entire season. The young Hurst has career numbers in two seasons that add up to about 6 games in any of Hooper’s last two years in Atlanta. With Matt Ryan constantly targeting the TE in the seam and with Julio Jones/Calvin Ridley taking most of the attention, anticipate Hurst to feast in his first season with a featured role. 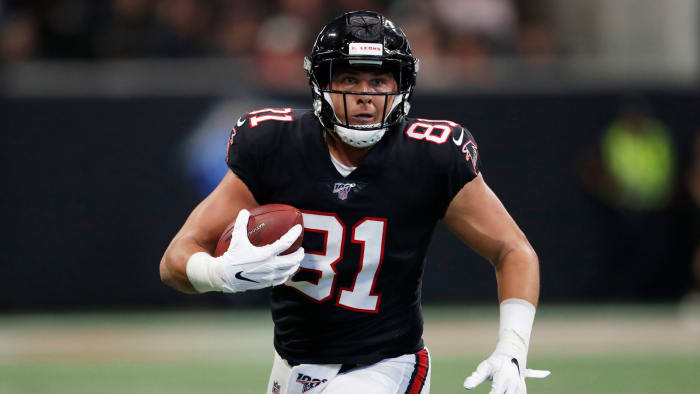 He was briefly mentioned when highlighting Hayden Hurst, but Austin Hooper is the only TE mover that takes a hit to his stock. If you were a savvy owner who scooped up Hooper late the last two seasons then you most likely rode the injury wave to his cheap price. Hooper is notorious for not being able to string a complete season together, but he offers safe and consistent fantasy production when healthy.

Well now not even that is sacred as he receives a quarterback downgrade in his trade to Cleveland. Moving from Matt Ryan to Baker Mayfield hurts, especially because the Browns already have an athletic tight end in David Njoku returning from injury. I suppose the train of thought here is that the team will be able to piece a complete season together from both Hooper and Njoku.

The Browns threw the ball 539 times in 2019 and only targeted the tight end position 69 times as an entire unit. Struggling for opportunity among the position isn’t the only thing Hooper owners should worry about with OBJ and Jarvis Landry soaking up nearly 280 targets last season. Throw in another 100 targets to running backs Nick Chubb and Kareem Hunt, a number that will likely go up considering Hunt saw 43 targets in only 8 games after suspension.

When it’s all said and done in Cleveland the outlook doesn’t look good for Hooper. Baker Mayfield is still developing and there are so many moving parts with the turnover in the coaching staff that it would be hard to argue for Hooper going in and finding a comfortable niche with the offense right away. Unfortunately, there are too many mouths to feed in Cleveland and Hooper stepped away from one of the most opportunistic offenses for the position into one of the most uncertain ones for 2020.

For more Rumboyz Visit us on: