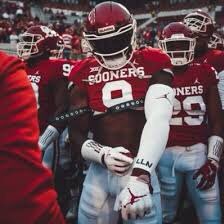 Throughout the past 2 months, I have begun the process of scouting, taking a look at a variety of prospects’ tape. While I started with defensive backs, my first article is going to be on one of my favorite prospects coming out of the 2020 NFL Draft, and that is Kenneth Murray, middle linebacker from Oklahoma. In this article I will talk about the highs and lows of Murray’s tape. Let’s get into it.

Murray, being from Oklahoma, may get a lot of bad rep from all the casuals out there. You may hear that he’s bad because he plays on a horrid Oklahoma defense, but this is most certainly not the case. If you at least have the slightest bit of knowledge of college football, you’ll be able to see and know how much of a monster Kenneth Murray is. He was the heart and really only soul (no disrespect to Neville Gallimore) Oklahoma had on defense this past season, always turning scouts’ heads every game and every play he was in on. Let’s get into a couple tape breakdowns.

Oklahoma vs Texas, 2019: Throughout this game, well basically all games this season, Murray was able to show off his athleticism. Being one of the most athletically gifted linebackers in this draft, Murray was all over the field. In this game, Murray was always around the ball, reading the QB and navigating through traffic. He was able to find the ball carrier and make a play, totaling five tackles, along with one sack.  While Murray did show a small bit of bad decision making in this game, he made up for it in being a big time playmaker throughout the entirety of the game, helping Oklahoma’s defense stop the bleeding late, and come out with a victory.

Oklahoma vs LSU, 2019: While the last film was one of Murray’s best, this one is one of his worsts. In this game, only two pros really stood out. Those being his consistent tackling and his effort on every play. As he had all year, Murray was a consistent tackler in this game. He showed great effort on every play. Even when being down three or four touchdowns, Murray did not give up. For the rest of his play, probably the worst he had played all season. Yes, late in the first quarter he had a small injury, but he came back into the game on the next drive. Murray at points, seemed lost in coverage and there were a bundle of plays where he made terrible decisions. In his defense, the Oklahoma defensive line was terrible, totaling a whopping one sack, and getting almost zero pressure on Burrow. However, that does not totally defend Murray’s case, as he made more bad decisions than usual. Whether it was leaping for a tackle too early, or shooting for the wrong hole when rushing the passer, Murray did not look like himself.

Going into the NFL Draft, Murray should be regarded, as the best middle linebacker in this draft class, excluding Isaiah Simmons. Almost every season of his college career, he showed consistent play, and an insane athletic ability. When the draft comes around, expect Murray to be a middle first round selection, but possibly falling to the back end of the first round.