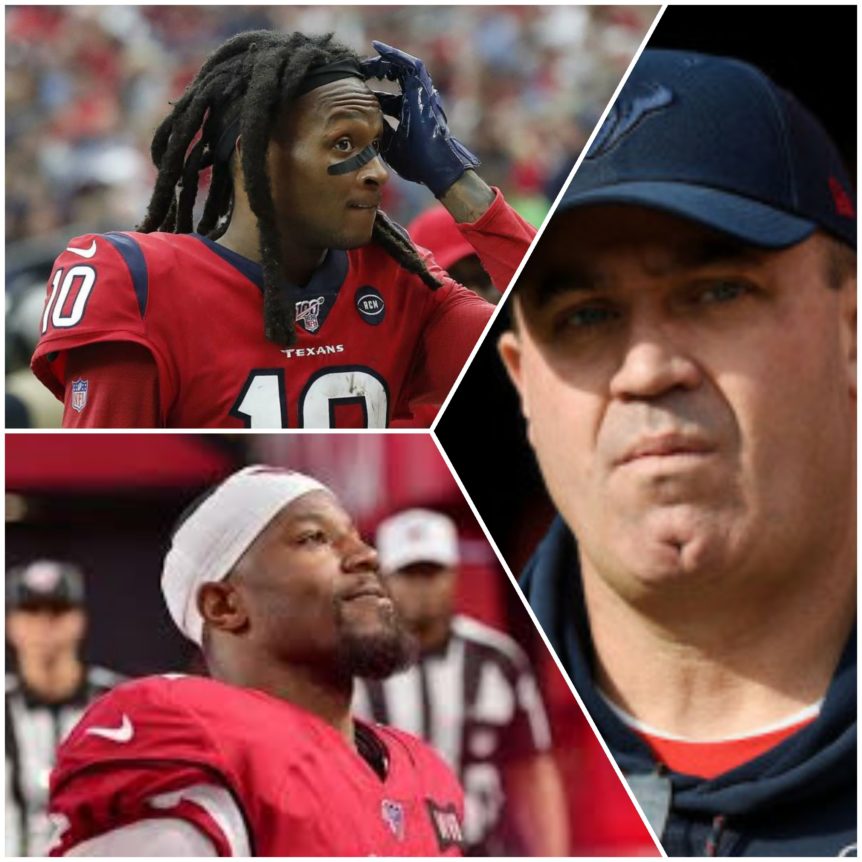 The 2020 free agency whirlwind hit hard at the start of legal tampering on Monday. Of the big moves made within the first 24 hours, none were more unexpected than the Houston Texans parting ways with superstar wide receiver DeAndre Hopkins. Analysts, fans, and even teammates of Hopkins were shocked to hear the news, and the fallout has not been pleasant.

Bill O’Brien has tested positive for the most incompetent general manager in league history. At least that seems to be the consensus on social media.

Fans are not so much agitated with the fact that O’Brien sent off the best receiver on their roster, and perhaps the entire NFL, it is the fact that O’Brien did so and got what feels like nothing in return. Hopkins was sent packing for Arizona Cardinals running back David Johnson, a 2020 2nd round pick, and a swap of 4th round picks from 2020 to 2021. In comparison, the Minnesota Vikings hauled in a 2020 1st, 5th, 6th, and a 2021 4th round pick from the Buffalo Bills for receiver Stefon Diggs. In other words, the Texans got fleeced again.

The quick fantasy implications are that Deshaun Watson takes a hit while Kyler Murray sees his stock rise a bit. DeAndre Hopkins was a stud with guys like Tom Savage, T.J. Yates, and Brock Osweiler slinging the rock so his stock moves sideways. The plethora of receivers drafted by Arizona a year ago takes a huge dive with the arrival of Hopkins. He’s still a top 3 receiver in the league on talent alone. Duke Johnson will most likely retain the same value considering how sparingly he’s been used in Houston, despite great production.

The verdict is still out on David Johnson’s fantasy impact. While it ultimately cements the Kenyan Drake era in Arizona, the former 2016 1st Team All-Pro is now entering his 6th season and production has fallen off tremendously since. Injury concerns linger as they have wrecked 2 of the last 3 seasons for DJ. Johnson was the fantasy RB 7 in his rookie campaign and seized the top spot the following year. Injury derailed his 3rd season after only one game, but he returned to put up a top 10 finish in 2018, although fantasy managers were a bit disappointed considering his high average draft position. Bringing in David Johnson gives the Texans a running back who has proven he can do both run and catch passes, although I would argue that they should have just given the reigns over to a running back that they traded for last season in Duke Johnson. David Johnson will be the 3rd running back the Texans trade for in the last 2 seasons.

Johnson comes to Houston with the remainder of his contract, roughly 3 years for $39M. It’s crazy, but Hopkins had 3 years remaining at roughly $39.9M. That is virtually identical. Recent reports from a source close to the former Houston star said that the Texans approached Hopkins stating that he outplayed his contract and the team didn’t have the money to pay him. Funny thing is that Hopkins never asked for more money according to the source.

There are always two sides to every story. Sources close to the Texans front office report that issues of money and contract had been brought up in the weeks prior to the trade of Hopkins. Apparently Nuk was searching for a salary in the $18M – $20M a year range. That price tag is one O’Brien knew he couldn’t match either now or down the road. The Texans are still expected to ink Laremy Tunsil and Deshaun Watson to huge deals.

Michael Irvin most recently shared inside information about a meeting Hopkins had with O’Brien in which the Texans GM supposedly called Hopkins out for his locker room influence, comparing him to former Patriot Aaron Hernandez. O’Brien also cited the presence of the various “baby mamas” around the team facility with his locker room gripe. Hopkins has never been in any kind of trouble either with the law or the NFL. Throwing a known murder’s name around and showing a disdain for Hopkins’ family ties isn’t a way to smooth over new contract negotiations.

“This is being blown way out of proportion. As I’ve said before, I enjoyed and am proud of my time with the Texans. I have the utmost respect for Coach O’Brien and that will not change.  Now, I’m ready to play for the Cardinals.”

It also feels as if though O’Brien was targeting David Johnson, willing to give up anything to get his man. Little did O’Brien know that by giving up Hopkins he surrendered any last shred of respect or trust he had with the Houston Texans faithful fans. Either way, GM/head coach Bill O’Brien is now potentially the most hated man in Houston. Houstonians searching for a silver-lining can hang their hat on the Astros scandal having been placed on the back burner, for now.

O’Brien’s failure to properly assess a player’s value is apparent in just his first 5 trade negotiations since identified as the team’s general manager:

While the rest of the NFL GM’s are playing chess, O’Brien is playing Madden, and even the franchise mode will not allow the majority of these transactions to occur.

Morale in Houston feels to be at all time low. It was painful to even type up this column, but perhaps it is time to focus on what the team can still accomplish with its current assets. The Texans will continue to get roasted until bigger news breaks in the coming days. Honestly not much else can agitate and insult Houston sports fans at the moment. At least the Texans still have Deshaun Watson, for now.