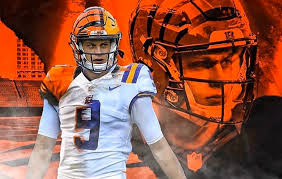 Measurements: 6’3/221 LBS
40 Time: DNR
2019 Stats: Joe Burrow had the most dominant season of any college player I have ever seen. He posted 5,671 passing yards, had 60 total touchdowns to only 6 interceptions. Simply dominant is the only was to describe this past year from Burrow.

My grade: Joe Burrow is a lock to go no.1 in this draft. There is no doubting that however on my Big Board, Burrow is sitting clearly at number 4. He is behind three defensive players. He is a great Quarterback prospect, as most QB prospects are never inside a top 5 of a scouts big board however Burrow has broken the mold. He fits exactly what a team wants as a semi mobile quarterback with ideal height and the ability and arm talent to make any throw the team needs.

The Fit: Usually there will be a good fits and bad fits section in these breakdowns however in this case ther is no other possible landing spot for this player.

Cincinnati Bengals: The Bengals have decided numerous times to go with Andy Dalton and while I would very well resonate this blame on Marvin Lewis as the next head coach came in here and so no, so now Dalton is leaving have neglected the quarterback spot since 2011. Since 2017 the year after Dalton’s claim to fame year I have been pounding the table for this terribly ran organization to use the voice of reason and get a new Quarterback and now there is no doubt they will. Holding the no.1 pick will allow the Bengals to hopefully add Burrow and get his career on the right track as the Bengals have an above-average supporting cast when healthy. Improving the offensive line and their defense while easier said than done would be the primary motives going forward. This move should prove the Bengals to be playoff contenders by no later than 3 years from today.