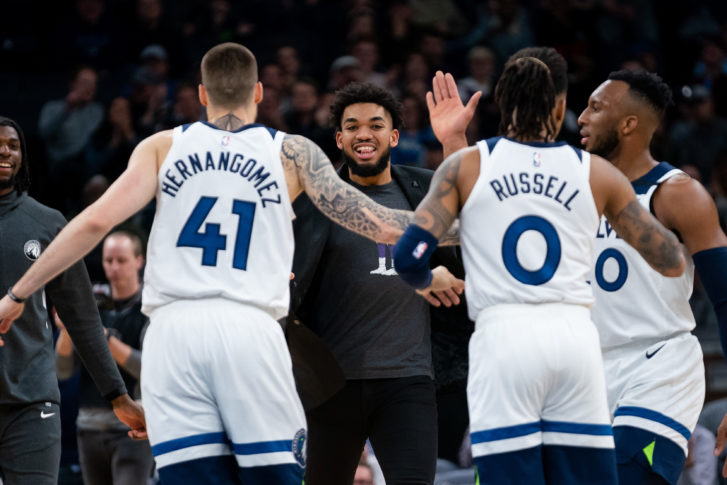 After a couple different moves at the trade deadline, the Minnesota Timberwolves have a new look. They have struggled so far, with a 16-37 record, but those trade-deadline moves have triggered the reset button. A new beginning. With De’Angelo Russell and Karl-Anthony Towns in the same lineup, they have the starpower. A supporting cast of Malik Beasley, Juan Hernangomez and Josh Okogie isn’t the best, but there is potential for them to step up at times. Naz Reid, James Johnson, Jarrett Culver and others look to make a impact of the bench to support that starting 5. They have the potential to be a good team, and I expect them to have a good year. Next Year. A phrase that as a Reds fan, I have heard too much of. With that 16-37 record, they figure to get a draft pick in the top 5. Their clear need is at the forward spot, so Obi Toppin looks to be the best option for the Wolves. For 2020, here is what their lineup looks to be:

NOTE: Beasley was not starting with the Nuggets, so i inserted his stats with the Wolves, in all of which he was starting. Field Goal and 3 PT % are from both DEN and MIN.

NOTE: Hernangomez was not starting with the Nuggets, so i inserted his stats with the Wolves, in all of which he was starting. Field Goal and 3 PT % are from both DEN and MIN.

The wolves have the ability to pass the ball. With 2 3-pt-capable guards, 2 mid-range guys and a massive presence inside, there is no shortage of options for the Wolves on any given possession. I said in the title we were going to discuss the GM ***and*** coach portion, so here are some possible plays that the Wolves should be running,

Play: Russell has ball at the center of the 3 point line (meaning at the center of the tv screen), while KAT is at the 3 point line to the right (bottom of tv screen) and Beasley at the left (top TV screen) Hernangomez is 15 feet out, in mid-range territory. Okogie is setting a pick for KAT. Russell then kicks to Hernangomez, who steps to the right of the defender, and takes 2 steps towards the hoop. KAT is then driving in, and Hernangomez throws it up and KAT comes down with the one-handed slam, unless he gets fouled by the defender who is trying to recover from the pick set by Okogie.

Play: Russell has the ball, with all 5 scattered around the 3 point line. Russell drives in, as Beasley moves to where Russell was at (top left of the court, from TV angle) to create space. Russell then passes it to Beasley, whether it be a simple pass or a Patrick Mahomes no look pass, Beasley shoots from downtown, and my friends, Swish has entered the building.

Play: Used for Fastbreak or 2 v 1 plays. KAT has the ball. Because of his dominance, he is going to draw the opponent to him. Hernangomez is driving to the opposite side, and when the defender fully commits to KAT, KAT passes it to Hernangomez, and the fastbreak results in a commanding dunk.

The Timberwolves have a bright future. Ultimately, it comes down to how well they can execute, and how they can adjust to the new system filled with new players.