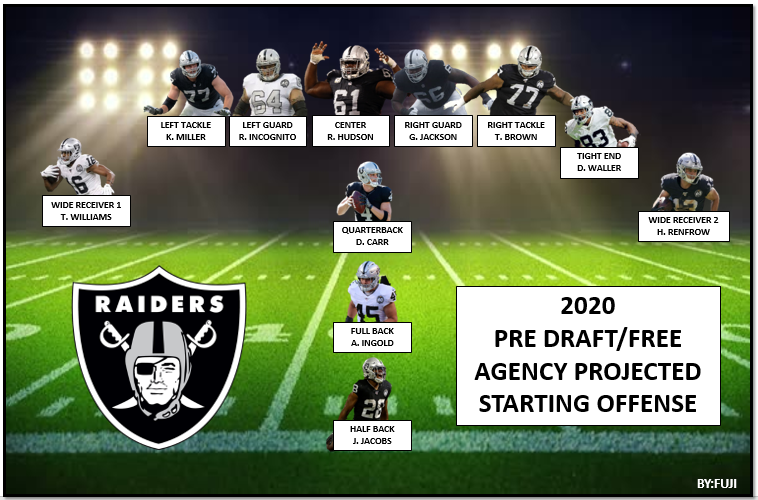 RAIDER NATION. We are now entering the post season and with both free agency and the draft approaching I want to go over some of our potential targets in offense. But before I get started, I do want to say that last year was a goddamn roller coaster. From AB all the way to the end of the season (losing to Denver by 1) last year’s team made sure that we are constantly screaming at the fucking TV. Although it was a very disappointing way to end the Raiders time in Oakland, we did see flashes of what this team can do when healthy. The Raiders finished 7-9 which was an improvement from the year before and the offense finished 11th in total yards at 363.7 ypg. To break it down even further, our passing yards per game ranked 9th at 254.4 ypg, rushing yards ranked 13th at 118.3 ypg and 3rd down conversion percentage was ranked 7th at 43.8%. Those are good numbers but where the offense failed is converting drives to points. We finished at rank 23rd averaging 19.6 points per game. Now that we have those data what’s next? Like I said earlier in this article I will go over some potential targets both in free agency and the draft to help this team improve from last year. So who do we have currently? Well I made a little graphic below on our projected starters as this time.

I believe that our biggest strength is the O-Line. When healthy this group can move mountains but its yet to be seen due to injuries. Tom Cable has done a great job moving pieces in and out as players go down to injuries. If we are able to resign or keep most of our depth the O-line is at the bottom of the priority list.  Kolton Miller and Trent Brown playing on opposite sides seems to be working and as long as we manage to keep some of our current key rotational players the O-Line should remain the same in Vegas.

Everything mostly stays the same

This group really surprised a lot of people. The emergence of Darren Waller who finished with 90 receptions 1145 yards and 3 TDs has been a delight to watch. He easily became Derek Carr’s favorite target racking up 53 1st downs for the Silver and Black. His buddy, fellow Tight End Foster Moreau also became a favorite REDZONE target finishing with 5 TDs before his injury late in the season. This core group of Waller, Moreau and Carrier will continue to be a key contributor in the Raiders future. As long as John Gruden is the head coach expect to see Double Tight ends in his game plan.

Everything stays the same

There’s really no one else to analyze in the Quarterback depth other than Derek Carr. Even though he had an above average stat line last year to include a 70.4% completion rate, he was criticized with his decision making and lack of risk taking in the air. Carr Dink and Dunked like the year before but in his defense there was really no one to throw to. With speculations of the Raiders getting ready to draft a QB or trying to sign Tom Brady, anything can happen in Las Vegas as long as John Gruden is in charge.

Quarterback Prediction: Carr remains the face of Vegas but Gruden will make a new QB acquisition to back up Carr.

Teddy Bridgewater: He showed that he can still win and be a starter in this league. Teddy may not start over Carr but he is definitely an upgrade over Glennon and Kizer. He can also challenge for a starting spot if Carr has a shaky start.

Tom Brady:  Not a big fan of this but if Gruden really likes to have Brady as his QB in Vegas, He can try to work a deal to move Carr for draft picks to give Brady more weapons.

After an excellent rookie campaign Josh Jacobs is clearly the future of the Raiders. He was exciting to watch, he ran angry, he is humble but ruthless on the field, he was everything the Nation needed with all the fuckery going on. He dealt with injuries and still managed to finish the year with 1150 yards and 7 TD’s. The Raiders also resigned Richard but he was not as productive as the year before. With Jacobs becoming the true #1 back Richard and Washington saw less involvement in the offense. All three also are very similar build and style making it a little bit harder to complement each other’s play. Richard can be a great receiving back which is probably why the Raiders opted to re-sign him plus Gruden loves running the ball. Alec Ingold was also featured in Gruden’s offense and was a key contributor to opening up running lanes.

Running back Prediction: Jacobs at 1, Richard at 2 and Gruden brings a bigger running back to help pound the rock.

Jordan Howard: We are not looking for a starting back just someone that we can use on third and short. The Raiders back are all below 6 ft. Jordan will give them that bigger frame to gain those crucial yards. His down year can also come with a cheap prize.

Lamical Perine, RB, Florida: Running back should be really low on the Raider’s draft board but for a bigger back we may be able to get Lamical Perine late in the draft or even as an undrafted rookie who knows. He played behind a struggling Gators O-Line but he made the best out of it, he is a tough runner and quality receiver. Check out his highlights here https://www.youtube.com/watch?v=rGAlzJ0dRG0

Finally, the weakest group of the offense are the wide receivers. Right now Tyrell Williams is keyed in as the #1 followed by Hunter Renfrow. Early in the Year Tyrell showed that he can be that guy but injuries slowed him down and could be a potential cut depending on how the off season goes. Derek Carr did love him some Renfrow but he’s used more on the slot meaning Gruden will be searching for a #1 or #2 really soon. The rest of the groups are young unproven talent including Keelan Doss. This position is the biggest need in offense so expect Gruden and Mayock explore the off season high and low for the next guy.

Wide Receiver Prediction: New #1, Tyrell#2 (could be a salary casualty) and Renfrow #3

Jerry Jeudy*, WR, Alabama: Amari Cooper 2.0? Just kidding Jerry Jeudy is in my opinion one of the best route runner in the draft. Jeudy can take over as the #1 receiver and will complement Tyrell Williams if he ends up staying with the team.  He was also described as “being excellent after the catch. He is very elusive in the open field with phenomenal feet to dodge tacklers, stop/start, and cut through the secondary. Jeudy’s yards-after-the-catch skills combined with his speed make him very dangerous to turn a short reception into a long gain.” (Walterfootball.com) Check out his highlights here https://www.youtube.com/watch?v=63s4E-KsPd8

CeeDee Lamb*, WR, Oklahoma: Another WR option for the Raiders. He is big and speedy. He is dangerous in space and the Raiders would love to have that weapon at their disposal. He could help the Raiders stretch the field and give Derek Carr a reliable target down range. Check out his highlights here https://www.youtube.com/watch?v=1571Ihhk65Q

AJ Green: Depending on the price AJ could be a low risk high reward type of player. Injuries had plague a once high profile receiver but taking the year off may do wonders. AJ will move in at #2 if the Raider opt in to pick up Ceedee Lamb or Jeudy in the draft. If that happens the Raiders will turn this WR corps overnight just imagine Jeudy/Lamb, AJ Green, Tyrell/Renfrow on the field all at once.

Emmanuel Sanders: Emmanuel Sanders did wonders for the 49ers this season. I don’t think they will let him walk but if they do I can see this vet suit up as the #2 receiver for the Raiders.