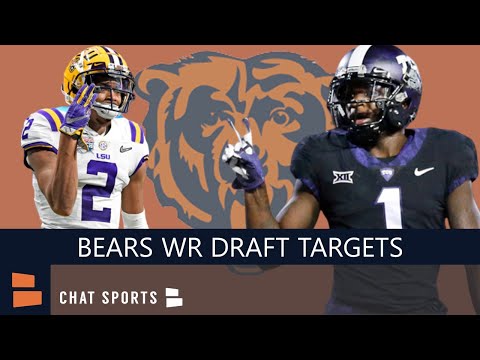 Chicago Bears Rumors focuses on the 2020 NFL Draft and the wide receiver position. Bears’ QB Mitch Trubisky needs more weapons on offense and this year’s WR class is loaded with talent. Chicago lacks a first round pick, but with two second round picks, there’s still plenty of WRs the Bears could look at and potentially draft. Chicago Bears Now host Harrison Graham takes a look at 3 wide receivers the Bears could target in the NFL Draft.

Love the Chicago Bears? Scroll up and hit the SUBSCRIBE button or click this link for more Bears rumors, news & much more: https://www.youtube.com/channel/UCaN9720mbtCGefgjo5Qkr0A?sub_confirmation=1

Jalen Reagor out of TCU is an explosive athlete who is expected to go anywhere from the late first round to the middle of the 2nd round in the NFL Draft. He would be an excellent addition for Mitchell Trubisky and the Bears as he can play slot or on the outside. Justin Jefferson is coming off a monster season at LSU which included 18 touchdowns. He’s a bigger slot player at 6’3”, but can play on the outside as well. K.J. Hill is a speedy WR out of Ohio State who could be available in the 3rd or 4th round. The Bears don’t have draft picks in those rounds, but could trade down or trade up to draft Hill.

You can watch our NFL Daily videos on Facebook:
https://www.facebook.com/chatsports