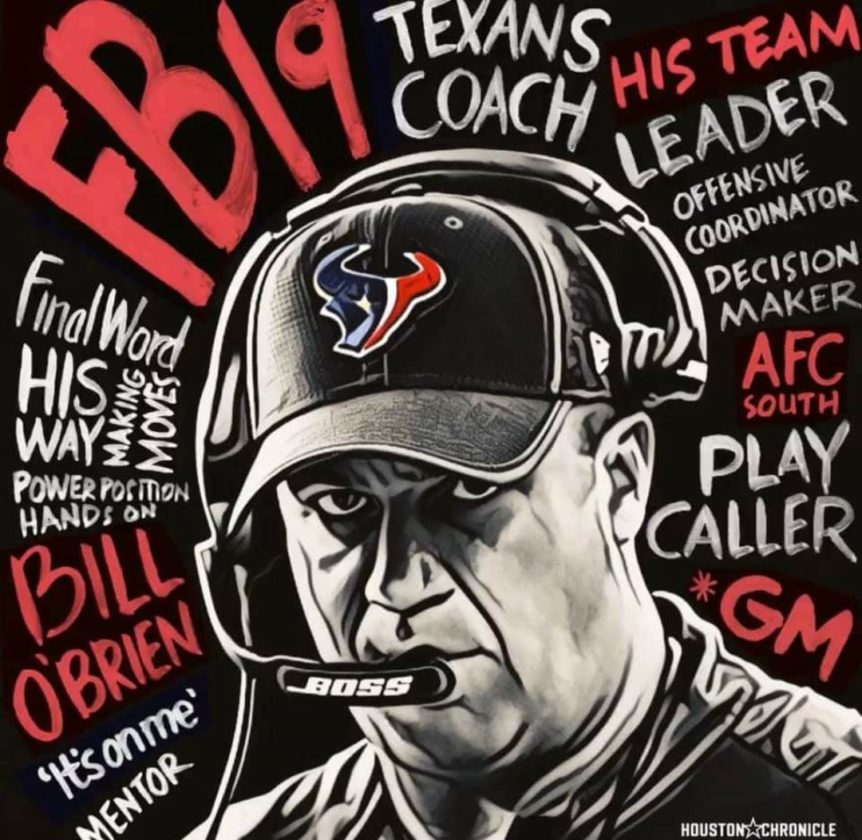 Since taking over as the chairman and chief executive officer of the Houston Texans in July of 2018, Cal McNair has not been nearly as vocal or active in team affairs as his late father, Bob McNair, was. NFL teams get two types of owners: those who let their football guys run the team; and those who meddle in every minute detail (comparatively speaking, an owner like Jerry Jones). Cal McNair appears to stem from the former category.

McNair’s lack of involvement translates to a shift in control, especially since the team has been without a general manager since the departure of Brian Gaine in 2019. Gaine was only with the Texans from January of 2018 to June of 2019 in the GM role. He previously served as the team’s director of player personnel for three seasons from 2014-2017.

Before Gaine, there was a giant rift between head coach Bill O’Brien and former general manager Rick Smith. A seemingly large portion of the fan-base seemed on board with Smith’s departure. He was often criticized for being conservative in personnel affairs. Smith took a leave of absence, in part because of the health of his wife, in 2018. In turn, this prompted the Texans to bring Gaine back for a different role and to fill the void left by Smith.

Bill O’Brien and Gaine seemed to be on the same page as far personnel during the draft and in free agency, but the union was ultimately broken by the Texans after only one season.

The recent compounded dismissal of Senior VP of Football Administration Chris Olsen, who managed the cap situation for the team the last 13 years, transfers even more authority back to O’Brien and his ever shrinking circle of confidants within the organization. One of those confidants is Jack Easterby. Easterby joined the Texans in April of 2019 as the executive vice president of team development where he provides leadership for Football Operations and the direction of organizations culture. Olsen was acting as interim GM and was half-way through a four-year extension that was signed when Brian Gaine initally took the GM position.

Bill O’Brien mentioned in the final press conference of this season that the Texans will go on without a general manager in 2020. Houston will now enter the second season of O’Brien having the ultimate sway in the direction of the organization. With yet another vacancy at the position looming for 2020, we can expect O’Brien to act as the interim GM, asterisks included.  In hindsight, this particular move could have been anticipated when looking at the tea-leaves from 2019. O’Brien’s run at GM this season proved quite successful, aided predominantly by the acquisitions of Kenny Stills, Laremy Tunsil, Carlos Hyde and Duke Johnson via trades. O’Brien the GM seems to have a current plan in place that couldn’t be carried out with his predecessors maintaining any additional levels of influence. Now with them out of the way it wouldn’t be hard to see several changes on the horizon for Houston with B.O.B. in full control. The dominoes have already begun to fall.

Romeo A. Crennel, in one way or another was just retired by Pat Mahomes. The second defensive coordinator Mahomes has seemingly run out of the business this post-season; the other being Dean Pees of the Tennessee Titans. In his last press conference O’Brien stated that he expected Crennel back with the team; although, he did not mention in which capacity Crennel would return. That was a vague hint that RAC would no longer manage the defense for Houston in 2020, which also coincided with the defensive coordinator’s expiring contract. Crennel had similarly stepped aside in 2017 so that Mike Vrabel could take control of the defensive play-calling in Houston. Crennel only returned after Vrabel’s departure to coach Tennessee in 2018. With Crennel no longer overseeing the defense, O’Brien would need to find a replacement. Rather than bring in someone from the outside, B.O.B. opted to promote Anthony Weaver from within. The promotion was seemingly just hours after the Crennel announcement. Weaver spent the last three seasons as the defensive line coach for the Texans and is now the third different coordinator for Houston since 2014.

Weaver’s former team mate, Seth Payne, had this to say,”(Weaver) had a grasp of the defensive philosophy. Used to love hearing him talk about the way Rex Ryan ran the Ravens defense. There is zero BS with this guy. Players respect that”. Weaver has been instrumental in the development of Texans defensive lineman Angelo Blackson and D.J. Reader in recent years, and helped Jadeveon Clowney reach his first Pro Bowl as his position coach in 2016. Houston’s thought process is that Weaver could potentially be a head coach somewhere else, much like the Mike Vrabel scenario, and so the promotion was warranted from a retention standpoint.

Regardless of all that, the team will now need to replace their defensive line coach. Lets not forget that John Pagano was just recently dismissed as well, so Bill O’Brien will now need to also replace the outside linebacker coach. The coaching staff is still being evaluated by Jack Easterby and Bill O’Brien. Both are obviously aware they are in need of a few new hires, but other changes in coaching and player personnel will surely to follow.

The defense was clearly a weakness this season for Houston, as displayed against Kansas City a week ago. In particular it was the secondary who suffered the most without the services of safeties Kareem Jackson and Tyrann Mathieu this season. The Texans shuffled their island of misfit defensive backs around, which ultimately led to a disjointed group that consistently played extremely inconsistent. Meanwhile, Johnathan Joseph didn’t get any younger and the team acquired Gareon Conley and Vernon Hargreaves to essentially replace him should he decide to retire or move on. Bradley Roby will most likely be lost in free agency due to Deshaun Watson and Laremy Tunsil being in line for massive extensions. Safety Jahleel Addae will also test the market in free agency due to Houston’s lack of cap room. The team’s flimsy draft pick stockpile will force them to seek defensive back help in cheap free agency pick ups or through the practice squad if unable to secure a late round gem much like they did with their first overall pick in third round a few years ago when they selected safety Justin Reid.

The best news for the defensive unit was they were good against the run when J.J. Watt was healthy, but they were near dead last when he was not. When partnered with Whitney Mercilus on the field both enjoyed success. Mercilus secured a four-year, $26 million contract extension this season and both he and Watt will anchor the pass rush group, which will be vital should Houston not retain nose tackle D.J. Reader with an extension or franchise tag.

Houston will undoubtedly continue to reconstruct the front office and coaching staff to fit Bill O’Brien’s vision. O’Brien the GM was praised, while O’Brien the coach and play-caller has received mixed reviews. The talent has improved, but the Texans’ post-season struggles have continued. O’Brien’s revisions in personnel this past season has given his young quarterback some extra protection as well as a few new weapons to play with. The offensive line was much improved with the two draft picks in Tytus Howard and Max Scharping, as well as the anchoring of the left tackle position with Tunsil. With those plans now breaking past the infancy stage it is time to see them flourish and place major focus into grooming the defensive side of the football for success. Defensive line and outside linebacker coaching vacancies will have to be filled in the near future, but many on the outside are clamoring for a true offensive coordinator as well. Only time will tell if B.O.B. is willing to share the load, and there are certainly some prospects to consider for the position if he so chooses. It will all play out over the course of this off-season, but given what has already transpired it’s hard to see O’Brien straying from a totalitarian approach when making decisions for his football team.