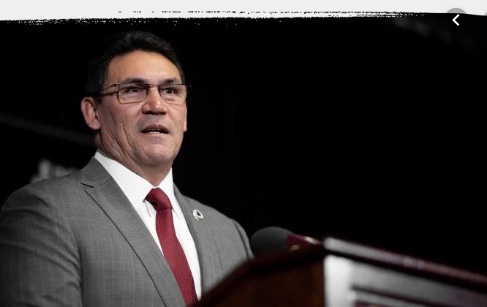 The Redskins have started a new era by hiring Ron Rivera and firing Bruce Allen.

Ron Rivera also brought in Jack Del Rio as his defensive coordinator. Rivera is a two time Coach of The Year winner and won the NFC South 4 out of 8 times and took the Panthers to the Superbowl in 2015. Ron Rivera is a highly respected coach who will instill discipline and hard work into this Redskins team.

The Redskins have a very talented defense that just couldn’t put their pieces together to become an elite defense. The Redskins have a bunch of young talent including Jonathon Allen, Dar’ on Payne, Montez Sweat, Matt Ioannidis, Landon Collins, Quinton Dunbar, Rueben Foster, Cole Holcomb, and Jimmy Moreland. The Redskins also hold the second pick in the 2020 NFL Draft, where they will presumably take Chase Young with the second pick. With help from Ron Rivera and Jack Del Rio, this defense could become a top ten defense or better next year.

In 2002 in his first season as the defensive coordinator with the Panthers, Jack Del Rio took the Panthers from the worst defense in the league to the 2nd best defense in the league after just one year! He also took over as the defensive coordinator for the Broncos in 2012 and brought them from the 20th ranked defense to the 2nd best defense. Del Rio has proven to turn around talented defenses very quickly and could do the same with the Redskins. Ron Rivera and Jack Del Rio will combine to be a great defensive duo.

This is a move that will make the Redskins competitive and respectable again. Ron Rivera was coaching when Cam Newton was a rookie and helped develop him. Ron Rivera let Cam Newton be himself, which helped Newton feel more comfortable. Dwayne Haskins just completed his rookie season and finished the year off strong, but still needs to show consistent performances to show that he is a true franchise quarterback. Ron Rivera says he believes Dwayne Haskins can be a franchise quarterback but that it could take time.

In Ron Rivera’s press conference linked here(https://youtu.be/ps-_Rd-WQDA) he talked a lot about being all about the players and the players working together as a team, instead of one individual trying to do it all on his own. Ron Rivera was asked why it will work out in Washington, and Rivera said, “I believe in me, and I’ll bet on me. And we’ll see what happens.” Ron Rivera wants to instill a new culture in Washington and wants to center it around the players. Ron Rivera will also have a lot of control and will be able to choose personnel, and possibly even front office people.

The one final question is, will Kevin O’Connell be brought back as the offensive coordinator. O’Connell and Dwayne Haskins have formed a tight bond, and a young quarterback needs to have consistency. If O’Connell is brought back, the Redskins will be moving in the right direction and will possibly be competitive and respectable again for years to come.