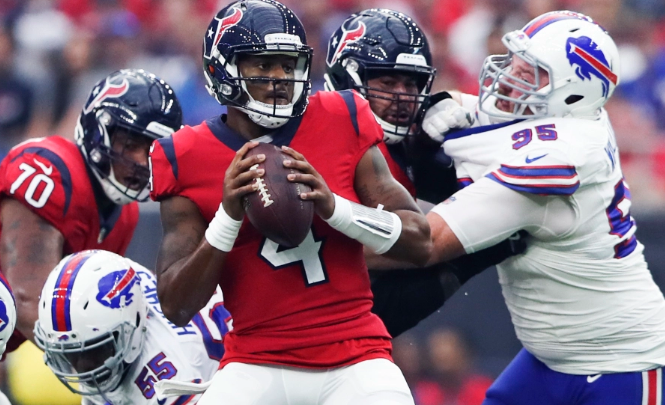 The NFL season finale in week 16 left Texans head coach Bill O’Brien with the situation of choosing whether or not to play several of his starters. After seeing the results from the early slate of games on Sunday, O’Brien made the “tough” decision to sit well more than a handful of players in game that would have absolutely no impact on Houston’s playoff seeding. With the Patriots losing, and mainly the Chiefs securing a win, the Texans were locked into the 4th seed in the AFC playoff picture, regardless of the outcome in their contest with the Titans. On the positive side for Houston, numerous reserve players got plenty of experience reps versus the Titans, including WR DeAndre Carter, RB Taiwain Jones, CB Lonnie Johnson, WR Keke Coutee and of course A.J. McCarron in at QB for Deshaun Watson.

The Texans were unable to stop Tennessee in their quest for a playoff birth, allowing Derrick Henry to take home the league’s rushing title in the process. In reality, Houston escaped with no additional injuries, other than a Jonathan Joseph hamstring issue, and no further skin off their backs. Houston quite possibly did the rest of us a favor in bumping the likes of the lowly Oakland Raiders and Pittsburgh Steelers out of the playoffs. Tennessee at New England is much more enticing for television.

With the regular season in the rear-view mirror for Houston, their focus now turns to the 5th seeded Buffalo Bills, who will come into NRG Stadium on Saturday afternoon looking to bounce the Texans in the first round of the playoffs for what would be the second time in as many years. The Texans were embarrassed at home during the Wild Card round versus the then Andrew Luck led Colts this time last season. Bill O’Brien was adamant on Monday’s press conference that this years team is different than last year, as obviously the Texans will face a different opponent, in a different year, with a different team make-up. One of the subtle yet main differences will be the experience level of Deshaun Watson, who has proved to be an intelligent student of the game and fierce competitor.

On the other side of the football, O’Brien touched on a well coached and disciplined Buffalo team, which he continuously showered with compliments during the presser. B.O.B. praised cornerback Tre’davious White as one of the best defensive backs they will face this year, and added that former Texan, Kevin Johnson, had been not only healthy, but playing well on defense and special teams for Buffalo.  That will be a situation to monitor as Buffalo’s starting corner, Levi Wallace, exited week 16 with a non-contact (right ankle) injury suffered on an interception. Johnson will likely play in Wallace’s place if the starter can’t go, something to keep in mind if Houston’s Will Fuller (groin) is somehow healthy enough to play. O’Brien mentioned that Fuller was heading in a “good direction” and progressing well, but was entirely unsure if he will be well enough to suit up this week. Staying in that same vein, B.O.B. stated that J.J. Watt will continue to “build on reps” from last week’s practices, and that his availability will continue to be a daily evaluation leading up to Saturday.

Texans History Versus the Bills

Since 2014 Bill O’Brien has won 4 AFC South titles and has appeared in 4 playoff games as Houston’s head coach. He is 1-3 in those games and has lost by a combined 62 points. His only win in the post season came in 2016 when the Texans beat a depleted Oakland Raider team in the Wild Card game. Houston won 6 AFC South titles this decade, second most in the league, only behind the New England Patriots (10).

Tre’davious White will shadow DeAndre Hopkins. White is a 2019 Pro Bowler who has accumulated 6 interceptions this season, he has also forced two fumbles and registered a sack in the process. In coverage White is one of the best, allowing only 45 receptions on 91 targets which translates to 49.5% completion percentage. Opposing quarterback passer rating when targeting White is a lowly 44.5 and he hasn’t allowed a receiving touchdown in coverage all season. White will have his hands full with arguably one of the league’s top receivers in Hopkins as he boats a 69.3% catch percentage this year and was once again named to the Pro Bowl. The 4x Pro Bowler and 2x All Pro will look to keep his streak of no less than 5 receptions a game going into the playoffs.

Josh Allen vs. Deshaun Watson: Guess who Russell Wilson is tied with in 2019 for the most game-winning drives (5). Answer: Josh Allen and Deshaun Watson. It would be an understatement to say each team’s respective signal caller has played well this season, exceptionally well, now that’s more like it. Allen has showed improvement in ball security and his passing metrics from the season prior; meanwhile, Watson has led his squad to a second straight division title and consecutive 10 or more win seasons. Let’s see how these two and their teams stack up by the numbers.

Tale of the Tape

Mobile Quarterbacks on the ground

The Vegas line has the Bills opening up as 3 point underdogs on the road. This game is currently sitting at a 38.5 over/under and could very likely hit the under considering how tough Buffalo’s defense is in conjunction with their offense that averages less than 20 points a game.

Houston’s blow up potential hinges on the delicate leg muscles of Will Fuller, who was said to have a groin injury that would take at least 3 weeks to heal. If Fuller is healthy and starting CB Levi Wallace is out, then the Bills could have trouble matching up with the likes of Fuller and team mate Kenny Stills. With J.J. Watt set to return, the Texans would get an overall defensive boost, especially in the pass rush.

The Bills also failed to knock off divisional foe New England in two contests this year, an opponent the Texans vanquished just a few weeks ago. For the Bills, their defense will travel and most likely cause several fits for Watson and company. On the other side of the ball, the Bills may choose to exploit Houston’s uncanny ability to allow running backs to have massive days receiving the ball out of the backfield. Devin Singletary is only averaging 12.6 carries, so it would be beneficial for Buffalo to get him involved in the passing game. Much like Watson, Josh Allen’s ability to extend plays with his legs will be a test for Houston’s linebackers and defensive front. Allen is big and physical QB who has shown he is not afraid to impose his will in short yardage situations.

Expect another close battle in what will be a surprisingly more entertaining contest than most casual fans anticipate.