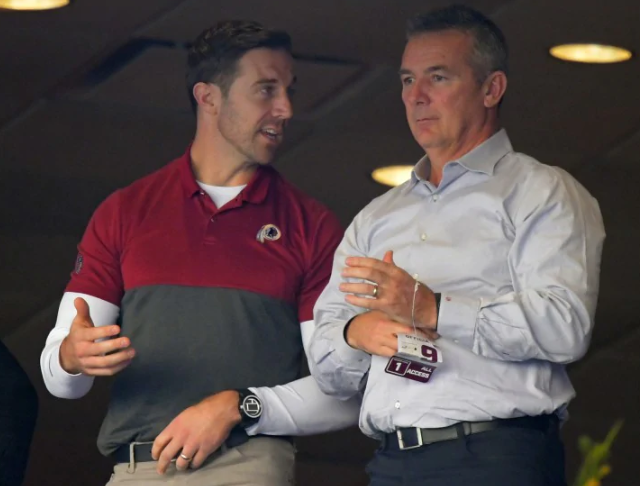 The Washington Redskins have one of the most important offseasons in franchise history with both the Head Coach and GM positions in question. The Washington Redskins will need to hit on the right head coach to develop Dwayne Haskins and get this team back to the promise land. The Redskins have a few young attractive pieces on offense including Dwayne Haskins, Terry Mclaurin, Derrius Guice, and Steven Sims. One factor in getting a head coach to come to Washington is if Washington elects to fire Bruce Allen. If the Redskins fire Bruce Allen Washington will become a much more attractive head coaching job. There have been a few names that have been circling when it comes to the next Redskins Head Coach including Urban Meyer, Ron Rivera, Marvin Lewis, Eric Bieniemy, Robert Saleh, and Greg Roman. The Coaches that seem to be the front runners to get the job are Urban Meyer, Ron Rivera, Marvin Lewis, and Eric Bieniemy. A few Redskins sources have said that the Redskins will hire Urban Meyer on Monday right after the season ends.

This is unlikely to happen because normally teams interview a few candidates before hiring their head coach, but you never know Dan Snyder could end up making his splash move and hire Urban Meyer. Urban Meyer would be a great person to develop Dwayne Haskins since he coached him at Ohio State, and that was when Dwayne Haskins finished as a Heisman Finalist. There have been a few rumors going around that Washington is interested in hiring Eric Bieniemy. The problem is that Bieniemy is in a great situation in Kansas City and might not want to leave. Bieniemy has helped develop Patrick Mahomes and could do the same with Dwayne Haskins. The front runner for the job seems to be Ron Rivera. Rivera led the Panthers to a Superbowl in 2015 and is a great defensive mind and can help turn Washington’s defense into an elite defense. The Redskins defense is one of the most talented in the league, but they have one of the worst and under-qualified defensive coordinators in the league. According to reports, Rivera expects to get a Head Coaching deal done very quickly after the season. Marvin Lewis is another coach that Washington has been very interested in and could hire. Marvin Lewis never won a playoff game with the Bengals, but lead them to 6 ten win seasons. Lewis could help instill a culture in Washington and get them back to being competitive. Ultimately, Ron Rivera seems to be the coach that Washington will hire. If Ron Rivera gets hired, lookout for the possibility of him bringing in Marvin Lewis as his Defensive Coordinator.