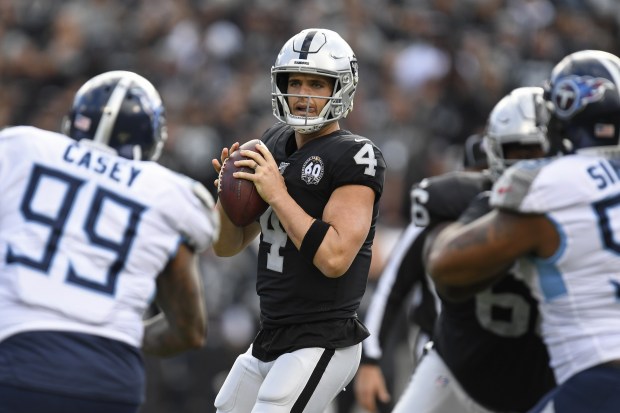 The Raiders took a devastating loss for the 3rd time against the Titans. Just 4 weeks ago, this team was on pace to make the Wildcard and was even in contention to win the AFC WEST. The last three weeks was a great gut check and a clear indication that the Raiders are not quite ready to be a playoff contender. The Raiders has been outscored by their last three opponents 116-33 and given up 1,212 total yards within that stretch. The Jets, Chiefs and most recently the Titans has their way against this team and on this article, I’ll go over what may have caused the Raiders 3 weeks of embarrassment.

Injuries finally takes a toll on them

The Raiders have been shuffling through its depth chart since week 1 when starting safety Jonathan Abrams went down with a season ending injury. I understand the Raider’s are not an exception as every team in the league goes through this shit. However, the injuries happen as soon as the Raiders seem to head the right direction. The players mentioned above are by no means superstars, but they are key players for this team. All year long the Nation watched Mayock and Gruden sign and release players trying to patch up the roster. Some weeks it worked but the last three weeks was just horrible both on offense and defense. The receiving corps was completely depleted and once again we were relying on the Tight ends to be our main targets. Jacobs and big Trent not playing also limited the run game which has been one of the Raiders strengths. At this time, there’s no reason to rush these guys to compete, the staff must give them time to heal and get ready for 2020.

This has been an ongoing issue for the Raiders since forever ago. This year the way in which the penalties are affecting momentums whether its negating a touchdown, interception or 1st down is very frustrating to watch. Knowing the team’s current status and the lack of game changers in this team, the Raiders must work extra hard to score points or prevent the other team from scoring. This was evident in the Chiefs game where we couldn’t get a break and penalties prevented Oakland from moving the ball. Not making these mistakes is very important to us because the secondary gives up ridiculous amount of yardage to every quarterback that they play against. As mentioned above, missing both starting safeties hurt and the current replacements as well as the DBs are getting destroyed every week. Penalties and huge yardage through the air is something the Raiders must overcome in order to compete in this league. Pat Mahomes, Rivers and now Drew Lock can eat up yardage and score 3-4 touchdowns quickly and these errors must be minimized for the Raiders to complete their transformation.

I was worried when Gruden pulled him against the Jets. It really felt like they gave up on him and the next couple of games didn’t help. To be fair Derek does not have the same weapons he had earlier in the season. Tryell Williams has not been the same guy, ol reliable Hunter Renfrow is potentially out for the season and Jacobs did not play against the Titans. Carr needs a healthy supporting cast in order to fully thrive as a QB. I still don’t think Gruden will replace Carr because for one he’s a safe QB and he showed flashes that he can compete at a high level. My main issue with Derek is that he is way too conservative. Gruden needs to grill Carr to take chances and use his legs more often. Carr is athletic enough to extend plays but he is scared to take those risk. This is the reason why Derek Carr will never reach his full potential and will be known as an average QB that had potential.

The rookies have peaked and burnt out

It’s great to see that Oakland hit a homerun with this year’s draft class. Everyone was asked to step up very early and boy are we proud of what they’ve done so far. Jacobs, Hunter, Ingold and Moreau headlined the offense and Ferrell, Mullen and Crosby were for the defense. They contributed whenever they could and was the talk of the town week over week. But one by one they went down, the lack of depth in each position asked a lot from this guys that some played through injuries. The Raiders needs to find a way to rejuvenate this group because they could be special.
Overall, I believe the Raiders lost their chance to make the playoffs. The Titans and Steelers only needs to win one game out of the last 3 in order to make the wild card spot. The Raiders on the other hand must win all three and with 2 divisional games left this seems to be very unlikely to happen. It would be great to see a miracle where the Raiders hold the last playoff spot but based on their most recent outings the Raiders have a lot of work to do in completing this roster. The offense is tolerable and has potential, but the defense is just ugly. This year was still somewhat a success in my opinion because we have a lot of scrappy young guys and that’s good for a team that’s trying to build resiliency within the organization. Gruden’s year three to me is the defining factor of how he is as a coach. At this time the roster should be in his image and we will see all the Khalil and Amari picks in action. The future is bright and for that I am excited. I’m just disappointed because we had the opportunity to leave Oakland as a winning team instead we its another year of wait and see.