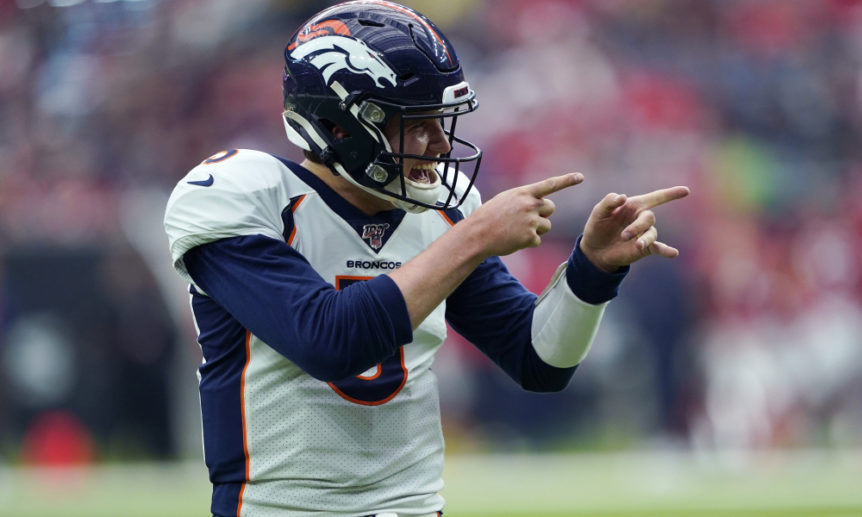 John Elway, former champion QB for the Broncos and now current president of the Broncos has been criticized I would say, unfairly for his inability to draft QBs. Now, we did debate this topic on Rumboyz After Dark which airs 9PM EST every friday night. We debated it and I was of the opinion that “John Elway has earned plenty of failure” and that even if the man drafts 5 more bad QB’s he still has done enough to keep his job. Now do I think that Paxton Lynch was a good draft choice? No. Brock Osweiler wasn’t great either but they did win a Super Bowl with him and Peyton.

Now Elway, has done everything for the Broncos franchise, and drafting Drew Lock may be the most recent thing he’s done to help the future of the franchise. Now is Drew Lock as Superstar? No. Is he going to dominate the league? I don’t believe he is, but he is contributing to wins during a season that Broncos fans had all but given up on.

After Joe Flacco got hurt, Drew Lock has come in these last 2 games, winning both of them, making him the first QB in Broncos history since John Elway to win his first 2 career games.

He did so in an efficient and effective fashion, posting 134 passing yards with 2 touchdowns and an interception against the Chargers. Then, Lock followed up his decent performance with a blowout victory against the Houston Texans who may be Super Bowl contenders. Lock posted 309 yards passing, with 3 touchdowns 1 interception and a 136 QB rating.

Now as I said, these stats are not that impressive, they are not eye popping. But watching the tape of the Broncos with Drew Lock at the helm, you can see the energy the team plays with. Guys run a little bit harder, guys block a little bit longer, and the team seems to enjoy playing football when Lock is their QB. I don’t know if Lock is the future of Denver football but he’s a better option with more potential than Case Keenum or Joe Flacco. Lock is someone you can build chemistry with, and potentially bring the team to a winning record again if he’s given the right parts.

Should the Broncos still draft a QB? Yes. Worst case scenario, the QB doesn’t workout and you’ve given Lock someone to compete against and gain confidence. Best case scenario you have two viable QBs that you can work with going forward.

Next time you Broncos fans complain about John Elway, I will continue to remind you that the Bears haven’t had a QB, really ever. Plenty of franchises haven’t been able to find that QB, and before crapping on the guy who has brought the Broncos their only Super Bowl success, make sure you understand how lucky you really are to have John Elway.