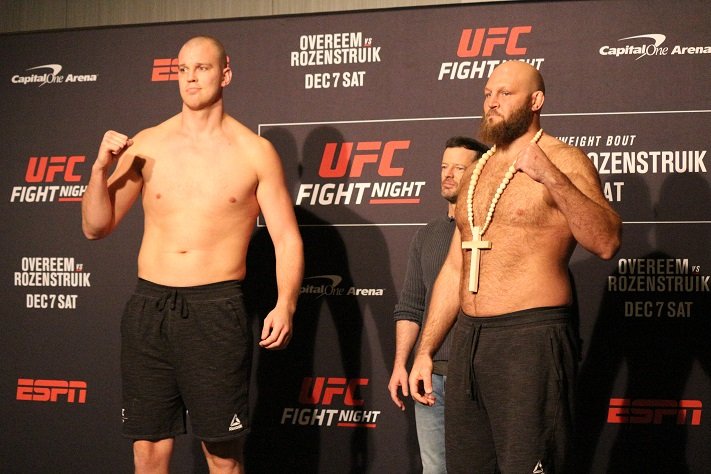 Regardless of who the audience was rooting for in the fight the end result was disappointing in this Maincard bout at UFC ESPN 7. In the the 1st round a groin shot was delivered by Rothwell and the maximum 10 minute recovory time  taken by Struve to recover. During this recovery time the fans began booing Struve pressuring him to continue the fight. Struve tried to get up and received cheers before sitting back down where he felt more comfortable. Eventually Struve recovered and continued too close out an apparent 10-9 1st round advantage.

The second round was also going Struve’s way until the second half of the round Struve took another groin shot. This time it was referee, Dan Miragliotta covering his microphone pointing out that Struve was in control of the fight and if he were to quit it would be ruled a no content. A referee is not supposed to comment on the scorecards of a fight, but Miragliotta’s opinion on the scorecard convinced Struve to continue after taking the 10 minute rest. Rothwell was deducted a point, but came back with fury knowing he was potentially down 10-8 in the 2nd round. Rothwell finished a weakened Struve by KO/TKO with just 3 seconds left in the round. Is the point deduction a strong enough punishment considering the advantage Rothwell gained from the 2 illegal strikes? If the punishment should be greater what do you suggest it should be? -Jake Miller Rumboyz.com