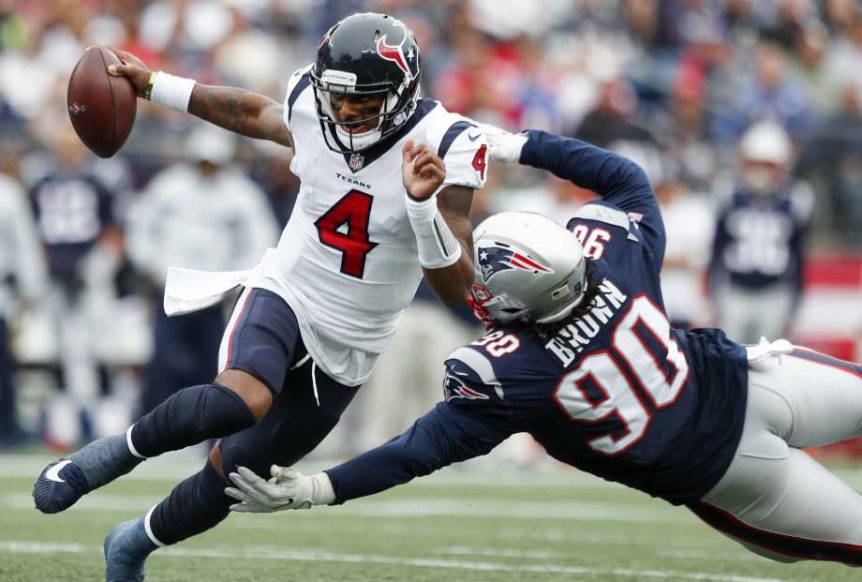 The Texans will benefit from a “mini-bye”  fresh off a slim 20-17 home victory over their divisional foes, the Indianapolis Colts. Indy forked over their lucky horseshoes in a game that saw a Fairbairn field goal attempt doink its way in, two nuclear DeAndre Hopkins touchdowns, two egregious T.Y. Hilton drops, and one end-of-game fumble that could not be challenged. When the dust had settled the bulls had bested the colts and taken control of the AFC South, thanks mostly in part to the passing game and the return of Will Fuller. Head coach Bill O’Brien opted to give his charges a few days off instead of pulling the team back in for some extra sessions ahead of another difficult matchup.  The win on Thursday was vital for the Texans, but more importantly, they got some extra time to recover after playing two games within a 10 day span.

The Patriots were able to hold off Dak Prescott and company in a home game that nearly saw more dropped passes than points. The 9-13 victory for New England didn’t come without it’s criticism, predominantly of the officials, in what many are now claiming were phantom tripping penalties charged to the Cowboys offense. Late game penalties and sloshy weather aside, the task would have arguably been just as daunting for the Cowboys. The Patriots defense has been one of the best in the league up to this point and they held Prescott to 212 yards passing and an interception on 33 attempts. Ezekiel Elliott failed to reach 90 yards rushing on 21 carries, although he added 4 receptions for 40 yards through the air, and Amari Cooper did not register a catch. The Dallas high powered offense was left idling, having only scored 3 field goals on the day. New England is second overall in total team defense and has carried all season, but their offense has sputtered along, doing just enough to secure victory after victory.

New England sits alone atop the AFC and are in prime position to lock down home field advantage for the playoffs. Heading into week 13 they will be tested against one of the NFL’s top ten (7th)  total offenses in the Houston Texans. Can New Englands defense stop Deshaun Watson and company on the road, or will the Patriots somewhat commonplace offense (16.7 PPG the last 3 weeks) be forced to keep up with the Texans? Houston has all but secured a playoff spot after besting divisional foe Indianapolis on Thursday Night Football. Houston has an 89.7% and 74.5% chance to make the playoffs and win the AFC South respectively.  A win against New England would help to bolster confidence for a somewhat inconsistent Houston team down the home stretch into the postseason, while the Patriots would inch closer to locking down a first round bye by defeating the Texans.

While the Houston Texans were finding their way as an expansion team in 2002 (no winning season until 2007),  the New England Patriots were in the early stages of building a dynasty.  New England is 10-1 all time against Houston, including two AFC divisional playoff games. The Texans only win came all the way back in in the Gary Kubiak era, when the 2010 Matt Schaub led group escaped with a 27-34 regular season home win. Under Bill O’Brien the Texans are 0-5 against the Pats since 2015.  Houston has only hosted 4 games all time, the last ended up in a 27-6 trouncing. To be fair to O’Brien, he was forced to rely on the “talents” of signal-callers like T.J. Yates and Brock Osweiler until Deshaun Watson was drafted in 2017. Below are the final results for games in the O’Brien era:

While Watson has yet to produce a win in his two career starts versus the Patriots, he has at least given his team an opportunity to pull off a win in both contests. Now Watson gets to face-off against arguably one of the best defenses in the NFL, and Tom Brady, for the first time ever at home in a prime-time match-up hidden away from the elements.

Stephon Gilmore – Glomore has been lights out for the Patriots all season and can easily be called the league’s best cornerback up to this point. He suffocated Amari Cooper in coverage on 26 of 33 routes run, allowing only two targets and zero recptions while also picking off Prescott once in the process. Gilmore has four interceptions on the season and faces probably his toughest test yet in DeAndre Hopkins and the Texans impressive arial assault.

Tom Brady is setup well in this matchup as he faces a Texans defense that is giving up the seventh most fantasy points to the quarterback position. Houston has had five instances in which they have allowed a passer to complete three or more touchdown passes in a single outing. Brady has been on the decline over the last two months as his numbers would indicate. The patriots are extremely short in the pass catching department and it shows as Brady has only two games in which he has tossed multiple TDs over that last eight weeks.

DeAndre Hopkins – In week 12 Hopkins had his first multi-touchdown game since week 1 versus the Saints. Nuk went nuclear, posting 6 catches for 94 yards and two scores. He has been in the zone, making trips to the paint in three of his last five games. He’s in a rough spot this week versus the lockdown corner Stephon Gilmore. This will definitely be the matchup to watch as it will likely influence how the Texans will try to attack the Patriots defense thoughout the course of the game.

Will Fuller – Fuller has had a long weekend to take care of his hamstrings. In his first game back from the multi-week injury Fuller exploded for 7 catches for 140 yards on 11 targets. His health is imperative to the Texans success on offense as he offers a ceiling unlike nearly no other receiver in the game. The downside is his floor is basement dweller level, especially in tough matchups. At this point it is unknown if Patriots cornerback Jason McCourty will be available for the Sunday night tilt, as he is currently dealing with a groin injury that prevented him from being active against the Cowboys. Fuller’s floor rises if McCourty is forced to miss another game.

Deshaun Watson – Watson will again need to be magical in his performance in order to lift his squad above the gold standard in the AFC. After struggling mightily against Baltimore just a week before, Watson bounced-back hard as he got the deep ball going early and often versus the Colts. Both Hopkins and Fuller were able to blow by defenders and haul in huge chunk plays, two of which hit paydirt. So long as Watson can stay upright, he will give his team the opportunity to stay in the game and hang with the big boys. Watson hasn’t done much on the ground over the last two games. He’s also turned the ball over more often than fantasy owners would like as of late, but his history against the Patriots has proven that he is more than capable of getting the job done. Watson will have to turn it up a few notches if he wants to finally get a win this time around.

The Patriots open up the betting odds as -3.5 favorites on the road. We can expect New England to continue to try and run the ball and play to their strengths. New England boasts a defense that is +19 in turnover differential and Watson has been somewhat wreckless with the football recently. The Pats will continue to be the safe bet as they have won 9 of their last 10 versus the Texans and are 9-2 against the spread all season. That includes a 5-1 record ATS on the road this year. Meanwhile the Texas are just 1-4 ATS in home games. The only glimmer of hope for the Texans would be for Deshaun Watson to have a Lamar Jackson-like game, slicing and dicing both through the air and on the ground in order to keep this contest close. When it’s all said and done, Vegas always seems to know more than we do. Unless the Texans self-implode, like they did in week 11, I’d bet on a one-possession game that will be decided in the final moments.

The Texans lost LB and their leading tackler on special teams in Dylan Cole to a torn ligament in his knee on Thursday night vs. the Colts. He has been placed on IR and is done for the season.

Patriots WRs Mohamed Sanu (ankle) and Phillip Dorsett (concussion) are both hopeful to return, which would relegate bench duties to rookies Jakobi Meyes and N’Keal Harry.