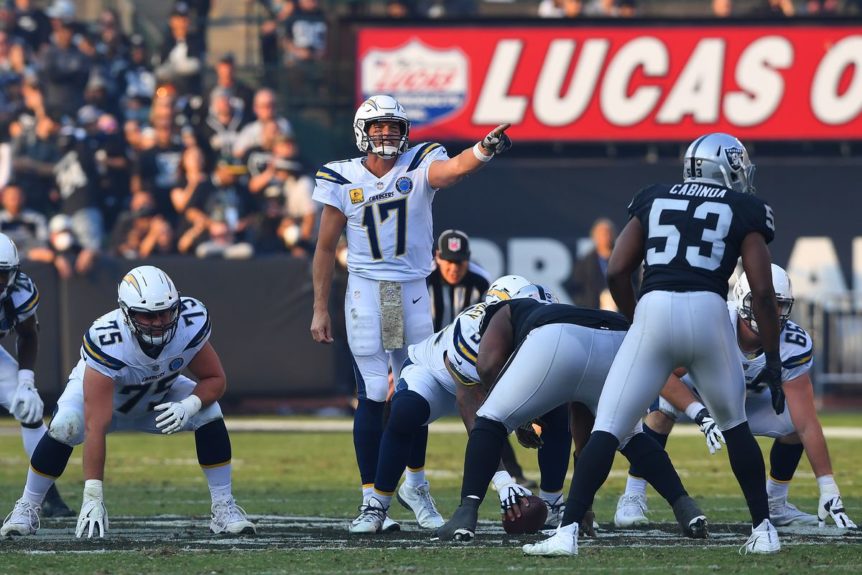 OAKLAND, CALIFORNIA. The Raiders secured another win in front of their home crowd by beating the Los Angeles Chargers 26-24. After coming from a very impressive win against the Packers most sports analyst picked the Chargers to win the game. The Raiders on the other hand had different plans for the night and continue to make people eat their words after surpassing their win total from last year. I know beating 4 wins isn’t really that hard but the fashion in which the Oakland Raiders did it is surpassing everyone’s expectation. In this article I will go over takeaways from the Raiders Thursday night game as well as the events that led to this 5-4 team.

Derek may not be putting ridiculous numbers on a weekly basis but he is quietly putting together impressive stats across the board. One can only imagine how Antonio Brown could have made this numbers pop even more but without him Carr has made it work. In nine games Carr has thrown for 2202 yards, 14 Touchdowns, 4 Interceptions. He also has an impressive 70.8% completion rate and a QB rating of 104.4 per theScore APP. Carr moved around the pocket and orchestrated a scoring drive late in the 4th quarter helping the Raiders secure a back to back win. Derek was emotional after the game and who wouldn’t be specially after going through all the changes in his 6 years with the Silver and Black. He finally feels comfortable in the offense and he is surrounded by unselfish players who cares about the team.

The Rookies came out to play

On the offensive side, Rookie of the year candidate Josh Jacobs had a quite night but was able to score a game winning TD late in the fourth. He finished the game with 71 yards 1 TD, 3 receptions/30 yards. Jacobs now has 811 yards and 7TDs for the year, he has continued to be a force in the run game and the Raiders has to be really happy with this pick (MACK trade). Hunter Renfrow and Alec Ingold also came through tonight. Ingold had a 9yard TD catch from Derek Carr and Renfrow gained important first downs late in the game. On Defense, Clelin and Maxx led the pass rush who made Philip Rivers uncomfortable all night. This was the best game of Clelin’s rookie season and giving him 3.5 sacks for the year. The future is bright for this rookies, the Raiders have ask them to mature immediately because of all the adversity the team has faced. This is the guys Gruden and Mayock has been telling everyone about and its good to see that they are producing and heading the right direction.

For one night, I give Erik the nickname Primetime. He finished the game with 2 picks (well 3 if the endzone INT didn’t get called back) and a Touchdown. Erik was all over Rivers and in the first half seemed like the only target he threw to. The pick 6 was especially important because it gave the Raiders much needed points to stay with the Chargers who almost came back to steal the game. Erik has a pretty good story leading to his NFL career and I’m glad he is part of this team full of GRUDEN GRINDERS.

Oakland Raiders is starting to overcome all the shit storm

The creation of this team has not been easy. The organization faced so much adversity and criticism from the whole world. ESPN and other sport analyst would make fun of everything the Raiders do and called them dysfunctional throughout the offseason. In their defense, the Raiders has been a laughing stock because of its never ending rebuild and bad acquisitions. This year, Mayock and Gruden have created a new regime and most people was not buying into it. 10 weeks in to the season and I couldn’t be prouder of what this team has accomplished. To those who don’t who don’t know what this team had to go through so far.

Below are some events that occurred leading to today’s Raiders.

*John Gruden signed as head coach – People criticized him for being away and not knowing today’s game.

*Have a hard schedule

I can go on and on but I have to give the credit that’s due for this team. They have come together and do something good after getting put right in the middle of a shit storm. This team has a lot of upside and they seem to have a lot of fun playing together. The rest of the schedule gets easier and the next 2 games are against the Bengals and the Jets. The Raiders have the opportunity to string together a 4 win streak that could help them claim a spot in the playoffs. We have 7 games left in the season and things look good for the Silver and Black. JUST WIN BABY!!!!