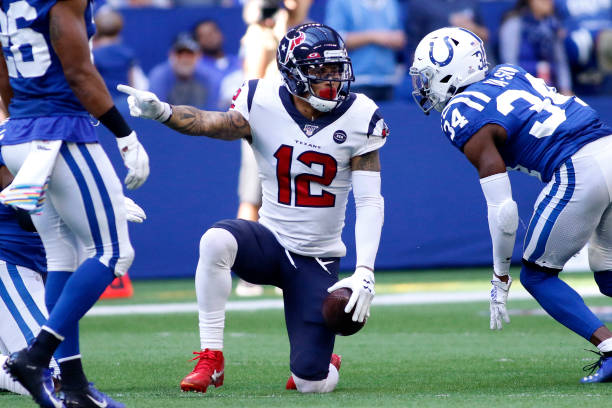 How many dollar bills did your league drop on Kenny Stills?

As one of last week’s hot waiver wire pick-ups, Kenny Stills will step up as Deshaun Watson’s number two target this Sunday when the Houston Texans (4-3) face a horrendous Oakland Raiders (3-3) secondary that just gave up 429 yards and 5 touchdowns with no interceptions to Aaron Rodgers and the Green Bay Packers. Keep in mind Rodgers was without star wide out Devante Adams, and two other Packer receivers barely got medical clearance to participate in the week 7 blowout. The Raiders will also now be without the services of corner Gareon Conley, who they traded earlier this week to the Texans of all teams.

If you are unfamiliar with Stills, he splashed onto the scene in week 1 when he burned the Saints for what was thought to be the go ahead touchdown in the final seconds of a terrific Monday Night Football game. In the following weeks his usage stayed hovering around 40%, giving fantasy managers only boom or bust production on limited targets. That was until his usage spiked in week 3 at 54% where Stills went 4 for 89 yards on 6 targets versus a Chargers depleted secondary. After a glimpse of hope that he would see even more snaps, a hamstring injury put Stills on the shelf for the remainder of the loss to the Panthers in week 4, and then sidelined him in weeks 5 and 6.

The Texans were fortunate to have Stills fully healthy in week 7 and unless you were living under a rock, you would know that Houston Texans field stretcher Will Fuller went down early last week with what seems to be a pretty severe hamstring injury (surprise, surprise). Enter Kenny Stills, the Texans insurance policy for the frail Fuller, who replaced the injured speedster with 4 receptions for 105 yards on only 5 targets.

If you read the tea leaves, all signs point to Stills being heavily involved this week. He reached a season high 94% of the snap share and went over 100 yards receiving for the first time in 2019.

With Will Fuller seemingly out for several weeks, Stills will be a lock as a wide receiver 3 or flex option in most fantasy line-ups moving forward. Fuller and Stills have had a similar average depth of target this year and Fuller had seen at least 6 targets the last five games in a row. I’m not saying they are the exact same wide receiver as I feel Stills can do more things on the field with better hands, but the target void is there for him to fill. He will step into two wide receiver sets along with Deandre Hopkins, giving Watson more experience on the outside. Both wide outs entered the league at the same time back in 2013.

Daryl Worley, who runs a 4.64 – 40 yd dash, will most likely be given the difficult task of covering the speedy Stills this week. With the Raiders boasting a league worst 32 pass plays to go for 20 yards or more and Stills tracking the ball with the greatest efficiency of his career since his days in New Orleans, I would not hesitate to start him in this smash spot.