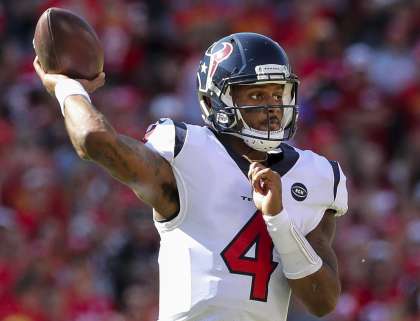 Over the course of the last two weeks Deshaun Watson has the Texans offense humming and he’s begun to make his case for league M.V.P.

Watson’s preparation since leading his offense to a mere 10 points against the Panthers in week 4, where he was also sacked 6 times, has been rivaled only by his intelligence and decisiveness on the field as of late. Since then the tables have turned as he has not been dropped once and Houston has put up 84 points over that span.  One reason Watson has remained spotless in his last two contests has been the addition of Laremy Tunsil. A new left tackle, along with the ball coming out of his hands quicker and the offense running more plays out of empty sets, has amounted to great success.

This week Watson travels to Indianapolis to face a divisional foe he beat in overtime (37-34) the last time he visited. The voice of public reason would be quick to remind me that the Texans would go on to lose their next two meetings, a 24-21 regular season game and 21-7 playoff loss. I would rebut by adding that Watson was without play-makers (Fuller, D. Thomas, Coutee) and a banged up Hopkins in one or both of those contests. He was also “protected” by one of the worst offensive lines in football at a time the Colts defense was peaking.

This time around the Texans offense boasts a plethora of skill players. New-comers Carlos Hyde, Duke Johnson, Kenny Stills as well as the healthy trio of Keke Coutee, Will Fuller and Deandre Hopkins, will all be at Watson’s disposal this weekend.

Last week against the Chiefs Watson’s recipe for success was on the ground. He added 2 rushing scores to go along with his 280 yards passing and 1 TD through the air. He would’ve had an even greater day had it not been for 4 dropped touchdown passes (Fuller 3) (Hopkins 1) and 114 lost air yards as a result. I wouldn’t expect Watson to scramble too much with Darius Leonard looming in his return from a 3 game absence.

While the Colts pride themselves in not giving up the big play, Watson is smart enough to take what the defense gives him. That means quick reads and high levels of execution underneath. Watson is a student of the game, continually seeking to absorb more knowledge about his opponent in order to gain an advantage, and he’s only getting better. Because of that the Texans have upped the usage of empty sets in their recent success, matching the amount of snaps taken in that formation over the last two weeks with that of the first four games. And why wouldn’t they? Watson has completed 90.5% of his passes with an average of 9.2 yards per reception in those formations. The wide receiver crew has been stacking on empty sets, finding room versus both zone and man coverage as Watson has been nearly perfect in diagnosing the situation and then delivering the ball exactly where it needs to be.

The Colts will still be without Malik Hooker in the secondary and have allowed 3 of the last 5 quarterbacks they faced to finish inside the top 12 in terms of fantasy production. The two that didn’t make the cut were Marcus Mariota and David Carr. As previously mentioned, the Colts like to keep everything in front as they have allowed a 69.9% completion rate to QBs this year, Watson has a 71.4% completion mark on the season. This bodes well for players like Coutee and Johnson to be hot reads and check downs in most cases, but don’t think Watson wont take his shots downfield when given the opportunity.

I don’t need to tell you that Watson is a great QB, but you might need to be open to the idea that he’s the greatest QB in the league right now.

The Colts (3-2) are coming off their bye week and the Texans (4-2) off a huge win. Only two teams have overthrown the Kansas City Chiefs this season, and they both come from the AFC South. The familiar foes square off in early afternoon divisional action at Lucas Oil stadium this Sunday.