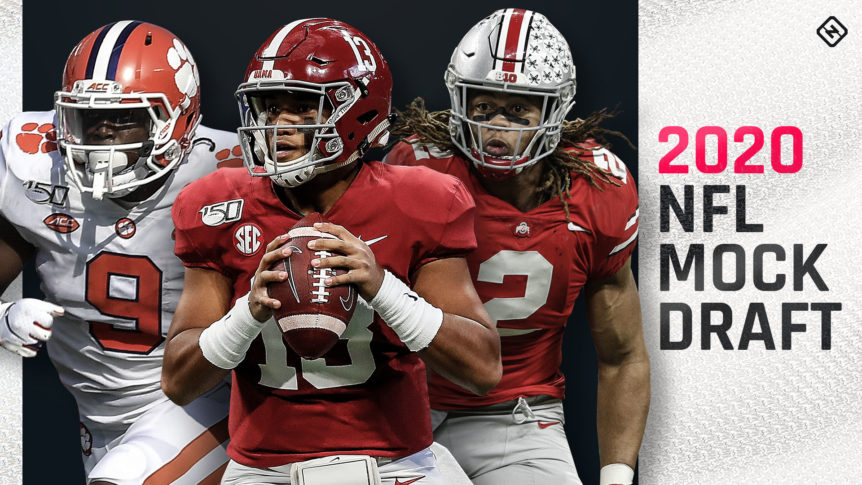 To not this is based off the current NFL standings, do not crucify me because your favorite team is projected to have either a high pick or a bad pick. So without any further a due let’s get straight into this Mock.

I do understand that the likelihood of a receiver going first overall is slim, however Jerry Jeudy is unlike any receiver we have scene. The closet comparison, made by many is Julio Jones, with his combination of Height Weight and Speed being absolutely insane and a once in a generation type of ability. Jeudy fills the biggest need on this team while providing young QB Dwayne Haskins with a great and reliable number one option.

Andrew Thomas is the best O-Line prospect I have scene in years, he is a tackle which means he has more value than a guy like Quentin Nelson. But, he has that same ability, the more we see of Thomas the better he looks. He plays against some of the best competition in college football and does it with what appears to be ease. Last year Thomas didn’t allow a single pressure against former top 10 pick EDGE Josh Allen.

The red rifle in Andy Dalton has taken his last shot in Cincinnati as he has shown to be decent but a team like the Bengals needs to draft top tier talent especially at the QB position because of their lack of market appeal. Tua is known by all as a big name and a great player, but the reason I love this pick is mainly because of the coaching. Tua is mature and still growing, and as Tua grows into a more stable and safe quarterback the new head coach Zach Taylor can prepare for his team to win.

Despite Rosen breathing some slight life into this dolphins abismal offense I do believe they will move on because of their lack of success. After Tua goes of the board there is no other decision as Justin Herbert would have been a top 10 pick last year he went back to school to grow and with that he did. Even with the very bad early season loss Herbert looks to have grown in his ability to read defenses, go through his progressions, and make quick decisions.

Ohio State just keeps churning out corners, some namely being Denzel Ward Marshon Lattimore and Gareon Conley. All respectable number one corners on their teams, and there is more than a decent chance Okudah can be better than all of them. Okudah really is a true number one corner as he possesses ideal size, length, physical traits, decision making, and technique. There isn’t any flaw in his game, the only corner that even remotely compares to is Jalen Ramsey as a technically sound athletic freak that has all the potential in the world.

The cardinals need to protect Kyler Murray, and Wirfs has the versatility to play either guard or right tackle. This may sound eirely similar to another prospect last year and that is Cody Ford, a mauler that is very powerful in the run game that if he cleans up his technique in the pass game he may be in the running for one of the best tackles in football.

And the fall stops, Chase Young by many is considered to be a top 3 lock however in this position none of the top 5 teams are in dire need for an edge but with Vic Beasley not showing any growth the Falcons are. This is the best possible fit for Young as he would stay in a 4-3 and he would compete for a playoff run from day one.

A little bit of a weird pick here however there is no offensive lineman I would take here and the Dolphins do need an edge more specifically a 3-4 OLB, and last year I said Brian Burns would fill this role nicely and what do you know I would be completely correct. So now the dolphins have to fill that need and don’t get it twisted Okwara is a more than capable Pass rusher than has a multitude of moves than can get him to the QB. However his limitations go as where his athleticism can take him.

The ravens go back to the well even after drafting WR Marquise Brown last year. As Brown is a very speedy receiver that has big play potential, this then leaves the Ravens in need of a sure handed well rounded receiver and that is exactly what Ruggs is for Alabama as a 6 foot 190 lbs receiver Ruggs has a limited amount of upside but the enticing fact here is that he has a very very high floor.

The Eagles fill their biggest need as Ronald Darby and Sidney Jones have been burned torched and flamed all over again through the first 4 games. Henderson is a physical corner who loves to get into a receivers face at the line to shut him up. While this does have the tendency to draw many flags and having a decent chance of getting burned over the top Henderson has great length and  make up speed to shut these concerns down.

Even this late into Philip Rivers career I still believe he cab go a little bit longer. While having a good quarterback is very important protecting him is probably even more of issue and with this pick the chargers do just that as they draft a monster of an O-Lineman as Trey Adams stands at 6’8 while weighing in at 327 lbs. Do I need to say anything else?

The Colts may look for a QB here but there is just too much talent left on the board at a massive position of need. Derrick Brown is more than likely a top 7 player in this class and he is sitting there at 12 because of certain team needs. Brown is a monster in the run game as he plugs up and fills gaps better than any other DT in this class. However his versatility is the reason for this pick, as a interior lineman most people expect a lack of pressure but Brown provides an abundance of it.

Walker Little has been a very reliable tackle at Stanford for years as his ability to be technically sound while also being an athletic freak gives him the ability to be one of the best and most valuable offensive lineman in this class. As for the titans many see it fit that they replace Mariota as he is behind a good O-line and he hasn’t done much however with the Titans already declining Jack Conklin’s 5th year option the likelihood he hits free agency is high meaning the need for a starting caliber right tackle is immense and Walker Little fits that niche very well.

A top 3 talent falls to 14 and again I have the panthers nabbing a steal for the second straight year, This is more so because of the lack of positional value that the safey position has. Looking at the way Derwin James fell a few years ago I can see a similar situation playing out. However there is a chance that teams don’t want to miss out on a talent like this and have learned from the Bucs mistakes in not drafting James

This pick was very hard for me as the Giants need so much on defense but Danny Dimes also needs a no.1 receiver and I understand that it is quiet concerning to see a team trade away a no.1 receiver and then go back to draft another one. But Shenault has all the talent in the world, he really reminds me of JuJu Smith-Schuster as a big slot that has questions when it comes to his speed but his technique and route running allow him to be very successful

Epenesa is one of the more versatille EDGE rushers I have scene in the past few classes however his combination of size and speed allow him to play on either DE spot. The Jags will need help here as the only signs from Calais Campbell appear to be regression and Yannick Ngakoue is going to be a free agent after this season. The jags get a productive and solidified pass rusher that has much versatility and had it not been for Chase Young he would be a lock for a top 10 pick.