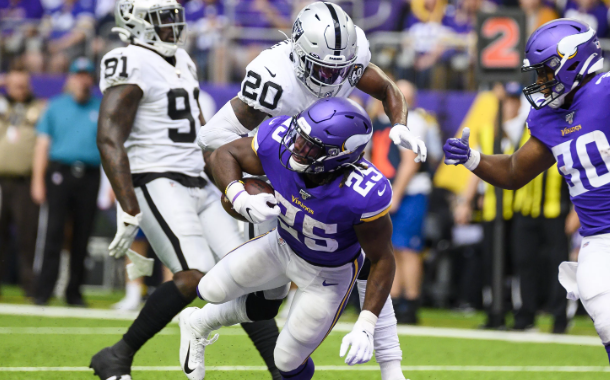 Another week another loss. The Minnesota Vikings took Oakland to school in the start of their 6 game stretch away from home. This was a horrible showing by Oakland and on my last article I talked about the Raiders needing to stop Dalvin Cook, needing to create turnovers and unleashing Josh Jacobs.  None of these happened and Oakland once again looked like a team on its way to a losing season. It is so disappointing and angering as a Raider fan to see a performance like this but it is what it is. On this article I will go over my observation of Oakland’s Week 3 loss against the Vikings.

Why is Josh Jacobs not getting fed the ball?

Josh Jacobs was averaging 5.26 yards per carry coming into week 3 and as a 3 down back I expected him to be on the field more during this game. Today Jacobs only had 10 carries for 44 yards. Even with that total he is still averaging 4.4 yards per carry. Okay maybe it has to do with his groin injury or even the illness that he was dealing with last week. Maybe it’s John Gruden’s play calling that limited his time on the field. Regardless if healthy and able, Gruden needs to explore using Jacobs more like they did against the Broncos and start letting the kid go out on routes. The running game is important and Jacobs needs to have a bigger role in this offense especially with his yards per carry.

Gruden must adapt to the situation and change his play calling during the game.

It feels like John Gruden walks in to games only sticking to plays that works in practice. They were very predictable and forced. It also didn’t help that the personnel on the field failed to execute their orchestrated playbook. It was obvious that the Raiders game plan was to give the ball to Waller and wish someone else make plays outside of that. John and his coaches need to do a better job on analyzing the opposing teams defense and take a risk in changing his game plan base on the situation that is being presented. It’s okay to substitute players that are struggling on the field instead of letting them get burned over and over and over and over. I am no coach nor an expert but Gruden’s play calling has been suspect based on what I’ve seen so far this year and last year. I still believe Gruden’s master plan doesn’t come into fruition until 2020 in Vegas but goddamn its rough to see as a Raider fan.

Defensive inconsistency will make this a very long year

The Raiders defense has still not produce a momentum killing turnover for the opposing teams. Interceptions are yet to be seen when it matters and sacks were nowhere to be found in this game. The Raiders did a great job against the pass week 1, great against the run week 2 and okay against the pass this week. They gave the Vikings 23 first downs and allowed their running backs break for long gains totaling 211 yards. That is a straight shit show and once again Oakland’s defense had a hard time producing 4 and outs and gave 1st down presents to the other team. The Dline was getting worked and the secondary looked average at best. Jonathan Abrams going to IR hurt us big time. We definitely need his confidence and swagger to help this young team get some juice. I know the Jags don’t want to trade Ramsey but I think at this point Oakland should trade one 1st round pick, a 3rd round pick, and Worley to improve the secondary.

There are no #2 receivers just Waller

I’m not complaining that Waller has been a very productive Tight End for Oakland but the receivers need to get their shit together and step up. Tyrell has been good but in times like today where he isn’t getting any breathing room, Renfrow and JJ Nelson need to play harder. It looks very thin now that Antonio Brown is out of the picture. Outside of the week 1 win against the Broncos the Raiders are having a hard time finding a WR2. Maybe it’s time to start looking at the free agency or even at a guy already in the organization…… Keelan Doss. I get that he is still raw but give the guy a chance. Give him some reps, let him make mistakes on the field but don’t keep him completely out of it. Repetition will help him get better and hopefully become a more reliable option than what we currently have.

I hate to say this but Derek Carr worries me a little bit. I don’t know what happened between Week 1 and today but something is off. It could be the Raiders inability to create the run game, the Wide Receivers being taken out of the game, getting sacked 4 times or him just being basic as fuck. I like Derek and I’m just disappointed in his play the last two games because I know he can do better. We need the 2016 Derek Carr before the injury, the one who wasn’t scared to take a risk, the one that extended plays and made 4th quarter come backs like no one’s business. That’s me being a passionate Raider fan but the reality of it is that this ain’t no Jack DelRio show and if Derek does not produce winning numbers this may be the last season we see him in Silver and Black.

Overall, this week was whack. We got shitted on by a good team with a great defense. The Raiders need to win 2 or 3 of their road games but the way this schedule looks we may get one if we are lucky. I hope I’m wrong but can’t fake the funk no more. On to the next one and let’s get a W.