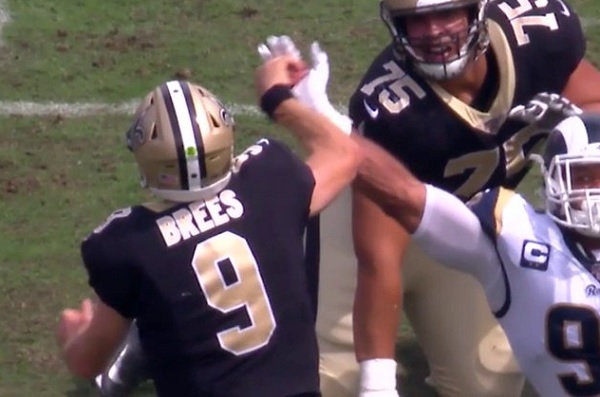 40 year old Saints future hall of fame QB Drew Brees met some bad luck on Sunday, after a quick pass down the middle, Brees had his thumb smashed against Rams defensive tackle Aaron Donald. What was suppose to be a revenge game against the LA Rams, turned into disaster for the Saints season.

Drew Brees tore a ligament in his throwing thumb and went to Los Angeles hand specialists for an examination. Reports are he may miss about 6 weeks of playing time, but Brees could not even grip a football on the side line and I do wonder if he will be able to grip a football and throw in just 6 weeks of rest.

Backup QB Teddy Bridgewater came in for Brees and didn’t play well. Throwing under 60% and fumbling the ball, not able to score a touchdown.

Bridgewater is expected to be the starting QB against the Seahawks in week 3.

Saints fans desperately hope that Bridgewater can keep them competitive over the next 6 weeks or beyond. The Super Bowl window is closing fast for this team.