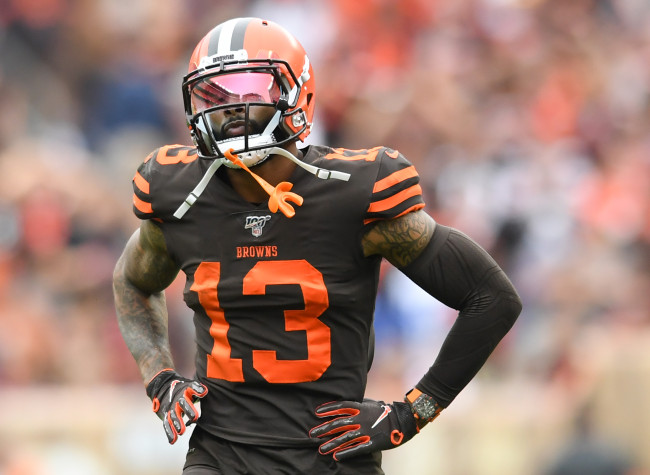 As if the Browns’ didn’t have enough problems going forward, it looks like Odell Beckham Jr. isn’t done trying to create distractions. I imagine Odell saw all the attention that Antonio Brown has been getting, and he decided to make headlines by wearing a 190,000-350,000 dollar “Richard Millie” watch on the field.

The NFL, predictably wants Beckham to play without the watch, NFL Network reports that the accessory violated a league rule that prohibits hard objects Beckham told reporters “I’ll still be wearing it, the same way I wear it every day I go to practice, when I go here, I go there, been wearing it. Take a shower with it on. It’s just me.”

Spoken like a true diva. Beckham also plans on talking to the NFL because according to him, wearing the watch, isn’t breaking any rules.

“You got to look into the rule book. It says you can’t wear any hard objects. The watch is plastic,” Beckham said. “People have knee braces on that are hard and made out of metal. You don’t see them taking them off. Everyone has jewelry on. So, I’m good.”

Beckham may have a point, the leagues enforcement of jewelry and accessories has been getting more lax year after year. Personally, as a viewer, I don’t care if wears the watch, though some of you might.

I don’t think it’s a big deal wearing the watch, but I do find it typical and embarrassing for the Browns and Beckham that after a brutal loss, wearing his watch is something that is important to him. As if the Browns didn’t just show us that they have a lot more problems(see https://rumboyz.com/blog/2019/09/09/5822/ ) from top to bottom than we thought, now Beckham’s watch has to be a priority during the week.

Beckham thinks the NFL is targeting him specifically, and it’s possible.

The NFL has been known to be aggressive towards star players when it comes to punishment, and if players are wearing wristbands, earings, necklaces, why can’t he wear a watch?

The problem remains, the Browns got blown out and this shouldn’t even be something Beckham is worried about.

Baker Mayfield made headlines calling out Duke Johnson in the beginning of the year, I notice how he’s oddly silent on this issue.

When the Browns were a run-first team last year, the defense was opened up for Baker Mayfield and he’d post incredibly efficient games. This week he targeted Odell Beckham Jr 11 times for 7 catches and 71 yards, Baker threw 38 times and the Browns lost. Maybe The Browns should pound the run game and then try to build some chemistry against the Jets. This should be an easy win for them with Sam Darnold out(https://rumboyz.com/blog/2019/09/12/sam-darnold-out-indefinitely/) and hopefully Beckham is focused on winning, not a wrist watch. Hall of Famer Warren Sapp said it best this week, “You can’t wear a 350k watch and play like a $2.”