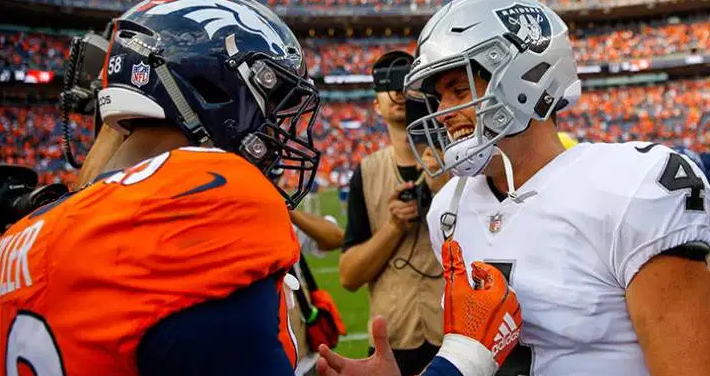 The Denver Broncos have prided themselves in recent years on an elite pass rush. This is a defense who in 2015, just won a Super Bowl led by Super Bowl MVP Von Miller. Well, four years later, the pass rush may be running into some potential issues. Despite drafting pass rushing linebacker Bradley Chubb, and resigning Von Miller to an extended deal, the Broncos have been underwhelming in recent years, and in week one against the Raiders, the Broncos defense was rather pathetic, at least early on.

“My job is to sack the quarterback and I didn’t get to him once, not even a quarterback hit,” Broncos Defensive Captain Von Miller said to the press. “Disappointed in myself on an individual level. They were throwing the ball quick, but we have to find a way to get there.”

This was the first time the Denver Broncos didn’t record a sack since 2017, they didn’t even touch Derek Carr. Masterful job by Tom Cable and this offensive line but Broncos fans have to wonder if this is a trend, and if their team is trending downward.

Vic Fangio in his first game as head coach of the Broncos got worked by Jon Gruden.

Broncos QB Joe Flacco looked lost in the first half of the game, but finished with 268 yards and a touchdown, his limited play was not the only problem for the Broncos. On only 11 attempts, RB Phillip Lyndsay was never able to get going, and the offense could never come back after this goose egg first half.

Many Broncos fans would love to squeeze one more Super Bowl run out of Von Miller, Chris Harris and this defense, but this was not a good start.

Von Miller has had nothing but good things to say about his opponents this week;

“We all know Derek Carr, when you protect him and (he) can go through the reads, when he feels comfortable back there he’s one of the best quarterbacks in the league,” said Miller on a conference call via heavy.com and twitter.