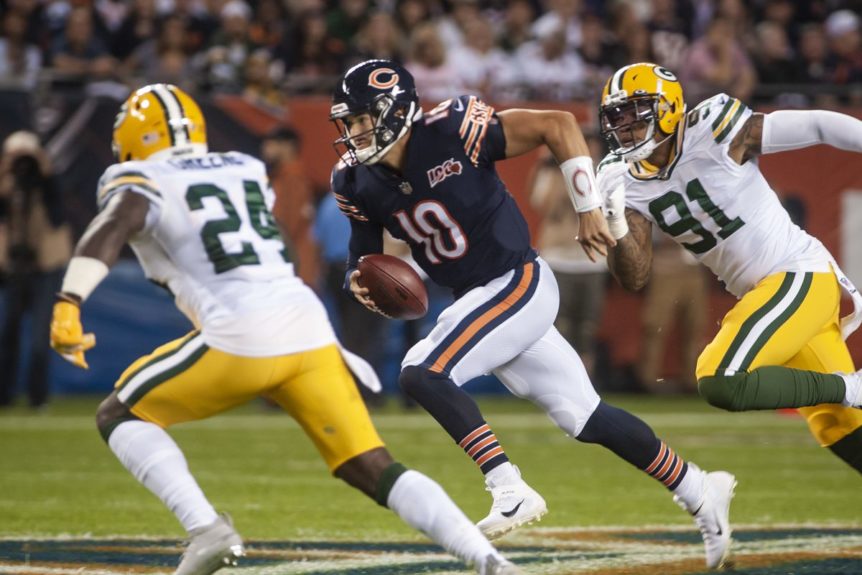 It appears Bears Head Coach Matt Nagy hasn’t learned anything from his only playoff game experience as a head coach. As I said in https://rumboyz.com/blog/2019/06/28/mitchell-trubisky-what-will-we-see-in-year-3-by-jd-bottorff/

The Chicago Bears should be a run-first team. The Bears threw 43 times in their playoff loss to the Philadelphia Eagles, and Matt Nagy, not learning from that game, decided to throw 45 times and limit Taric Cohen to 0 rushes while giving Mike Davis only 5 carries for 19 yards,and Montgomery 18 yards on only 6 attempts. 45 passes to 11 carries, this is not Chicago Bear football, it’s out of character for the entire franchise and it’s not a welcomed change, and I thought Matt Nagy knew this. Apparently he has a lot more faith in third year QB Mitchell Trubisky than even most Bears fans who have nothing but high hopes for the young man.

Bottom line, after that brutal 10-3 loss to the Green Bay Packers, where the offense, the side of the ball that Matt Nagy supposedly prides’ himself in, was by far the most ineffective part of the team. The defense, despite being thrown back on the field constantly against a legendary, hall of fame Quarterback in Aaron Rodgers only gave up 10 points. The Bears D Line was relentless up front, taking Rodgers down 5 times and knocking him down even more.

In 2017, Bears GM Ryan Pace traded assets to get Mitchell Trubisky, making him the first quarterback taken over Patrick Mahomes who no one really said was going to be as good as he is. But they also took Trubisky over Deshaun Watson who has continued to prove to be an elite passer, and much more effective than Mitchell Trubisky. I am not trying to come down hard on Trubisky, but I am sure even Ryan Pace can imagine how good the Bears would be if they had taken Mahomes or Watson. Especially considering the Bears are loaded with talent from top to bottom except at the Quarterback position.

This turned into a rant from an angry Bears fan about the state of our offense, vs the expectations we were given. Next week the Bears take on the Broncos, a team who just lost to the Raiders. If the Bears lose this game, this season could turn into a disaster. The Bears need a rebound here if they want to catch the Packers, the Vikings, and now even the Lions, who tied, but are still ahead of the Bears after one week.