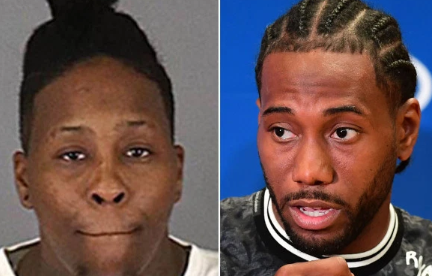 Kawhi Leonard is having a good off season in LA, signing a max contract with the Clippers, but many are wondering what is going on with his sister. Kimesha Monae Williams, 35 years old, sister of Kawhi Leonard, is being held without bail after her alleged involvement in a casino robbery Temecula, California on August 31st. Leonard, was not believed to be involved and is not charged with any crime. Willliams, and another woman believed to be Candace Tai Townsel followed an elderly woman in a restroom at the casino.

The suspects allegedly cracked the 84 year old woman’s skull, took her purse. The attack left the woman dead. The purse they stole contained “$800-$1200” according to Press Enterprise.

“Williams has a violent history and targeted a feeble elderly female and robbed her,” an investigator wrote in a report, according to the newspaper.

The reason for no-bail was due to Williams family connection of Leonard, and was stated clearly by investigators;

“Williams has family that are well off and could post her bail of $1,000,000,” an investigator wrote, according to the newspaper. “I am requesting NO BAIL to assure Williams’ appearance in court and to keep innocent victims safe.”

Family members close to the situation are keeping Leonard away from the situation. Denise Woodard, Leonard and Williams’ aunt stated to one reporter “He didn’t have anything to do with this”

No further information at this time.