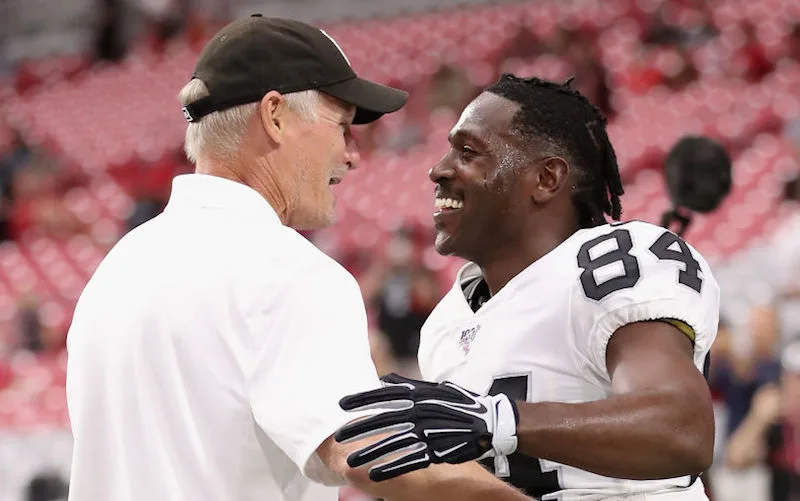 I used to watch DragonBall Z as a kid and at the end of every episode I’m always intrigued and excited to see what’s next for my favorite characters. My friends and I would then talk about it in our own interpretation and at the end of the day we were all entertained and hungry to see what’s next. Antonio Brown is social media, sports analyst and media’s Dragonball Z. Every Episode is something building to his character. The Oakland Raiders and the Nation hopped on this rollercoaster ride hoping that we get the best experience but only to be disappointed of how short and bumpy the ride was. I’ve always given AB the benefit of the doubt that the marriage with Oakland will work. Most fan base ridiculed the move after his last showing with the Steelers. AB was known to be a loose cannon and the Raiders rolled the dice to get one of the best receivers in the league. I’ll share my full analysis on this AB saga and what transpired this offseason all the way to the potential end of this ride.

As stated by Mayock and Gruden, AB wasn’t initially in the Raiders offseason plan. The timing and monetary status just ended up to be right. As an organization, rebuilding and trying to get the best positional player was Raiders priority and getting AB for a 3rd and a 5th was a steal.

My thoughts: At this point in time knowing AB’s production minus his antics with the Steelers, the Raiders made a bold and solid move to acquire a very talented Wide Receiver. John Gruden spoke highly of AB and knowing that this could be Derek Carr’s last season, having that caliber of talent will help them fully analyze the next steps for their QB.

My Thoughts: A lot of people we’re acting surprise by this contract and was stating that he was being overpaid. AB felt like this was his self-value hence the reason why he ultimately left the Steelers. I applaud him for standing his ground on this and his play to me was worth the investment. This was a business move for AB and we see this happen more often in professional sports. One of the main reason why most people can’t justify this contract was because of AB’s character. This was a high risk high reward contract and the Raiders knew that.

We all got to see Brown’s frostbitten feet and what a way to start training camp. It was reported that AB did not wear the right protective gear when participating in a cryotherapy. The incident blistered up his feet and we got to see it in Hard Knocks.

My thoughts: Initially, I was like what the fuck. The media was really building this story and began to crucify Brown for making a dumb ass mistake. I really wanted to see him practice and build the chemistry with the offense and we come to find out and learned that this will keep him off the field for a couple of weeks. Then I think about the mistakes I make, hell I didn’t even know what a cryotherapy was until this whole thing happened. If I was brought to that place, I probably would have never known what to do. This was no excuse for AB and the media began his crucifixion.

The feet situation was all over the news and people all over ate it up. Everyday people were talking about it, the AB haters was out on full force and the nation was beginning to be divided on AB.

My thoughts: I watched plenty of AB segments, read articles and observing lots of comments on social media. One thing is for sure, the Raider Nation was all over the place on AB. Half of the fans already gave up on him and joined the rest by identifying him as a fucking clown. The other half shared a calmer approach and tried to be rational of what’s happening telling people to calm the fuck down. It is blood bath within the same fan base and It was really disappointing to see. At this point, I was still not sold on what the media was trying to paint AB. He made a mistake, something that will be healed. The media was blowing it out of proportion and all the perfect people in the world judged.

The next episode is AB needing to change his helmet for safety concerns. It was reported that AB tried to bring his old half ass painted helmet to practice and was advised he must find a new one. AB was also highlighted in Hard Knocks going over his feet and saying he felt like he was the “Enemy of the fucking Sate”

My thoughts: Oh boy, I had mix emotions on this one. I’m all for safety and AB should have just abide by what is asked and look for a new helmet instead of losing 2 arbitrations. The safety concept is not question more important and when I say split its more like 89% just change the goddamn helmet and 11% well I’ve worn shit before that may be less safe but I took the risk because it made me feel comfortable, it was familiar and I had some type of emotional connection to the item. And I strongly believe that’s what AB was trying to cry about. Plus, he already feels some type of way and thinks that the NFL was out to get him.

My thoughts: This is the first bad cop move by Mayock but was a very firm and solid statement. I’ve played team sports and when people buy in and give it their all I saw outstanding results. AB was checked by Mayock and called him out on his intentions with the organization. This is the first time I was able to see that Mike was not fully sold on AB and that he was getting tired of this shit. I loved it because I was hoping that AB heard the message loud and clear.

THE CONSEQUENCES AND THE TANTRUM

The Raiders fined AB for missing time during training camp. AB went on to post the fine, got into it with Mike Mayock and unfollowed the Raiders on Twitter.

My thoughts: This is some petty shit at this point I’m starting to eat my words and I’m starting to get really annoyed with AB. As a man, if you did the crime best believe there’s consequences. I wish AB just payed the damn bill and moved on. Instead, he went out of his way to do the most EXTRA shit and disrespected the GM. He also went on and make this a public thing, this is kinda when I start to feel like I was wrong this whole time. This was a very poor showing for AB and was a complete shit show at this point.

After the speculation of AB getting suspended, AB issued an apology to the team alongside the captains. They reported that this was an emotional piece and things seems to be okay.

My thoughts: Okay there may be some type of hope. AB bringing the Captains along his side helped him not get suspended. John Gruden seems to be happy let’s go.

THE TITANIC HAS FINALLY SUNK

Not even 24 hours since the apology AB releases a video of a conversation with John Gruden where he highlights John questioning if he wants to be a Raider. He then followed with do you want me to be a Raider. Then this morning Antonio asked to be released and the Raiders granted his wish.

My thoughts: This made me somewhat angry because I tried to defend this guy and try to understand where he was coming from having to deal with the world’s criticism. At the end of the day this was a business transaction to Antonio Brown. When he was made aware that his contract was no longer fully guaranteed he went on to say what he really felt. The apology was an act for him not to be suspended so he wouldn’t lose that money. Luckily the Raiders got out of the contract was not obligated to pay any of that which opens up their payroll to sign one or two guys that can help this team compete.

Overall, this was a very disappointing end. Just like the Titanic, the new shiny boat Antonio Brown had the potential to be something great with this organization. Everyone was there to watch and got on the ride. The Titanic named Antonio Brown unfortunately was not able to stay afloat when shit hit the fan and led to this relationship sinking not knowing what it could have been. I went on to engaged in conversation to try to sell Antonio Brown as a person. I think he is misunderstood, I think he is still one of the best receiver in the league and I wish Antonio Brown the best. I wish he is able to find his peace and be able to step on the field one last time and end his career in a good note. I hoped and I know a lot of the Raider nation is somewhat relief that it’s over. At the end of the day, the organization/team is not made by one guy. There are 52 other guys out there ready to play the game trying to prove their worth.

ANOTHER DAY ANOTHER BAD TRANSACTION LET’S GET BACK UP AND PLAY BALL LETS GO RAIDERS!!!!!!!!!!!!!!