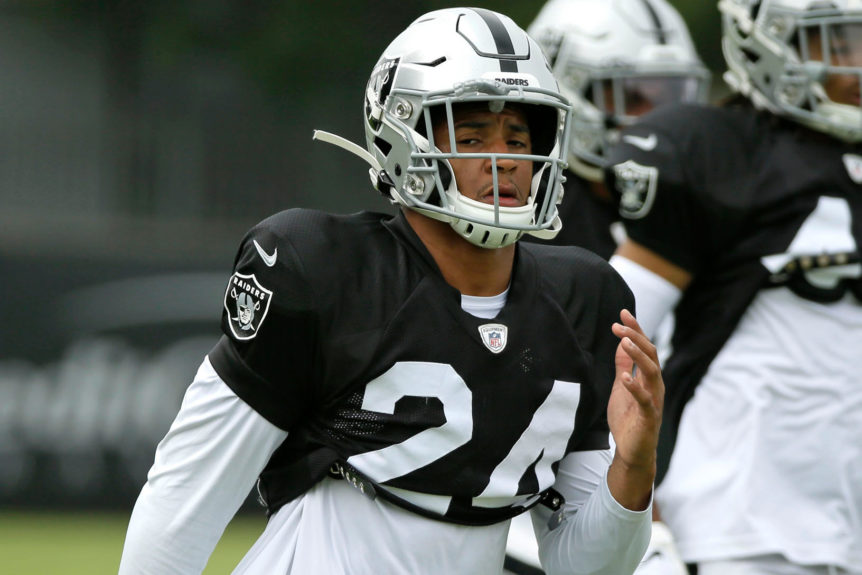 The preseason is finally behind us and during the last couple months of training camp, preseason games and Hardknocks the Raiders has finalized its 53-man roster. They now have the 9th youngest roster according to Raiderswire Luke Straub, a big turnaround from last year where the Raiders had one of the oldest roster in the league. The Gruden/Mayock era is in full effect and we get to see what that looks like on September 9 Monday Night Football against the Denver Broncos. This will be a great test for the Raiders to against a Divisional Rival at home. In this article I will go over my 3 biggest question heading into the match against the Broncos.

#1 Are the Raiders First Round Trio Ready to play high level football?

We saw a very small sample of these guys but when they were out on the field they managed to put together a strong showing. Preseason has become a tryout game for players that are in the bubble of getting waived or cut which makes it hard for fans to fully gauge at what level the starters are performing. Raider players, coaches and General Manager has a lot of great things to say about their first round trio and it is encouraging to hear it but seeing it in action will be more convincing.

The first of the trio is Clemson’s Defensive End, Clelin Ferrell. According to footballdb.com, Ferrell finished with 165 Tackles and 28 Sacks for the Clemson Tigers. Even with a production that he had with Clemson, many sports analyst ridiculed the Raiders picking Clelin at #4 overall. Outside of his obvious skills and upside, his character and leadership trait is what ultimately led Gruden and Mayock to select him that high. Clelin has a lot to prove and the Raiders are all in on him. He has big shoes to fill, one that Raider fans all over the world mourn to this day…. Khalil Mack. During his snaps in the preseason, Ferrell was able to penetrate and was all over Kyler Murray during the Cardinals game. He is still developing but he looked good during his snaps. His burst still needs some work; he needs to get off the line faster as he faces more athletic tackles down the road. Clelin has a lot of upside and only time will tell specially in the AFC West.

The Raiders don’t usually draft a running back in the first round but having 3 first round picks makes it hard to say no to Josh Jacobs of Alabama. He joins the likes of Marcus, Allen, Napoleon Kaufmann and Darren McFadden as a first round running backs drafted by the Raiders. Jacob’s was not the bell cow in Alabama but is the most versatile and was rank #1 RB in this year’s draft. He only had 4 carries in the preseason and he has not been featured in HardKnocks. Unlike the prototypical 1st round Running backs Josh Jacobs has fresh legs. He was used as a change of pace/situational player in Alabama but when he touched the ball whether through the ground or the air Jacob’s made defenders pay. Jacobs is expected to be a three down back for the Raiders and we will get to see how Josh reacts to a good defensive team like the Broncos.

The final and most vocal of the trio is Mississippi State hard hitting safety Jonathan Abrams. He is wearing the #24 once worn by the great Raiders of past such as Charles Woodson. Many people had Jonathan Abrams as the number one safety but his BOX SAFETY type of play limited his ceiling according to experts. Jonathan Abram is heat seeking missile and loves to be around the ball at all times. He is expected to start at safety with Karl Joseph. This man is electrifying and it is exciting to see what he can do.

#2 Are the Raiders offense ready to take flight?

Derek Carr and the offense had a massive make over from last year. The O-line has been upgraded and will only get better when the lineup reads Miller, Incognito, Hudson, Jackson and Brown. Incognito will be suspended for 2 games, while Gabe Jackson is currently recovering from an injury. Last year’s 1st round draft pick will play at left tackle and super bowl champion Trent Brown will be a bulldozer on the right. Of course the O-line is led by Pro Bowler Rodney Hudson who the Raiders just extended. The Raiders also has 5 brand new receivers in Tyrell Williams, Hunter Renfrow, JJ Nelson, Ryan Grant and Antonio Brown. It will be interesting what Antonio Brown will do playing away from the Steelers for the first time in his career and if his antics dies down during the season. Tyrell Williams will be a strong WR2 as he was with the Chargers and Renfrow also known as Third and Renfrow will be the slot receiver for Oakland. First round pick Josh Jacobs will be the 3 down back and hopefully his versatility can help the Raiders move the ball.

Overall, the offense is much improved on paper but the chemistry is yet to be seen. All starters have not even played a game with each other, not even in the preseason. I expect mistakes here and there but the receiving corps should help Derek Carr go test the deep ball early on and more frequently. The absence of both starting guard Gabe Jackson and Richie Incognito will test the Raiders Offense. Last year Carr got sacked and hit every game. Jacobs, Brown and Tight End Darren Waller must elevate their game in order for the Raiders to compete for wins specially in the AFC West.

#3 The strange case of Dr. AB and Mr. BIG CHEST (Dr. JEKYLL and Mr. Hyde). Who does the Raiders get?

Antonio Brown has been the biggest story of the offseason. I haven’t really talked about AB because I wanted to give him the opportunity to prove everybody wrong. However, everyday it’s something new and his bipolar persona will make you angry one day and excited the next. From the feet to the helmet and his recent altercation with the GM, Antonio Brown is proven to be a loose cannon. There is no telling on what he’s going to do next but one thing is for sure Antonio Brown can fucking play. Dr. AB and Mr. Big chest is just like the story of Dr. Jekyll and Mr. Hyde, same person but two different things. Dr. AB is the Hall of Famer who is no doubt one of the best receivers that ever played the game. His work ethic is the best on and off the field. His game tape and stats will show you why he is one of a kind. The toe drag swag and one hand catches will make you go nuts and give you your money’s worth. And then there’s Mr. Big Chest aka “the enemy of the fuckin state”, a walking destruction of character whose ego is larger than life. Mr. Big Chest does what he wants regardless of what people thinks and will go out of his way to do something EXTRA. He will throw temper tantrums, act irrationally and for sure make you scratch your head wondering WHAT THE FUCK. As for game one against the Broncos some say he’ll play some say he won’t. Whichever way it goes well either get to witness Dr. AB go to work and torch the Broncos or see Mr. Big Chest throw a fit flipping water jugs and yelling at his QB. Only time will tell which one the Nation will get.