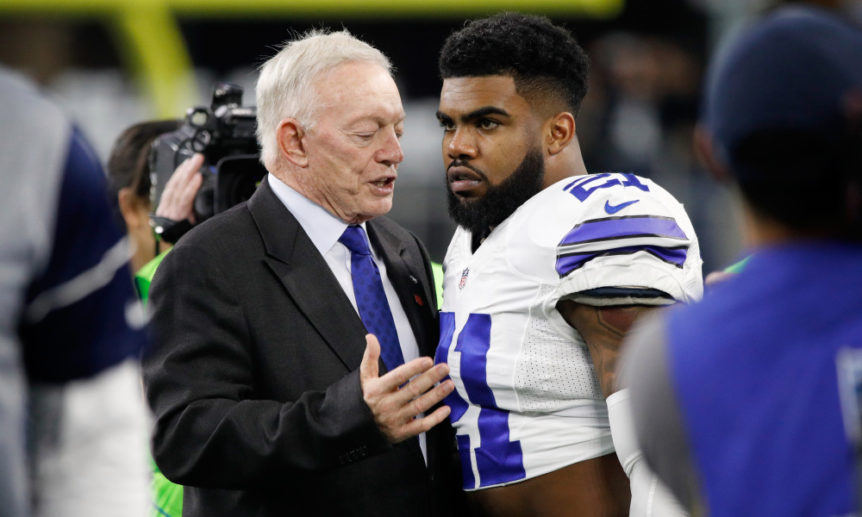 Ezekiel Elliot has been holding out this entire preseason. Elliot had two years left on his deal, but refuses to risk his health and future financial security playing on a rookie deal.

Many including myself can sympathize with Elliot because young star running backs seem to get the short end of deal when it comes to contracts. But I also think Elliot and the Cowboys situation are an interesting and unique case. A situation that may require patience, not something the Cowboys front office or their fans have shown as of late.

I suggested in my last article- https://rumboyz.com/blog/2019/08/30/why-the-cowboys-shouldnt-pay-prescott/ that the Cowboys, in order to truly evaluate the full value of quarterback Dan Prescott, should not sign Ezekiel Elliot for the first few weeks of the season. By doing this, you can see once and for all how much Dak Prescott is worth. For instance, if Prescott put up a four game stretch of 300 yards a game, a few touchdowns and your team is 3-1. Not only do you feel better about paying Dak more money but Jones and the Cowboys can approach Elliot and his agent with more leverage and the knowledgeable that you can win without Zeke.

Also, if Prescott fails or is average without Elliot, you can spend what money you could on Ezekiel Elliot to get him back, and then use his failure without Elliot against him in his long term negations saving millions on the cap.

The evaluation of Dak Prescott’s future with the Cowboys is the first thing that Jerry and Stephen Jones gave up by signing Ezekiel Eliot. This cost has potentially doomed them to the full fate of Dak Prescott and Ezekial Eliot if they cave to Prescott as well. Why wouldn’t they?

The second thing Jerry and Stephen Jones have given up by signing Elliot is the locker room’s business respect and control of players, they are essentially an NBA team. Now on the other hand, many players in that locker room are certainly happy for Elliot and his new contract. But the signing sets a new precedent for everyone in the locker room, and other players around the league.

In the NFL, not just on the Cowboys, you can get into trouble, misbehave publicly, get suspended by the league, not show up to practice or training camp or preseason games for weeks, in fact you can leave the country and not be around your team at all, and still get 50M guaranteed as long as you’re talented. There is little incentive in the NFL to behave off the field anymore, or even practice. Talent is clearly all that matters to some NFL teams, Jerry Jones speaking about players character was apparently nonsense.

The third thing Jerry Jones, Stephen Jones,  and the Cowboys gave up is their leverage going forward in other contracts, no one is taking a discount.  Jerry and Stephen Jones said to the media leading up to the Zeke signing was complete nonsense. They pretended he was going to take a discount, they said they were moving on from him, they said they felt “good” about their team without Zeke. But the Cowboys clearly didn’t. They caved into Elliot, who based on Le’Veon Bells’ experience wouldn’t get more on the open market overall. Now that everyone can see that the “plan” they claimed to have isn’t really a plan at all.

The Jones family drafted well yes, they’ve signed the right guys to help the Cowboys become a winner, but their plan has a lot more to do with hope. Their words now mean nothing, and really this is just about winning a Super Bowl now, one super bowl, not a dynasty. They know Ezekiel Elliot’s unique abilities gives them the best hope and they caved and went all in. Prescott, who now has even more incentive to get as much as he can despite the fact that he also wouldn’t get even close to 30M on the open market, should get franchise tagged going forward unless he wins a Super Bowl this year.

If they cave to Prescott, they won’t be able to pay anyone else, a Cowboys team who has so many young players on defense. Along with another offensive weapon that the Cowboys gave up assets for in WR Amari Cooper. The Cowboys need to take a stand here and not pay Prescott if he puts up low numbers and doesn’t win games for you, but instead just does enough not to lose them. One thing is clear in the Cowboys “plan”, they are now fully invested in RB Ezekiel Elliot.