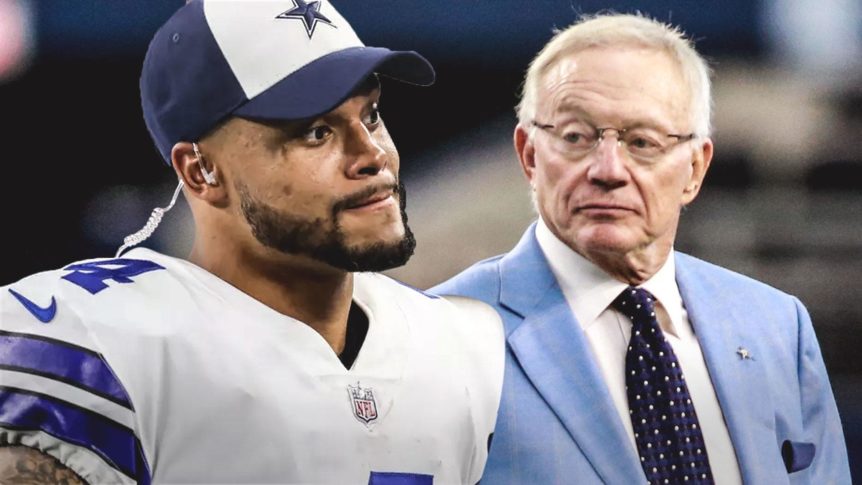 The Dallas Cowboys don’t need to pay Dak Prescott anything extra right now. First of all, what has Dak done besides win a playoff game with elite teammates all around him? Virtually nothing. Prescott threw for 67% completion % last year which is pretty good, but he only threw 22 touchdowns and 3885 yards. Dak has shown us nothing to prove he’s an elite passer or even an elite game manager, and now he is trying to capitalize off of his teammates success by asking for close to 40M. Asking for more money per year than Super Bowl Champion Russell Wilson and so many other quality passers in this league. Right now, If I am being totally objective, Prescott is worth 20M per year for 5 years. He is not elite, he is a placeholder who can win and provide your team with enough plays to win in the playoffs. Dak Prescott is a small step above Trent Dilfer, and Trent Dilfer was not the highest paid guy on his team, he wasn’t even close.

Dak Prescott may have a giant ego, or his agent may be trying to play the Jones family for all they can get, but if I am Stephen Jones and Jerry Jones I offer him no more contracts and I don’t sign Ezekial Elliot. The value you can get from watching Prescott play without an asset like Zeke may save the Cowboys 20+Million dollars in salary cap space. For the first time in history, Jerry Jones may be hoping his QB fails, at least enough to not pay him max dollars. We have seen a small sample size of Dak Prescott without Zeke and he averaged 186.8 Yards per game, 1 TD per game with 1 INT per day, with 63% Completion with 2 wins and 3 losses. With Zeke he is 62.85% completing passes, 1.7 TD’s and .6 INT’s per game with a winning record of 6-4.

What in the world, besides the wins makes Dak Prescott and his agent think they can get more money than Russell Wilson with those pathetic average game to game numbers. He doesn’t even throw 2 touchdowns a game, and has never thrown for 4,000 yards which is basically a requirement for starting QBs in 2019. Prescott is truly a below average to average Quarterback and is worth about half as much as he’s asking for. Here is the list of Quarterbacks in the NFL I’d rather have than Dak Prescott going into 2019-2020; Patrick Mahomes, Tom Brady, Aaron Rodgers, Russell Wilson, Deshaun Watson, Drew Brees, Matthew Stafford, Jared Goff, Phillip Rivers, Matt Ryan, Baker Mayfield, Carson Wentz, Ben Roethlisberger, Kirk Cousins, Cam Newton, Sam Darnold, Josh Allen, Derek Carr. If I am right about these QB’s being better than Dak Prescott, that makes him the 21st best QB in the NFL, and he’s asking to be paid as the #1 QB in the NFL.

Some of you Cowboys fans may be asking “what do you do then?”, because you want Dak for this season, you want him to play and to give your Cowboys team it’s best chance to win a Super Bowl this year, so don’t you just pay him? Just pay Zeke? No.

Any leverage that Prescott and his agent have created is artificial, and is being propped up by the Cowboys incredibly big and boisterous fan base who simply want to win a Super Bowl, and think Prescott has what it takes to get them there. Dak maybe can win you a Super Bowl, but you aren’t winning anything at all, you may not even go to the playoffs if you pay the man 35+ Million Dollars. The Cowboys need to pay their linebackers like Leighton Vander Esch, their secondary, they’ll have to pay Amari Cooper too, they traded for him, they need to pay him. This team has a bunch of good players like Byron Jones and Jaylon Smith, they have Zack Martin leading one of the best offensive lines in the league’s history. If the Cowboys are going to win a Super Bowl soon, it’s by doing everything really well, not just the QB position. In fact, there is an argument to be made that QB is the Cowboys weakest position, why should you pay big money for your weakest position?. Don’t.

Give Dak Prescott the entire year, make him earn it. If he has 35 TD’s for 4.2k yards, you can pay the man big money. But if he has another average year, draft a few QB’s, franchise Dak, and begin the process all over again. There is absolutely no scenario in which I would pay Dak Prescott for the production he has put out on the field so far. The last time a team was entirely unsure about their QB and he has to “prove himself”, Joe Flacco was the Super Bowl MVP. Does Dak Prescott have what it takes? I mean that’s what he’d have to do for Stephen Jones to correctly consider paying the 21st best QB in the league 35-40M a year. Also, if Cowboys fans’ are thinking that Dak will get money in free agency, then they are sadly mistaken. No one, and I mean no one, is paying Dak Prescott 40M, even 32M a year. Furthermore, what I think will happen is Prescott makes one playoff game, or Prescott leads the Cowboys to a .500 record, in which case the Cowboys should offer him 20M or below.