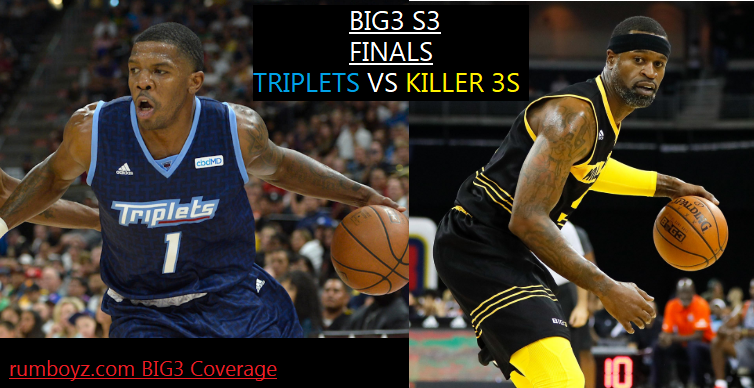 The BIG3 Finals are here. My predictions were mostly right last week, we have Stephen Jackson’s Killer 3s, and Joe Johnson’s Triplets. Anyone can win this one but the edge will obviously go to the MVP Joe Johnson who has lit up the 3 on 3 basketball world. Johnson can drop 20 points in the BIG3 in his sleep. Last game, he willed his team to victory with 26 points, 5 rebounds and 3 assists. Al Jefferson also had 10 points as the Triplets won against the 3 Headed Monsters who seem talented yet older and beaten up. I said in the BIG3 Playoff Preview that Mahmoud Abdul Rauf would have to play really well for the 3 Headed Monsters to have a chance. Mahmoud had 0 points, and Rashard Lewis wasn’t effective either. The teams’ points leader was actually Mario Chalmers with 14.

The Killer 3s had a more well rounded approach than the Triplets and hopefully that will serve them well going into the BIG3 Finals. Jackson and Greene led the team each with 13 points. They combined for 13 rebounds and Greene added 2 steals and an assist. CJ Watson was clutch and added some well needed points when it mattered, he finished with 12 points and 5 rebounds with an assist. Franklin Session got 8 points, Powell added 4. The Killer 3s will look to be dynamic with 5 different scorers again in the finals. Power didn’t put up much of a fight, former MVP Corey Maggette only had 9 points. Big Baby Davis and Jeremy Pargo both had double digit point totals, Davis finished with 12 points 2 rebounds and 3 assists trying to carry the squad as best he could. Mobley and Anderson didn’t play.

A big part of me wants to take the Killer 3s, I like their story, and I love Stephen Jackson for his swagger and his ability to be a TV analyst, so I admittedly have been rooting for the guy. But Joe Johnson is so damn good and he still has a lot of his NBA skills left, hes quick, he’s got a shot and he has elite footwork. Lisa Leslie the coach is exciting and ‘Iso’ Joe Johnson is electric, so give me the Triplets to win the BIG3 Finals. Will be a very exciting game Sept 1st 4PM EST on CBS.