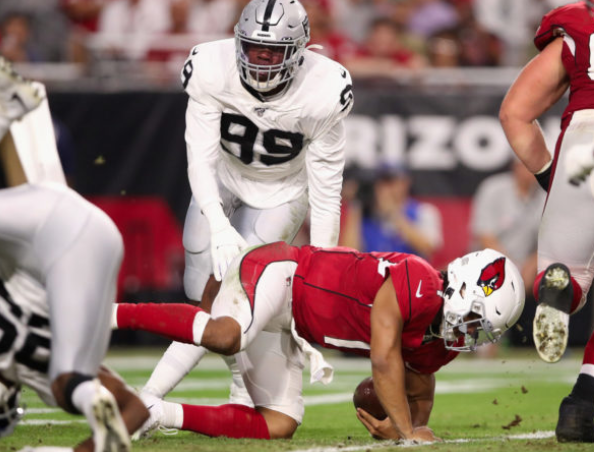 Oakland Raiders secure another win in the preseason against the Arizona Cardinals (33-26). Kyler Murray was the center of attention after his promising preseason debut in week one. Kyler went 6 for 7 totaling 44 yards and the Cardinals went on to beat the Chargers 17-13. Week 2 against the Raiders was a different story for Murray. Kyler was getting harassed by Paul Guenther’s defense as they sacked him twice including a safety in the second quarter. Kyler also had a rough night being called for two false starts and only going 3 for 8 in the air totaling 12 yards. That’s enough about Kyler Murray, I was just trying to be a smart ass because everyone hyped him up and I’m glad the Raiders showed up and made that offense look silly.

During the second Episode of Hard knocks, John Gruden said what the Raider Nation feels.

He said “Not a lot of people expect very much from us, do they… I’m tired man…it’s time for you to stick your foot into somebody’s ass”. 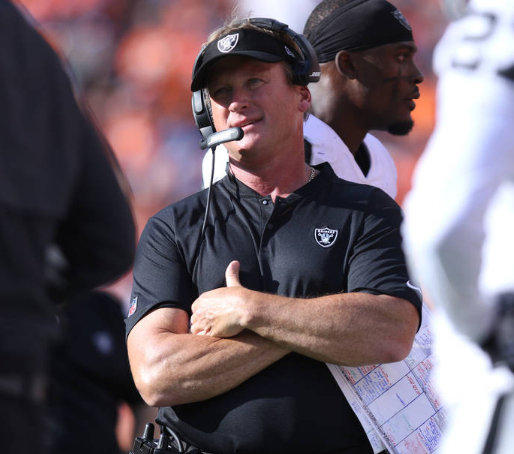 It’s true, our Oakland Raiders, unfortunately, has become a laughing stock the last 17 plus years due to the turmoil, poor management, bad drafts, bad contracts, you name it. As a die-hard Raider fan, I acknowledge, know and lived through all that. This is why sports casters, the news, and other fan base are clowning on the Silver and Black. It is exhausting and to Gruden’s point, it’s time for these 2019 Raiders to prove everyone wrong.

This game was another good showing for the defense who held Arizona to 0 points when Kyler Murray was in for Quarterback. The young and new Raiders was seen putting a lot of pressure and winning battles in the trenches. Lamarcus Joyner was making an impact in the secondary and highlighted in the sack that caused a safety. When the first-team defense was on the field, they forced 3 and outs even when Clelin Ferrell gave 2 first downs due to illegal used of hands. Although it was just a preseason game, it was good to see the Raider defense put some pressure and make plays early in the year.

The offense also looked good. In their first drive, Derek Carr led the Raiders to a touchdown. His two passes were caught by Tyrell Williams and Ryan Grant. Williams had a beautiful catch by the sideline for 27 yards and Ryan Grant finished the drive with his 13-yard touchdown reception. Mike Glennon had a bounce-back game throwing for 2 touchdowns including a beautiful 53-yard touchdown pass to Rico Gafford. We also got to see Josh Jacobs and this kid looks solid. He had 4 carries for 21 yards and the consistency of 6-yard gains is exactly what the Raiders need in the run game. For the second week in a row, the receivers looked very deep. 14 receivers caught the ball and undrafted rookie Keelan Doss continues to make a strong push to be part of the final roster.

Overall it was a good win and a good showing for the Raiders defense. The wide receiver position is by far going to be the hardest cuts to make since everyone in the roster seems to be promising. My prediction is that Grant, Nelson, and Doss make the cut to complete the corps with Brown, Williams, and Renfrow. Let’s enjoy the win and I can’t wait to see the next Episode of Hardknocks. Go RAIDERS!!!