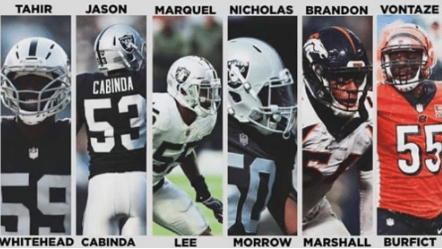 Is Burfict and the rest of the Linebackers enough to help the Raiders with covering Tight Ends and stuffing the running lanes?

The Oakland Raiders have been rebuilding their defense since their last Super Bowl run in 2002. Every now and then the Raiders are able to sign, trade or draft a potential franchise player but fail to surround them with key pieces to create a complete defense. Most recently the Raiders drafted a generational talent in Defensive End Khalil Mack, but his era ended when John Gruden traded him to the Bears last season. Now the Raiders are back at the drawing board and once again starting what feels like a never ending rebuild. I feel the pain Raider Nation as I am a diehard fan as well and I’m hoping that this season John Gruden can give Oakland the farewell they deserve. In this article I will go over the Oakland Raiders Linebacker.

Let’s start with Vontaze. He is hands down a perfect Raider, he is nasty, edgy and just a straight image of the old school renegade/outlaw Raiders. He also played for coach Guenther making this signing somewhat of a match.  However, we all know that Burfict comes with some baggage from his time with Cincy and the Nation is hoping that we get a better version of him. Vontaze is no doubt talented but his on and off field antics has made him a villain in the NFL. Burfict did not have a good year last season and his stats suffered. Per NFL.com, Burfict only totaled 33 tackles (solo and assist) and no sacks. With injuries and age playing as a factor, Burfict may not be the answer for coverage but can still be an asset against the run. His aggressive and smash mouth persona can be a factor in how the defense operate and may strike fear in the opposing team. We can only hope that we get the Pro Bowler version of Burfict minus the suspensions and unnecessary penalties.

As for the rest of the line backers, new addition Brandon Marshall also had a down year last season with the Broncos. Marshall is slotted to start as the Weak Side Linebacker and I’m not quite convinced that he would be an upgrade in that position. Last year Marshall struggled in coverage and missed tackles for the Broncos which eventually resulted in his release this off season. Tahir Whitehead, Marquel Lee, Jason Cabinda, Nicholas Morrow are all returning to the Silver and Black. Last year this cast was not very effective against the coverage and often times gave up big runs through missed tackles. Tahir had a lot of tackles but most of it is because the Raiders Offense cannot stay on the field. On the bright side, Tahir had a strong showing towards the end of the season last year. Per Pro Football Focus, from Weeks 11 to 14 Whitehead ranked 10th among all linebackers with an 82.3 overall grade. It will be interesting to see how Tahir manages the strong side with Burfict forcing runners to go outside. Lee and Morrow showed flashes that they belong but they need to get better this year and be able to step up when their numbers are called. They struggled with defending the pass and gave up some big runs.

Lastly, the one Linebacker that intrigues me is undrafted rookie Te’von Coney. According to Footballdb.com, Coney tallied 123 tackles and 4 sacks for Notre Dame and was one of the most efficient defenders in that team. I watched his highlights and a couple games on YouTube and Coney seems to have a really good vision against the run. He was also able to penetrate and finish his tackles with a good wrap. Coney in my opinion will make a play for the #2 spot behind Burfict and may one day become the starter at the Middle. 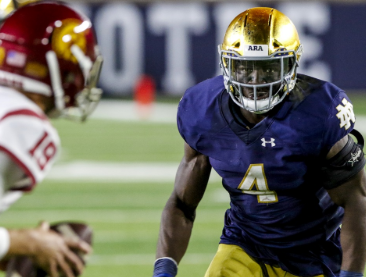 Overall, I was hoping the Raiders would upgrade the LB corps through the draft. The addition of Burfict and Marshall are somewhat a safe move due to familiarity and experience. As far as the coverage there is not a LB in this group that is an elite defender against the pass. AFC West has Kelce, Hunter and now Fant, the Raiders will get torched if they can’t manage these Tight Ends. If some way, somehow Burfict regains his 2013 form, then the Raiders may be able to regain its mystique. The run game will be okay; Burfict’s aggressiveness hopefully rubs off to the rest of the linebackers. Tahir is a tackling machine and Marshall can complement him on the weak side. This group will be tested early on and has the potential be good but only time will tell if this experiment is a failure or a success. Either way I ride or Die with my Raiders and hoping that Gruden will MAKE THE RAIDERS GREAT AGAIN.

Please feel free to send me a feedback on the content or leave a comment if there is something you would like me to review. Stay tune to the my next article.