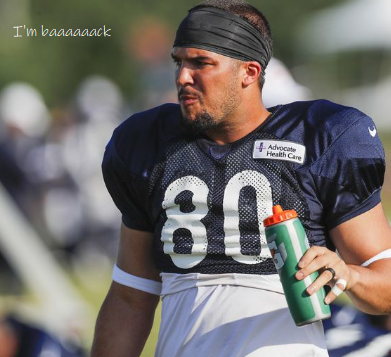 Chicago training camp was happy to see their potential star tight end Trey Burton return after recovering from a sports hernia surgery in the off season.

Burton, 27, was undrafted when the Eagles picked him up in 2014. After a few years as a backup, along with a Super Bowl ring, the Bears signed him to a 4 year, 32Million Dollar deal.

Chicago, with Burton, an improved defense and a new head coach, won the NFC North last year, and are considered by many to be a Super Bowl contending team going into the 2019-2020 season. Chicago will need Burton to play his very best at the tight end position for the team to find success in the Super Bowl. They will need every position playing their best and that’s what they are hoping.

To learn more about Bears Camp, Click on https://rumboyz.com/blog/2019/08/06/jd-reporting-from-chicago-bears-training-camp/